Why Trump Dumped the Iran Nuclear Deal and What It Means

On May 8th, Donald Trump made the greatest foreign policy blunder of his Presidency (so far): he pulled the U.S. out of the Iran Nuclear Deal. It’s not hyperbolic when pundits and politicians call this decision a disaster, but what make it so disastrous?

Before going any further, it needs to be said what makes the Iran Deal (officially called the Joint Comprehensive Plan of Action, or JCPOA) worth saving. Without getting into the jargon of centrifuges and heavy water, it can be said plainly that the deal has blocked Iran’s path to a nuclear weapon. Negotiated by the U.S., Iran, the UK, China, France, the EU, and Russia, the deal ensures that Iran’s path to a nuclear weapon was stopping by intense monitoring, detailed verification, and a suite of incentives. Since the start of the agreement’s implementation, in 2016, international regulators and national intelligence services have all verified Iran’s compliance. Beyond furthering the cause of nuclear nonproliferation, the deal also marked an easing of tensions between the Islamic Republic and the wider world, which is critical to regional stability. In short, the Iran Deal is working at keeping the world safer.

To get a sense of what a misstep pulling out of this agreement is, it’s worth looking at the circumstances that led to President Trump’s decision. Afterall, as many high school history textbooks will tell you, the past is prologue.

Since taking office, Trump waived sanctions related to the JCPOA 3 times, ensuring the U.S. would remain in compliance with the deal. However, Trump accompanied each announcement with increasingly belligerent and frustrated rhetoric, signaling time and time again that he wanted to drop out of the deal.

What’s changed in the past few months? Trump has been working hard (I know, the concept of Donald Trump working hard seems absurd) to build himself a War Cabinet. Instead of assembling a group of advisors to offer safe counsel and differing opinions, he’s surrounded himself with partisan hacks and fringe extremists. The two most disturbing members of the War Cabinet are National Security Advisor John Bolton and Secretary of State Mike Pompeo.

If John Bolton’s name sounds familiar, that’s because you heard it in the lead-up to and execution of one of the U.S.’s worst foreign policy blunders of the past several decades: the Iraq War. Bolton was a key architect of this disastrous conflict, selling lies to the international community to get their buy-in on the Bush administration’s war plan. Well, at least he’s consistent – the dude still thinks this tragic quagmire of a war was a good idea. Having learned nothing from his past folly, he has consistently advocated for military engagement with Iran, going so far as to author a piece entitled “To stop Iran’s bomb, bomb Iran.” Bolton has also referred to the Iran Deal as a “debacle” and advocated for forcible regime change in Iran. 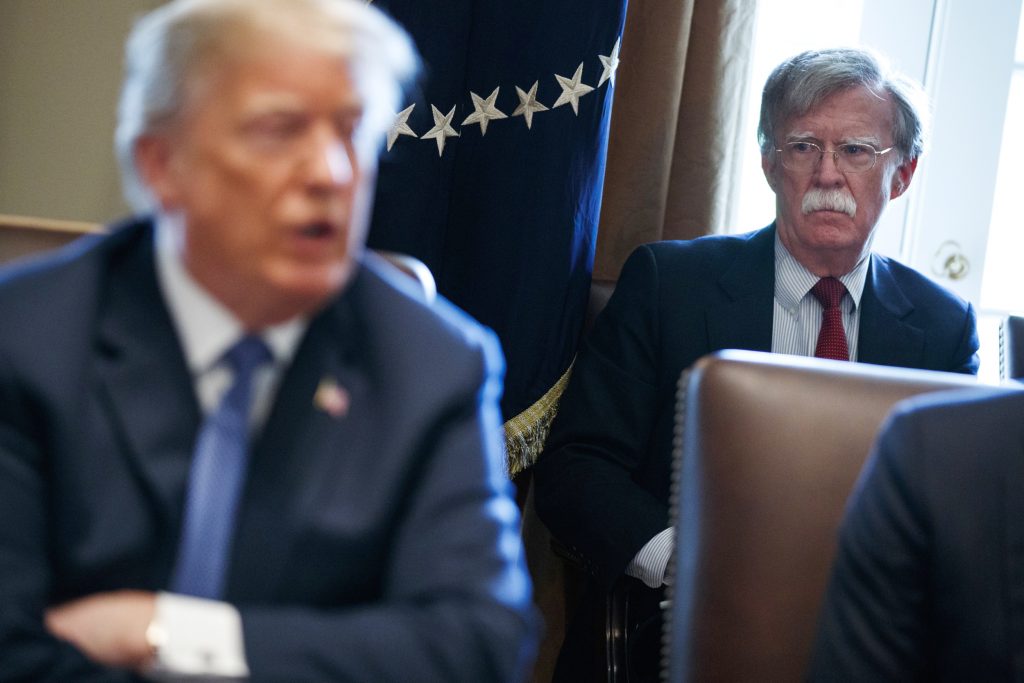 Mike Pompeo, still getting used to his new desk in Foggy Bottom, is all-too familiar with bashing Iran. As a member of the House of Representatives aligned with the Tea Party, Pompeo’s bread and butter was bashing Iran, going so far as to call for bombing the country while the JCPOA was being negotiated. Before becoming Trump’s first CIA Director, Pompeo felt the need to tweet that he looked forward to “rolling back” the agreement.

Of course, Trump has some less belligerent minds around him. Secretary of Defense James Mattis, no fan of Iran, has explicitly said the JCPOA “is something the president should consider staying in.” Marine Gen. Joseph Dunford, the Chairman of the Joint Chiefs of Staff, has said “Holding up agreements that we have signed…would have an impact on others’ willingness to sign agreements.” With Bolton and Pompeo onboard though, these reasonable voices are seemingly silenced.

Have you ever seen a sitting Head of State deliver a semi-coherent PowerPoint presentation? No? I offer you Prime Minister Benjamin Netanyahu’s “Iran Lied” talk. In what was billed as a revelation that would force the world to collectively come to the conclusion that the Iran Deal was in fact garbage, the world was offered a whole lot of hot air. Netanyahu’s presentation was full of information on Iran’s previous efforts to develop a nuclear weapon — the majority of which the international community was already aware of. He even confirmed what the U.S. knew in 2007: Iran suspended active work on their nuclear weapons program in 2003. What additional details he was able to provide only reinforced why the JCPOA is so important, namely because it prevents Iran from developing a nuclear weapon by allowing unprecedented access to Iran’s nuclear program to ensure nothing nefarious is afoot. 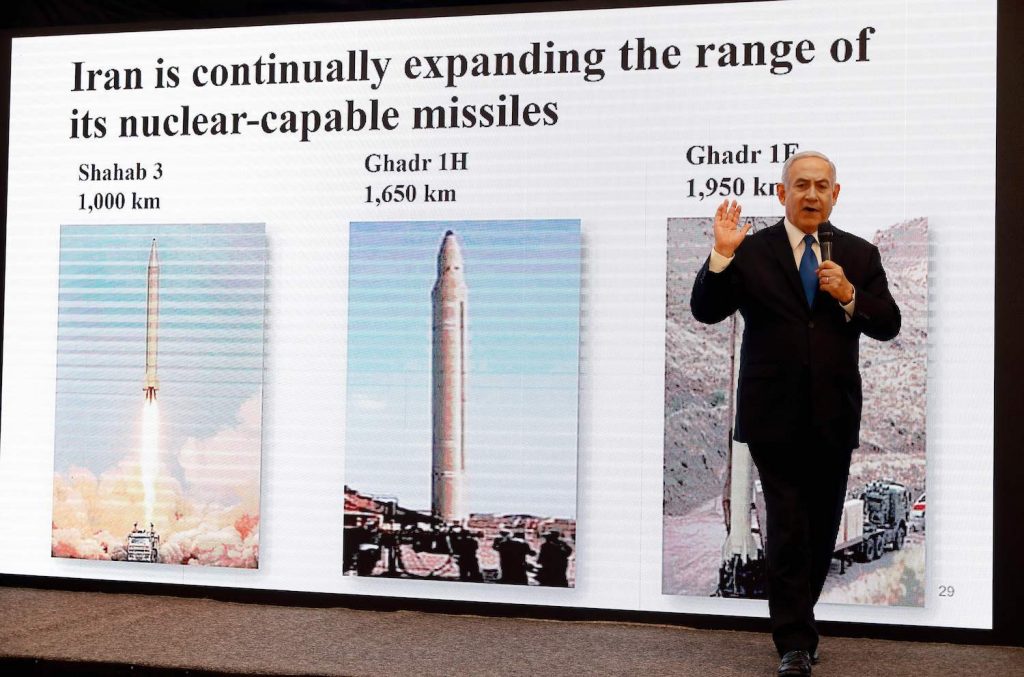 But this didn’t stop Trump from quickly asserting that the presentation proved he’s “been 100 percent right” in bashing the agreement. Mike Pompeo was quick to follow his boss’s lead, saying “The documents obtained by Israel from inside Iran show beyond any doubt that the Iranian regime was not telling the truth.” While the rest of the world was rightly nonplussed by Prime Minister Netanyahu’s stunt, Trump and his closest advisors viewed it as a moment of legitimization. That’s why nobody was surprised when Trump specifically cited the presentation during his announcement on May 8th.

The President’s political situation cannot be discounted either. With a growing series of scandals, an increasingly small circle of trusted confidants, and the looming spectre of losing one or both chambers of Congress in November, Trump is in a bad place politically. Scoring political points by finally making good on years of bluster bashing the Iran Deal plays to his ever-loyal base. Setting the table for a security crisis (of his own making) also gives him an opportunity to lean on calls for national unity in the face of potential armed conflict that his advisors have been advocating for for years.

While the circumstances that lead to Trump dumping the JCPOA are frustrating, the results of leaving the agreement may be outright catastrophic. While Trump’s team may have developed tactics for pulling out of the deal, they don’t seem to have anything resembling a long-term strategy to deal with the fallout of that action. The ripple effects of Trump’s decision have the potential to spread far beyond the Middle East and to last well into the future. Buckle up, because this analysis gets dark.

It doesn’t take a genius to realize that Iran will be most affected by the U.S. leaving the JCPOA. Within Iran itself, the death of the agreement could lead to serious social and political discord. The JCPOA is a central feature of President Hassan Rouhani’s moderate political platform. The deal was sold to the Iranian people as an avenue to opening up their nation to the West, which would provide economic relief to a strained economy. If the deal fully implodes, the agreement’s economic benefits cease. It should also be said that the more extreme elements of Iran’s political life rely heavily on the vilification of the United States. A failed deal would both discredit moderate voices and legitimize extreme ones. Without the JCPOA, the Iranian public is apt to spurn engagement with the U.S. in favor of antagonism.

Of course, without the agreement, there will be nothing holding back Iran from restarting its nuclear weapons program. No methods of verification; no rigorous inspection system; no incentives; nothing. This gives Iran a clear path to a nuclear weapon. As was mentioned earlier, this gives Team Trump exactly the excuse they want for going to war with Iran. To be blunt, we’ve seen this movie before. Trump and his War Cabinet are setting themselves up to throw the U.S. into a war justified by shady intelligence with questionable motives and no clear strategy for success. War between Iran and the U.S. won’t just cost Iranian and American lives; Israel, Saudi Arabia, Russia…the list of nations that could get drawn in to this quagmire is unsettling to fathom.

Despite (or, more accurately, in spite of) President Trump’s belligerence, the situation vis-a-vis nuclear weapons on the Korean peninsula are looking up as of of late. The leaders of North and South Korea, Kim Jong-un and Moon Jae-in recently held historic talks.The culmination of these diplomatic dealings are set to be a meeting between Trump and Kim on June 12. 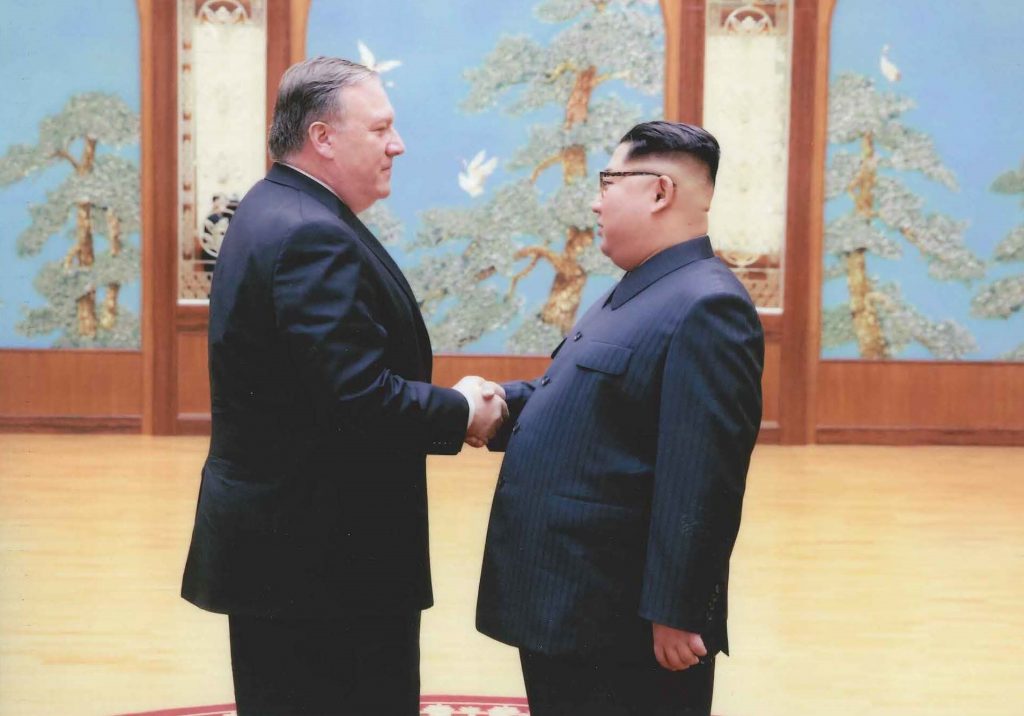 These developments are all undeniable signs of progress. The promise of a meeting between Trump and Kim is great, but violating the Iran Deal in the immediate lead-upcasts a massive pale over the proceedings. If the U.S. can’t be trusted to uphold commitments made alongside some of its closest allies, how can it be trusted to uphold commitments to North Korea? Add to this Trump’s pie-in-the-sky goal for the meeting (i.e. North Korea giving up its nuclear arsenal) coupled with his antagonistic style, and the negotiations could turn ugly quickly. The Korean peninsula may be looking like a more peaceful place lately, but Trump could very quickly turn that peace into renewed tensions (or far worse).

That threat of “worse” can’t be discounted. If Trump listens to Bolton’s ideas on North Korea the same way he listened to his ideas on Iran, the U.S. may be facing a war in East Asia in addition to one in the Middle East. While war with Iran would be a massive tragedy, the scope and character of a conflict with North Korea would be on an entirely different scale. The North’s arsenal of conventional and chemical weapons (and, oh yeah, NUCLEAR WEAPONS), and its proximity to South Korea and Japan, means the conflict would get very ugly, very fast. Expert estimates put the death toll in the first few HOURS in the tens of thousands, if not hundreds of thousands. By pulling out of the Iran Deal, Donald Trump made this horrific possibility more likely.

To be brief, Trump has profoundly damaged the way allies view the United States. By pulling out of the JCPOA, the President has signaled that the U.S. is not to be trusted in keeping its diplomatic promises. By justifying the action with spurious information, the U.S. has shown its foreign policy is guided not by facts but by politics. And by doing all of this to blow up a deal negotiated alongside some of its closest allies, the U.S. has outed itself as an irrational actor on the global stage. This is all very, very bad.

President Trump has increased the likelihood of war with multiple nations, ostracized the U.S. from its most important allies, and outright lied to the world. If pulling out of the Iran Deal isn’t a disaster, then what else is it?