Walking to Midnight with the Band Melt

When Veronica Stewart-Frommer began Melt with Eric Gabriel during their senior year of high school, she didn’t expect to book a national tour with sold out shows.

Five years later, the band concluded their first headline tour in December. As Melt continues to grow, the band remains determined to use their platform to advocate for the causes that are important to them, like voting accessibility, environmental sustainability, and combating nuclear weapons. Today, The Bulletin of the Atomic Scientist announced their newest reading of the infamous Doomsday Clock, and Melt responded by releasing a first look at their newest song Walk to Midnight!

Earlier, I sat down with the band to discuss their music, mission, and why the threat of nuclear war is one they’re passionate about!

For Stewart-Frommer, a songwriter and the lead singer of the band, activism, advocacy, and music all exist in the same plane. “That’s always where I do my best work, it’s like, when I’m on the ground, talking to people and connecting with people,” said Stewart-Frommer.

Activism has always existed in music, especially when it comes to advocating for social change, said Gabriel, the band’s keyboardist, singer and songwriter.

In the U.S., there are records of songs of activism and protests that are used to connect people around a centralized mission and can be traced back to the country’s founding, Vox reported. These songs provided insight into the experiences of marginalized communities on pressing issues like slavery, segregation, gun violence, and the Vietnam War.

“You’re trying to represent your emotions in some way or connect with people in some way. I think that inherently is kind of the same thing [as advocating for social justice].” he added. 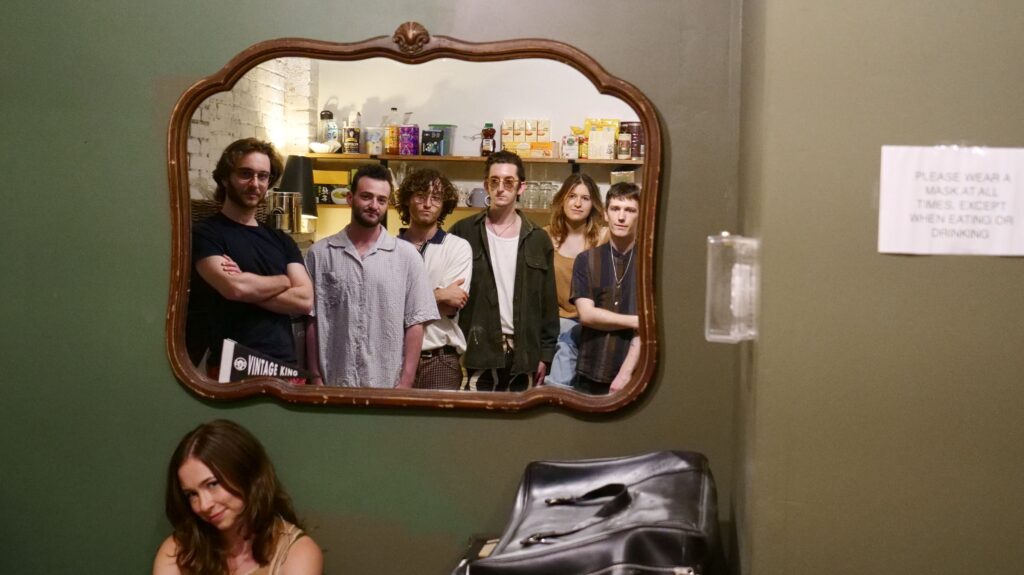 Highly empathic people can have a more pleasurable experience listening to music and can better understand another person’s perspective and feelings, according to a study from Greater Good magazine, which is published by the University of California’s Greater Good Science.

In their efforts, Melt partnered with HeadCount, a nonprofit that primarily registers voters at concerts and festivals. In their earlier gigs, the band also set up a donation box at one of their shows for the Yellowhammer Fund, a reproductive justice organization, and did a fundraiser for the Okra Project over the summer to donate to the organization’s goal of bringing home cooked meals to Black members of the transgender community. Additionally, Melt has partnered with Beyond the Bomb to give out thousands of “Make love, not war,”  condoms on their last tour.

“We all care about what’s going on in our communities,” Stewart-Frommer said, “and it’s always been really nice–no matter how small the platform has been in the past or continues to be– it’s always been a really great way to connect with our fans and also make our music feel like something that has something to say.”

“It’s ultimately like a silly thing that just makes us laugh, but I think in some ways, there is a nugget of truth to the whole idea of Melt nation. Because we are getting to create this community that has norms and a set moral code.”

The band has a bit at soundchecks and rehearsals that they call “Melt nation,” where they solo and freestyle during a song and discuss the benefits of a world they envision, which has systems like free parental leave and free child care.

“It’s ultimately like a silly thing that just makes us laugh, but I think in some ways, there is a nugget of truth to the whole idea of Melt nation. Because we are getting to create this community that has norms and a set moral code.” Stewart-Frommer said.

As Melt continues to grow and strengthen their fanbase, they’re determined to remain involved in their communities.

“I think as we grow, we’ll only get more vocal about issues we care about,” said Marlo Shank, Melt’s guitarist.

While the Doomsday Clock ticks closer to midnight, Stewart-Frommer and the rest of Melt will keep fighting to turn it back using music, Melt nation, and even TikTok.