Victim Blaming: From the Courtroom to the War Room

Disclaimer: This blog post discusses topics of sexual exploitation and rape. If you have experienced sexual violence and are in need of support, please call the 24/7 RAINN Sexual Assault Hotline at 1-800-656-HOPE (4673). 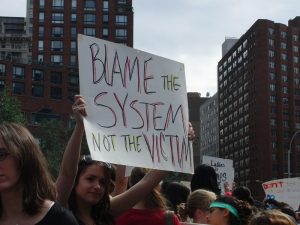 Victim blaming is a behavior that holds the victim accountable for a crime rather than the perpetrator. It
flourishes in a viciously patriarchal environment where sexism and rape are cultural pillars. Victim blaming often occurs after the sexual exploitation of women. In fact, the trope is so heavily ingrained in American culture that it prevails in court. A judge in Montana sentenced a convicted rapist to just one month in prison because the 14-year-old child looked older than her age. A New Jersey judge denied a victim’s request for a restraining order against her rapist because she could have closed her legs. Most recently, the Minnesota Supreme Court overturned a felony rape conviction because the victim chose to drink before he assaulted her.

The consequences of victim blaming are drastic. First, society weaponizes victim blaming to publicly denounce the victim as an outcast. This mindset subsequently offers society a false sense of security. Having framed the individual as complicit in their own victimization, the rest of us feel safer because we are not “like them.” Victim blaming ultimately reinforces the abuser’s perspective. The victim must have done something to provoke their abuser and, therefore, deserved their abuse and exploitation.

In the courtroom, victim blaming emboldens criminals. In the war room, it justifies a nuclear attack.

75 years ago, the U.S. leveled Japanese cities Nagasaki and Hiroshima with two atomic bombs. In a matter of seconds, the pure heat and energy vaporized those closest to the hypocenter. In the following months, the death toll was estimated at 150,000 in Hiroshima and 75,000 in Nagasaki. The chaotic aftermath made it difficult to accurately record, so these statistics excluded innumerous victims —  including those swept to sea while soothing their burns.

The bombs were detonated in seconds, but the trauma sustained was generational. Five to six years later, many survivors succumbed to unusually high rates of leukemia, thyroid, breast and other cancers directly related to radiation. Pregnant mothers exposed to the blasts were 7 times more likely to experience a stillbirth or miscarriage, and children of survivors are now vulnerable to hereditary transmission of radiation. Survivors are also susceptible to psychological instability, including Post-Traumatic Stress Disorder (PTSD) and depression. It remains unclear how long the effects of the blasts will last. Considering the consequences that linger even today, the U.S. is responsible for devastation spanning decades.

So, how did the U.S. rationalize this destruction? Victim blaming. 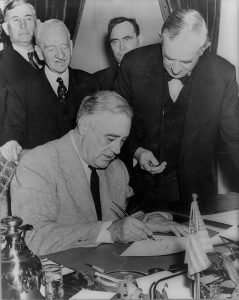 Throughout WWII, American leaders manipulated xenophobic tensions for political gains. In 1942, President Roosevelt issued a shocking executive order to isolate any citizen deemed a threat in internment camps. Of the 120,000 unconstitutionally detained, approximately two-thirds were of Japanese descent. In 1945, the presidency changed but the dehumanization of Japanese people continued. President Truman publicly referred to Japanese people as, “savages, merciless and fanatics.” From such derogatory language, marginalization naturally ensued. Their appearance, their ancestry, their identity challenged the dominant narrative — they were made outcasts.

Victim blaming simultaneously neutralized the guilt that should have accompanied the bombings. Instead, U.S. leaders sought every opportunity to distance themselves from their victims. Immediately after Japan’s surrender, General MacArthur issued an occupation press code, restricting reports on anything related to the bombings, radiation, and limiting foreign journalists. The ban wasn’t lifted until 1952. President Truman also rejected all responsibility for the atrocities committed in Japan. Despite knowing the bombs killed 100,000 noncombatants, including tens of thousands captured Korean soldiers, he praised his nation’s superiority in its conduct of the war. In doing so, Truman reiterated a false sense of exceptionality. At least, we were not “like them.”

We are living proof of the ultimate consequence. From a young age, the American education system fed us the lopsided narrative that nuclear warfare was the only choice. The Japanese were “beasts,” not humans like us. The Japanese deserved it, and the U.S. was the hero. The militarization of victim blaming in the Atomic Age pressures us to accept a black-and-white picture that reinforces the aggressor’s actions. But history is not binary. We cannot let our youth believe the most extreme decision is the rational one. We can no longer allow our government to fault other nations for our own crimes against them.

To this day, the U.S. remains the only country to have used nuclear weapons aggressively. Still, we continue to pour billions of dollars into our nuclear arsenal under the guise of security. The threat of nuclear warfare will never cease until we commit to denuclearization. Tell your representatives to support the No First Use Act to make it the policy of the U.S. to never use nuclear weapons first.

In memory of those lost and for the sake of our future, we must move towards a nuclear-free world together.