This past Tuesday, September 25, United States President Donald Trump addressed the United Nations General Assembly. While he stayed away from inflammatory rhetoric against North Korea and Kim Jong Un – unlike last year’s UNGA speech where he referred to Kim as “little rocket man” – he did use some subversive language when talking about Iran.

Here are four responses to the problematic nature of Trump’s focus on Iran:

1. War-mongering rhetoric against Iran and multilateral institutions increases the possibility of war

In his speech, Trump focused on Iran’s corrupt leadership and nuclear program as well as bashing the “ideology of globalism.” The United States needs a president who will put diplomacy and cooperation first and truly work for nuclear nonproliferation. Trump’s bellicose focus on Iran is not only problematic and unhelpful, it is dangerous — a tee-up for escalating tensions between the United States and Iran, which increases the possibility of war.

2. The Iran Nuclear Deal is an effective tool for preventing Iran from developing a nuclear weapon

Trump’s continued railing against the Joint Comprehensive Plan of Action (JCPOA) — known as the Iran Nuclear Deal — is not only misleading, but in many aspects outright false. The Iran Nuclear Deal is working. Iran is keeping up with its part of the deal, complying with limits on uranium enrichment, centrifuges, and plutonium enrichment, as well as allowing IAEA inspectors full access to its nuclear sites and some other facilities. The deal featured detailed monitoring and verification measures that have never been seen before, including permanent IAEA inspections. The deal blocks every pathway Iran may have to acquiring nuclear weapons.

Trump said in the speech that snapping back the sanctions on Iran would put pressure on the Iranians and force them back to the negotiating table. More sanctions is not a credible alternative to staying in the Iran Nuclear Deal. They simply hurt the Iranian people, escalate tensions, and hamper nuclear nonproliferation efforts. 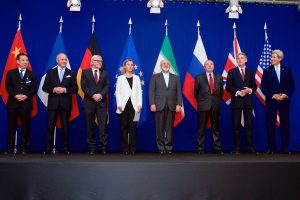 Officials from the P5+1 countries, European Union, and Iran while announcing the framework for the Iran Nuclear Deal.

From the beginning of his Presidential run, Trump campaigned against the Iran Nuclear Deal. Months after withdrawing from the deal earlier this year, Trump continued his crusade against the deal in his UNGA speech. He stated, “We cannot allow the world’s leading sponsor of terrorism to possess the planet’s most dangerous weapons.”

Trump played off this focus on Iran as part of an effort to stem the spread of weapons of mass destruction. However, Trump’s decision to pull the U.S. out of the Iran Nuclear Deal and constant bashing of the deal — which, again, is working to keep Iran from developing a nuclear weapon — only undermines nuclear nonproliferation efforts.

4. Trump is so concerned about Iran – what about the United States’ nuclear weapons?

The United States needs a president who will put diplomacy and cooperation first and truly work for nuclear nonproliferation.