Trump’s Access to Social Media May be Limited, but He Still Has the Nuclear Codes 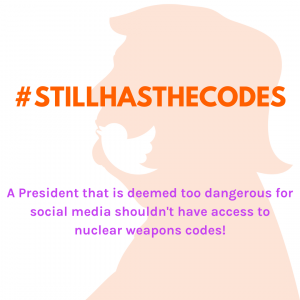 It is a terrifying reality that the man deemed “too dangerous” for social media currently has access to our nuclear codes.

January 6th, 2020 seemed like a scene taken straight out of a dystopian film as Trump’s treasonous followers violently took over the U.S. Capitol building. Trump instigated this attack and his followers carried it out. The rioters scaled the walls, planted pipe bombs and Molotov cocktails, and looted what they could find. The attempted governmental coup might have failed, but Trump’s followers’ disloyalty to the United States and its democratic process is clear. It was an attack fueled by a President that refuses to accept the will of his people. If the events of Wednesday taught us anything, it was that Trump would do anything to remain in power — even if that meant resorting to violence against his own country. It’s a jarring reality, especially when you realize that Trump, like every sitting United States President, has sole authority over the U.S. nuclear arsenal.

Following violent riots fueled by Trump’s inability to lead, many have begun to question his fitness for office (as if the last few years weren’t proof enough!). As President until January 20th, Trump currently still has all Presidential liberties, one of which is sole authority over the United States’ nuclear arsenal. This means that Trump has total control over the U.S.’s stockpile of 5,800 nuclear weapons, and he can launch them at a moment’s notice without any interference.

Nuclear weapons have the capacity to end life as we know it. One nuclear weapon can destroy an entire city, leveling it to the ground and taking hundreds of thousands of lives. Nuclear weapons also have long-term catastrophic effects that compromise the climate and leave lasting health effects that will affect countless generations well into the future. To launch a nuclear weapon is to accept humanity’s mutually assured destruction. Yet, President Trump has his finger hovering over the trigger, despite his current act of insurrection.

Following the traitorous events in Washington, DC, social media platforms such as Facebook, Instagram, and Twitter took immediate action to ban Trump from their platforms. On the day of the riot, Twitter locked Donald Trump out of his own Twitter account and later permanently removed him from the platform, claiming that “after close review of recent Tweets from the @realDonaldTrump account and the context around them we have permanently suspended the account due to the risk of further incitement of violence.” Facebook also banned Trump on all of its platforms until the end of his presidential term at least. Mark Zuckerberg, Facebook’s chief executive, wrote, “We believe the risks of allowing the president to continue to use our service during this period are simply too great.” 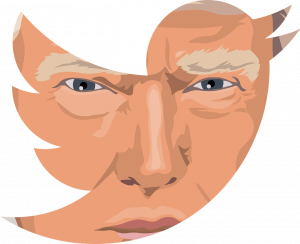 Donald Trump is a man who is too unhinged to have control over his very own social media accounts. The second House impeachment proceedings against him agreed that Trump used social media to incite and urge on violent acts that left Congressional men and women sheltering in place, hiding in fear under their desks, and dreading the worst as armed mobs looted Congress. When Trump released his violent horde on the U.S. Capitol, he ended a more than 220 year-old tradition of a peaceful transfer of power from one President to the next. Donald Trump at this moment demonstrated that he would do anything to stay in power. This is the man that has the United States nuclear codes.

Fears about Trump’s fitness to serve in office have escalated over these dangerous final days as the office transfers to Joe Biden. Concerns over the President’s mental state alongside the violent riots highlight the instability of how nuclear weapons are handled by top officials in the U.S. More importantly, these recent events have highlighted the urgency of putting constraints around the sole authority the President has over nuclear weapons. The United States has one of the largest nuclear arsenals in the world, and the man currently presiding over them is clearly unfit to do so.

There are actions that can be taken to prevent any president from holding the sole authority to launch our nuclear weapons and towards a world free of their harmful effects. Take action today and sign the No First Use petition, showing your representatives that you believe that no one person should possess the vast power to end all life on Earth and that the U.S. should not have free reign to start a nuclear war. Together, we can work to end any possibility of Trump — or any president after him — having the power to hold the world hostage.