Trump Puts Us at Two Minutes to Midnight

UPDATE: The Bulletin of Atomic Scientists will be releasing the 2019 Doomsday Clock on January 24th. Please visit their site at www.thebulletin.org.

The Doomsday Clock is at two minutes to midnight.

That means the world is closer to a nuclear apocalypse than it has been since the height of the Cold War. The last time the Doomsday Clock was this close to midnight, the U.S. and Soviet Union had just tested their first hydrogen bombs. That we’re as close to the end of civilization now as we were then is a sobering indictment of the present. 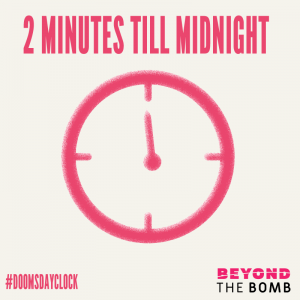 The Bulletin of Atomic Scientists (the group that manages the Doomsday Clock) named several factors that moved the Clock closer to midnight, including the threat of climate change. The Bulletin also keeps an eye on the spread of misinformation on a mass scale through social media, and the increased risk of cyber-based conflicts. However, one factor jumped out as the most threatening: nuclear-armed world leaders like Donald Trump.

Trump and those like him are edging the world closer and closer to nuclear war. On the Korean peninsula, macho bluster from Trump and Kim Jong-un threaten the gravest of consequences. Threats to arms control agreements from U.S. and Russian leaders jeopardize decades of hard-fought progress to reduce the likelihood of nuclear war. The Trump administration has laid out a vision to make nuclear war easier to wage.

In all of these cases (and unfortunately many more), a small cabal of leaders across the globe are making decisions that have implications for the entire world.

As dire as the situation is, it’s critical to remember that it’s within our power to turn back the clock and save the world. Beyond the Bomb is founded upon that hope, and we won’t meet the biggest challenge of our time sitting on our hands.

That’s why we’re going into communities all over the U.S. and training activists how to fight the nuclear system that threatens all we hold dear. Most recently, Beyond the Bomb’s John Qua visited Northfield, Minnesota to meet with the students and faculty of Carleton College.

One of the primary goals of expert organizers like John is to give local leaders the tools and training that they need to educate their communities on how they can take action. By foregrounding them with the history of how activists have successfully led nuclear disarmament campaigns in the past and tying them to modern-day solutions student and faculty activists are able to serve as(?) grassroots leaders in Beyond the Bomb efforts, such as our local resolutions campaign.

We may be getting dangerously close to the point of no return, but we must not forget how much we can do to prevent that from happening. If you can’t attend a Beyond the Bomb training, you can write a letter to the editor calling for your elected officials to oppose the nuclear system, kickoff your own local resolution campaign, or sign Beyond the Bomb’s open letter to Congress. The stakes may be high, but together, we can prevail.