Nuclear False Alarm Shows Why State Politics Are Not Enough

For 38 minutes on January 13, residents of Hawaii were forced to confront the possibility that they might become the first casualties of a nuclear attack on the United States. Though it turned out to be a result of human error, the incident has highlighted the many ways the United States is unprepared for the civilian consequences of a nuclear disaster. The response from the President, the only person with the authority to order a U.S. nuclear strike, came more than a day later: he dismissed the false alarm as “a state thing,” praising the state of Hawaii for taking “total responsibility.” 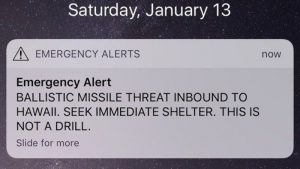 2017 was a year that showed the power of state government, and especially state government working in cooperation with active and informed citizens. Across a range of vital causes, political achievements at the state level have been bright spots on an otherwise bleak news landscape. This was especially true in the realm of climate change activism: after the President announced his decision to withdraw from the Paris Climate Accord, an assortment of governors, mayors, business leaders, and other groups declared their intention to honor the agreement despite the lack of support at the federal level. Recourse to state politics has become a popular avenue for progressive organizing in a period where the prospects for change at the national level seem dimmer than ever.

Nuclear politics have been no exception, and Congressional support for checks on the president’s power to issue an order for a nuclear attack is growing. As early as last January, a bill introduced by Senator Ed Markey and Representative Ted Lieu sought to limit Presidential authority to order a nuclear strike. In November, a Senate hearing was called by Tennessee Republican Senator Bob Corker on the possibility of introducing formal checks on Presidential nuclear authority. One of the many proposed amendments to this policy is the Betts/Waxman solution, which would require both the Secretary of Defense and the Attorney General to sign off on any presidential launch order. This would provide for some level of legal oversight of the decision, and verify that the order was in fact made by the President, lowering the possibility of mistaken strikes due to cyberattacks.

The administration’s dismissive response seems to praise Hawaii for owning up to its mistake, as if this amounted to a tacit acceptance of the administration’s abdication of its responsibility as steward of the American nuclear arsenal. It also highlights a drastic and potentially devastating asymmetry in the distribution of nuclear authority in the United States: while the President can order a first strike, state and local governments are largely in charge of dealing with the fallout, from that decision. Across the country, states are revisiting the nuclear chapter of their Emergency Management Plans, many of which have not been revised in decades in an attempt to prepare residents for a world where leaders openly threaten nuclear strikes. Many of these plans are still based on attack scenarios that were designed with the Soviet nuclear arsenal in mind.

In an era of nuclear uncertainty, it is state governments that will bear the burden of managing the aftermath of a hypothetical nuclear attack. This means that states can and should play a major role in the conversation around limiting Presidential nuclear strike authority and reducing the United States’ nuclear arsenal. States across the country have already begun taking action to demand the President be stripped of his or her unchecked ability to launch a nuclear weapon. California, Maryland, Massachusetts, Iowa, and Vermont have introduced resolutions in support of “checks and balances” on that unilateral power in the form of bills like Representative Smith’s No First Use bill or the Markey-Lieu bill that, like going to war, would move the decision to Congress. States can act as catalysts for change at the federal level by giving voice to growing concerns about nuclear instability and acknowledging the ways in which an aggressive nuclear stance takes resources away from other essential issues, states can act as catalysts for change at the federal level.