The world has responded to the recent developments on North Korea with a mix of optimism and skepticism. The April 27 meeting of Kim Jong-un and and Moon Jae-in at the border post at Panmunjom produced powerful images of the two men shaking hands and smiling. President Trump’s summit meeting with Kim in Singapore on June 12 was the first ever between a sitting U.S. president and a North Korean leader, and the resulting declaration affirmed a commitment to “complete denuclearization.” 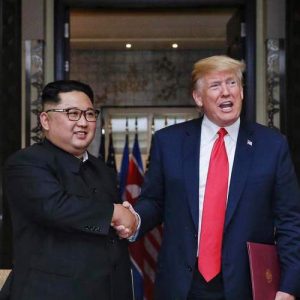 Some analysts fear that optimism around these developments is founded on persistent misunderstandings and misrepresentations of the North’s, and the United States’s, ultimate goals; others have noted that the language of the resolution released by the U.S. and North Korea calling for “complete denuclearization” doesn’t fully address the administration’s stated goals of “complete, verifiable, and irreversible denuclearization,” suggesting that North Korean and American goals may still be irreconcilable. Still, others point out that the fact that both meetings took place at all is a powerful indication that real change is afoot.

After nearly seven decades with no formal end to the Korean War, it’s easy to wonder: why now? One particularly pernicious narrative has emerged: that Trump’s extravagant threats to North Korea over the past year somehow forced this promising diplomatic development. But rewriting the recent history of U.S.–DPRK relations not only licenses the President’s erratic behavior as a “strategy” (one with potentially disastrous consequences), it also obscures the real achievements of those whose hard work made these meetings possible.

South Korea is so often put forward as an economic success story that it’s difficult to see how the Korean Peninsula might have anything in common with other so-called frozen conflicts around the world. But the work of South Korean writers and activists often reflects a sense of profound damage and powerlessness in the wake of the war and the political and military buildups it precipitated. Don Mee Choi, a Korean-American poet and translator of the groundbreaking South Korean poet Kim Hyesoon, describes a pervasive sense of rupture: “At school, I was taught that Korea looked like a side view of a rabbit. Its severed waist stitched up with barbed wire, its scorched belly studded with a million landmines, its adorable ears branded as an axis-of-evil.”

The U.S. and South Korea signed the Mutual Defense Treaty in 1953, creating an alliance that shaped contemporary U.S. political and military strategy in Asia. Today, nearly 30,000 U.S. troops are stationed in South Korea. But the deployment of THAAD missile defense systems on South Korea’s territory and other aspects of the US military presence have often met with resistance. The threat from the North, and the imperatives of U.S. security, have often exerted a decisive influence on domestic politics. In the words of Hyejin Shim, a Korean-American activist, “War and division cost us too much, normalized all the worst impulses of humanity, and for South Koreans, created a world in which silence, political repression, exploitation and violence were the costs of ‘safety.'”

Peace activists on and off the Korean Peninsula have worked tirelessly to end hostilities with the North and heal wounds from the war. The Panmunjom Declaration, and the meeting that produced it, is celebrated by them as the result of concerted, large-scale efforts to elect Moon, who included peace with the North as a major platform of his election campaign. The meeting comes after the early April sentencing of former President Park Geun-hye to 24 years in prison on charges including bribery—another sign for South Koreans that real change is afoot.

Christine Ahn, an activist and founder of the organization Women Cross DMZ, has spent her career working toward peace on the Korean Peninsula. Ahn’s work focuses on the human costs of the war, working to unite families that have been separated for decades on either side of the DMZ. Members of Women Cross DMZ from the U.S. & Korea are celebrating the fact that the Declaration included a resolution to “proceed with reunion programs for the separated families on the occasion of the National Liberation Day of August 15 this year.”

In an interview with In These Times, Ahn was happy and hopeful about the results of the summit. She offered perhaps the best interpretation of the tendency to credit Trump for progress: “Moon Jae-in telling Trump that he should get the Nobel peace prize [sic] and the Koreans will have peace says everything about how gracious of a leader he is.” But Moon’s political savvy should not be interpreted by observers outside South Korea as passivity or an admission of his country’s irrelevance, and the evolving situation on the Korean Peninsula is not a testament to the wisdom of brinksmanship as a diplomatic tactic. It should be cautiously celebrated, as a small step forward toward a peaceful, stable future without the constant threat of nuclear cataclysm.

Moon Jae-in telling Trump that he should get the Nobel peace prize [sic] and the Koreans will have peace says everything about how gracious of a leader he is.