There’s No Such Thing As “Smaller” Nuclear Weapons

Beyond the Bomb has made it explicitly clear that the U.S. doesn’t need more (or any) nuclear weapons.

However, President Trump whined, “But, I want a new one!!”

Beyond the Bomb, most of the U.S., and many other world leaders said, “Well, what about the other 6,550 weapons you have?”

Trump sniffled, “But we need more of these smaller ones to fight Russia!”

“Well you and your presidential predecessors have so far refrained from using any of the ones you already have. So surely on some level you must understand that no conflict calls for unleashing the amount of destruction and chaos of nuclear weapons!”

“But this one unleashes just a little chaos!”

And before we could answer, Trump ran away, throwing the torn-up INF Treaty at us, and began to build his new low-yield nuclear weapon. 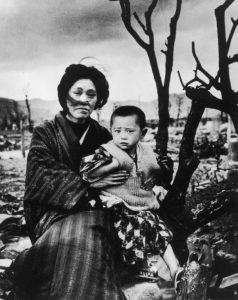 OK, the conversation didn’t quite go like that, but it seems that President Trump’s reasoning to build another so-called “low-yield” nuclear weapon was pretty close to that. The U.S. does, in fact, already have 6,550 nuclear weapons. And more specifically, we already have a lot of low-yield ones. Around 1,000 of them. The weapon Trump has begun to build, according to Representative Ted Lieu, is “indistinguishable” from nuclear submarines already within the nuclear arsenal. Not to mention calling them low-yield is a bit of joke as the bombs that devastated Hiroshima and Nagasaki were also considered “low-yield.”

The administration claims that unless the U.S. has more of these smaller nuclear weapons, Russia may bomb us. They assume Russia will bet theU.S. wouldn’t retaliate with any of the more powerful bombs in its arsenal, so unless the U.S. has weapons of equal measure, Russia won’t be deterred from attacking us. This logic is weak and greedy. If a city is bombed with a weapon of any size, it will be destroyed and cannot be undone. We believe no cities should be bombed, and no more low-yield nuclear weapons should be built.

And finally, the danger of having these weapons at the disposal of our impetuous Commander-in-Chief  (or any president) lies in the fact that they might mistakenly believe that because they are “low-yield” their impact will be negligible and merely tactical. A leader might behave as though because they are “low-yield,” they can be used lightly. However, any nuclear weapon will do damage and lead to escalation; there is no such thing as a “little chaos.”

The silver lining is that legislation was recently introduced in both the House and the Senate addressing these issues. There is the No First Use Act that prohibits the United States from engaging in a nuclear strike unless first provoked with an incoming nuclear strike. There is the Restricting First Use Act that calls for the end of presidential sole authority to launch a nuclear first strike. And the Hold the LYNE (Low-Yield Nuclear Explosive) Act that will prohibit the further development of low-yield nuclear weapons.

So here’s what you can do: We need you to write your Representatives and ask them to support the No First Use Act, the Hold the LYNE Act, and the Restricting First Use Act. It’s time for Congress to show that they stand against these unnecessary weapons and will fight to stop them. Despite the frequently puerile logic of the president in regards to nuclear weapons, there is a lot of hope for what you and what we can do to make this world a little better and a little safer.