The Legend of Korra: A Lesson on Diplomacy

“Nickelodeon at Universal Studios” by ross_hawkes is licensed under CC BY 2.0

Alright, I’m ready to hear from the Korra haters… If any of you grew up watching Nickelodeon ™  in the early 2000s, you know of  the hit animated series Avatar: The Last Airbender (ATLA) and its sequel The Legend of Korra (TLOK). For those who were unfortunately deprived of this crucial part of childhood, in the ATLA universe, the world has been at war for 100 years until the Avatar, Aang, ends the war, bringing in an era of peace. TLOK picks up after this 70 years later with protagonist Korra as the hot-headed Avatar. Korra is very heavily criticized by fans for her sometimes headstrong personality, one which may be all too familiar for those of us who keep up with US military actions abroad.

Throughout the first season alone, TLOK delineates a need for decreased militarization, heavily reflecting the world’s post-WWII society and emergence of nuclear weapons technology. Despite Korra (like us) technically living in a “post-war” world, both her and our communities see a heavy reliance on aggression, technology, and state-sanctioned violence. Unlike the US government, however, Korra learns about the importance of diplomacy and introspection in the fight for peace.

Season one spoilers ahead for those who haven’t watched! 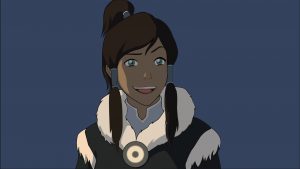 “The Legend of Korra Illustration” by Rashi Kalra is licensed under CC BY-SA 2.0

The main antagonist in season one of Legend of Korra is Amon, the leader of the anti-bending Equalist movement. Amon and the Equalists have the goal of bringing equality for non-benders against what they claim to be a ‘tyrannical government’ ruled by benders — those with the ability to manipulate an element (water, fire, earth, and air). Despite having a seemingly good cause, his methods of fear mongering, violence, and inciting hatred are not. Ironically, Amon himself is a bender and claims that he was gifted the mysterious ability to “cleanse [benders] of their impurity” from the spirits.

The secondary antagonist is Tarrlok, the waterbending representative on the city council who forms an Equalist task force in joint effort with the Republic City Police to bring Amon to justice. Pragmatism abounds though, and their twisted tactics of aggression, manipulation, criminalizing non-benders, and even using the forbidden technique of bloodbending, don’t give them a moral high ground. With distrust in Republic City’s authoritative leaders, Korra attempts to solve the conflict herself through violent vigilante justice. In facing Amon head-on, Korra loses her bending abilities to him and is forced to reckon with what it means to be the Avatar — the world’s peacekeeper. Through introspection, she puts her spiritual Avatar training to practice and learns the importance of diplomacy to cultivate a peaceful, balanced world.

Both our present and TLOK worlds exist about 70 years after a massive worldwide war, and since then, the worlds have been labeled as times of peace — but that impression is only an illusion once we take a closer look. Korra, like the US government, relies on aggressive means of getting what they want. This is reflected in the US’s heavy militarization and subjugation supported by police and military force, like Biden’s heavily inflated $753,000,000,000 defense budget plan. The US is so concerned with building shiny, new weapons to show other countries who’s boss, when it’s literally been suffering in a pandemic for over a year. Not to mention, its citizens have gotten very little support from the US government…. If we’re concerned about peace and safety for our people, where is the massive budget for affordable housing, healthcare, education, wages, or social programs that ACTUALLY help us?

Korra’s concurrent misuse and misunderstanding of her role as the Avatar mirrors the US’s misuse of nuclear weapons and misunderstanding of peace. Just look at the US’s attitude towards Asia, the US also has over 130,000 troops in the Indo-Pacific and the Senate recently declared a Cold War on China. It is not very effective for Biden to include in his anti-Asian violence plan to increase violence against Asia, and really, it only gives vindication for further violence against Asian Americans and Pacific Islanders (AAPI).

What we can take away from Korra is the importance of diplomacy and the need for decreased militarization, rather than increased violence. Diplomacy and negotiations have often been mislabeled as signs of weakness. This begs the question: is Korra heavily criticized for her violent methods (even though male main characters in other cartoons behave similarly) or because she starts to use more diplomatic — “feminine” — solutions? The former shows that we understand our inadequate methods and the latter shows a clear gender bias present in our conflict resolution strategies, whether on an individual or state level.

Korra’s learning doesn’t end with the downfall of Amon in season one and she’s definitely not the perfect diplomat, but she continues to learn and grow. The same can be said about us and the US — we aren’t doomed and our growth doesn’t need to end here. One action we all can push for from our representatives is the redistribution of funding from the overly inflated military budget into social and welfare programs that directly support our people instead of their mass destruction. Instead of existential threats, we need unity and peace.

“The Legend of Korra Illustration” by Rashi Kalra is licensed under CC BY-SA 2.0

“Nickelodeon at Universal Studios” by ross_hawkes is licensed under CC BY 2.0