The Iron Triangle in Defense Contracting and Nuclear Weapons

The “Iron Triangle” is the term used to describe the close relationship in United States politics between government bureaucrats, congressional committees, and various interest groups when determining public policy. The term became popular in 1981 after being introduced in Gordon Adams’ The Politics of Defense Contracting.

The iron triangle is a closed relationship that makes far-reaching policy decisions meant to benefit those directly involved. Sounds democratic, huh? To break it down, Congress appropriates money to departments like the Department of Defense (DoD.) In turn, the DoD distributes contracts to companies and regulates them. These companies and interest groups return the favor by providing funding and support to the same congressional and bureaucratic leaders doling out the money and contracts. Everyone wins except for one group: us. 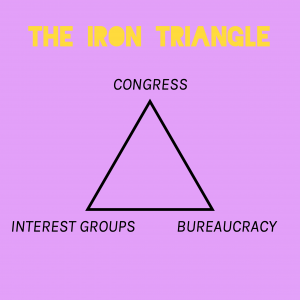 The iron triangle leaves little room for public commentary on how the United States’ almost $700 billion defense budget gets spent. For example, according to the Union of Concerned Scientists, the Pentagon provided documents to Congress detailing a $48.5 million plan to build so-called “low-yield” nuclear warheads over the next five years. The Trump administration claims that the production of “low-yield” nuclear weapons would increase America’s deterrent power by providing more flexible means of countering an enemy attack. However, development of these “low-yield” weapons is destabilizing and unnecessary.

The U.S. already has “low-yield” nuclear weapons, such as the B61-12, and  plans to modernize them beginning next year at a total cost of $8-10 billion. The underlying belief behind the production of more “low-yield” nukes is that Russia may utilize a “low-yield” nuclear weapon, anticipating the U.S. would not respond because we only have higher-yield weapons and would not risk a full-scale nuclear exchange. However, even if Russia did use such a strategy, they would be unable to differentiate among the “low-yield” W76-2, the W76-1 (100 kilotons), and the W88 (450 kilotons) until detonation, giving us no reason to assume it won’t respond with the most devastating nuke available. Former Defense Secretary James Mattis said “I don’t think there is any such thing as a tactical nuclear weapon. Any nuclear weapon used at any time is a strategic game-changer.”

Why do President Trump and Congress continue to funnel money into these unnecessary Department of Defense projects? Because the companies benefiting from those contracts with the DoD surround legislators with lobbyists and channel money into the campaigns of supportive candidates through their PACs. For example, Lockheed Martin, the nation’s top defense contractor has spent nearly $7 million on lobbying so far in 2019.

National security elites are not only inundated with lobbyists and PAC money but are themselves often involved in special interest groups for government contractors. Movement back and forth between the bureaucracy, Congress, and companies under contract with the DoD is known as the “revolving door” and is common practice. This revolving door of Pentagon officials becoming lobbyists for companies profiting from government contracts and vice versa is well documented, from President Obama’s Deputy Secretary of Defense, William Lynn, who previously worked as a Raytheon lobbyist, to President Trump’s former Secretary of Defense, James Mattis, who was a board member for General Dynamics.

“I don’t think there is any such thing as a tactical nuclear weapon. Any nuclear weapon used at any time is a strategic game-changer.” – James Mattis, former U.S. Defense Secretary

In the nuclear realm specifically, former Arizona senator Jon Kyl served on the Senate Armed Services Committee and the Homeland Security and Governmental Affairs Committee for four months despite having previous ties to Raytheon and Northrop Grumman as a lobbyist. He also served as a paid board member for National Technology & Engineering Solutions Sandia, which operates Sandia National Laboratories, a nuclear research and development lab. House of Representatives Western Caucus members pressed Trump in July to reconsider an Obama-era twenty-year ban on uranium mining around the Grand Canyon National Park. It turns out that the Western Caucus Chairman, Rep. Paul Gosar (AZ-04), received over $25,000 in funding from the mining industry in 2018 according to opensecrets.org. 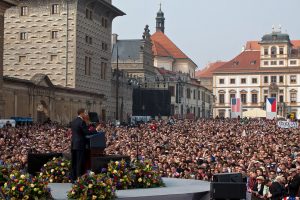 President Barack Obama delivers his speech stating a commitment to seek the peace and security of a world without nuclear weapons in Prague.

Even after President Obama’s famous speech in Prague in 2009 declaring the U.S.’ commitment to a world without any nuclear weapons, the iron triangle proved too powerful. The Obama administration ultimately promised an additional $14 billion over a decade for modernization of the U.S. nuclear arsenal. Costs for the modernization effort have only ballooned from a predicted $215 billion between 2014 and 2023 to $494 billion between 2019 and 2028 according to Congressional Budget Office reports.

So what can we do about the iron triangle? We must write and call to demand better from our representatives and our President. The first step is electing people to Congress and to the presidency who will resist the status quo and redirect our national security focus from a “might is right” mentality to diplomatic engagement. As seen by the results of the Obama administration’s efforts, however, simply getting them to office will not be enough. We need to continue to show our support for a more humanitarian defense policy even after the elections. We must also demand greater accountability from both elected and appointed officials in terms of their work history and any conflicts of interest that may arise.