You see the symbol everywhere. You may see it at anti-war rallies, evoking memories of 1960s hippies, or at other rallies for social justice causes. You’ll also most likely see it on clothing and jewelry, not necessarily representing any one message.

But did you know this symbol started out as an emblem for nuclear disarmament and became an intersectional symbol for peace, justice, and equality? 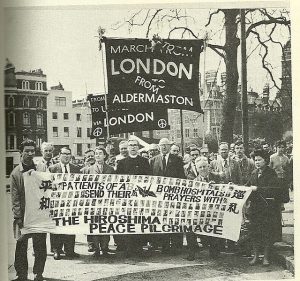 Barbara Leonard Reynolds with two survivors of Hiroshima in London during Peace Pilgrimage, 1962.

The peace symbol first appeared in April 1958, designed by Gerald Holtom as an emblem for the British nuclear disarmament movement. In the early 1950s, Britain began developing a nuclear arsenal and planned to test a hydrogen bomb at Christmas Island in 1956. The Direct Action Committee Against Nuclear War (DAC) was formed to resist this and they decided to hold a protest in Aldermaston, England in 1957. Gerald Holtom — a textile designer from Twickenham, England — designed the peace sign for that protest.

Holtom felt strongly that DAC’s march should have an associated symbol that would “leave in the public mind a visual image that meant nuclear disarmament.” The peace symbol actually stands for nuclear disarmament, combining the semaphore letters (a method of visual signaling) for N and D.

Soon, the symbol started appearing throughout Europe and elsewhere. Eventually, it made its way across the Atlantic to the United States where it became a symbol for the American anti-war movement and associated social justice fights. During the Cold War in the U.S., anti-nuclear groups, feminists, environmentalists, and civil rights activists found themselves working together for peace, equality, and justice — and the prevalence of the peace sign in these intersectional fights demonstrates this.

“For the past 50 years, millions of humans worldwide, regardless of their race or religious beliefs, have looked to the peace symbol to unite them.” – Ken Kolsbun and Michael Sweeney

From the feminist anti-nuclear group Women Strike for Peace, to anti-Vietnam War protests, to the Committee for Nonviolent Action (CNVA) that organized an integrated walk from Quebec to Cuba calling for peace and racial justice, the peace sign and messages of peace and justice reverbated across these movements. The Nuclear Freeze movement was inherently intersectional, calling for “a reorientation of power, away from top-down militarism and toward political structures that worked in harmony with the Earth.” The movement reached its climax with the 1982 Nuclear Freeze protest in New York City — that, of course, prominently featured the peace symbol on posters, flags, and clothing. 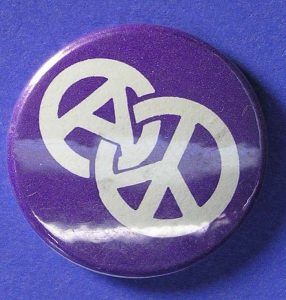 We know calling for nuclear disarmament from an intersectional lens works. The Nuclear Freeze movement solidified the dangers of nuclear weapons as a salient public issue, catching the attention of President Ronald Reagan, who came to support a freeze in the arms race and even a reduction in nuclear weapons. He began publicly saying that “a nuclear war cannot be won and must never be fought.” In April 1982, he specifically said, “To those who protest against nuclear war, I can only say: ‘I’m with you.’”

This rhetoric turned to action, leading to years of negotiations between the United States and the Soviet Union culminating in the 1987 Intermediate-Range Nuclear Forces Treaty, which eliminated an entire class of nuclear weapons and marked the first time the two superpowers agreed to reduce their nuclear arsenals. In 1991, the Strategic Arms Reduction Treaty, or START, was signed where both countries agreed to greatly reduce their nuclear arsenals. You can read more about the progress from the two countries on nuclear disarmament here.

The peace symbol continues to be the emblem at the center of many global social justice movements, from Italy to Venezuela, from the Philippines to Hungary. While it started off as a symbol for nuclear disarmament and came to represent so much more, it was intersectional from the beginning. The call for the abolition of world-ending weapons relates to and must be embedded in fights for climate justice, for an end to global wars, for universal healthcare, for racial justice. The Nuclear Freeze movement showed us that it is not only morally correct to resist nuclear weapons from an intersectional standpoint, but it is also a winning strategy. 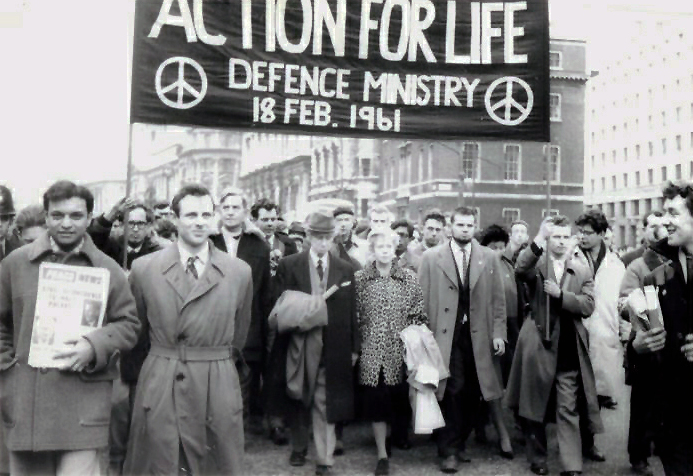 Nobody owns the peace sign; the U.S. Patent and Trademark Office made a decision in 1970 to keep the symbol available for anyone to use in the public domain. In a way, activism against nuclear weapons is also in the public domain. Anybody can do it, anybody can become an activist against nuclear weapons. And we must. We must honor the legacy of intersectional anti-nuclear activists who came before us by winning the fight to eliminate nuclear weapons. And we will only do this through intersectional activism.

“Over the years, the peace symbol has represented not just a vision but also a path. At first it reflected a grand philosophy, but it soon expanded to signify a united belief in a peaceful world, a movement in which everyone could participate.” – Ken Kolsbun and Michael Sweeney

Image #2: “Badge, protest” by Auckland Museum is licensed under CC BY 4.0.