The Intersection Between Nuclear Weapons and Prisons

At a staggering 2.3 million people, America’s prison population has increased 500% over the past four decades. The rapid expansion of the carceral system has been dubbed the Prison-Industrial Complex (PIC). First used in 1974 by the North Carolina Prisoners Labor Union, the term references the broad privatization of America’s legal system for maximized profits. Today, over 4,100 economic tycoons profit off of mass incarceration, including household names like Microsoft, Sherwin Williams, and Coca Cola. From food services to construction, the nation’s justice system is increasingly dependent on the private sector. The confluence of public and private interests make the PIC one of the fastest-growing industries in America. However, the criminal justice system is not the only government operation to be privatized. In fact, the term “PIC” is derived from an older industry: the Military-Industrial Complex (MIC). 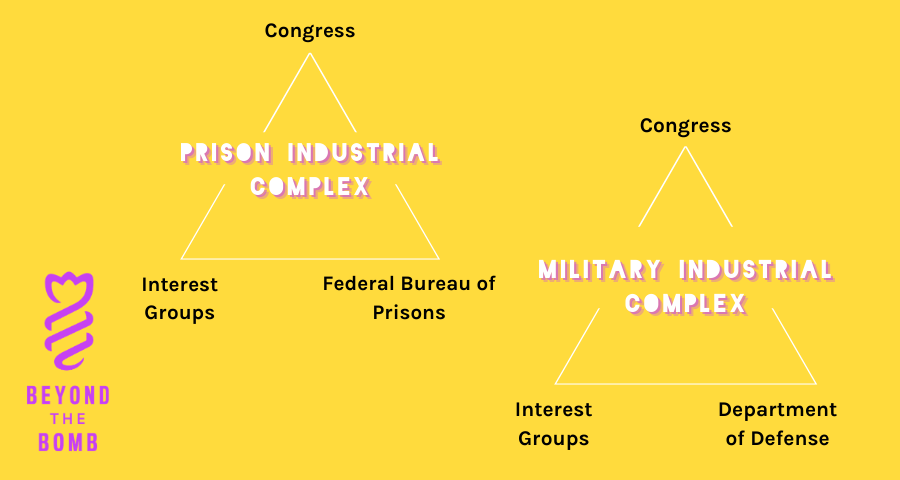 President Eisenhower popularized the term after his 1960 farewell address. The MIC materialized during the Second World War when the U.S. economy and defense industry grew inextricably intertwined. The Cold War also introduced the proliferation of our nuclear weapons. As our nuclear arsenal rapidly expanded, so did the involvement of avaricious corporations. Sounds familiar, right? Today, legislators implement nuclear policies to the advantage of these wealthy businesses and weapons manufacturers, not national security. The exclusive relationship between Congress, government bureaucrats, and private companies in politics is known as an “Iron Triangle.” Though nuclear weapons and prisons seem unrelated, both industries are ravaged by the same pervasive, underlying Iron Triangle. Abolishing both the prison- and military-industrial complexes requires a deeper understanding of the nuclear weapons complex.

The PIC’s Iron Triangle includes actors specific to the legal system. For instance, Congress implements legislation and a budget related to incarceration policies. Congressional committees then allocate funds to departments like the Federal Bureau of Prisons (FBP). The FBP hires private contractors for cheaper services, and in turn those corporations donate millions to ally themselves with legislators to ensure the renewal of favorable contracts. The nuclear Iron Triangle is nearly identical. Congressional committees begin by funding agencies, such as the Department of Defense (DoD). Then, the DoD externally contracts services to the lowest bidder. After they are hired, the contracted companies invest in the same public officials providing them with lucrative contracts.

The for-profit structures of the PIC and MIC encourage the government to carelessly spend public funds without public accountability.

The for-profit structures of the PIC and MIC encourage the government to carelessly spend public funds without public accountability. Each year, the government wastes upwards of $80 billion on the prison system, of which tens of billions line the pockets of external corporations. Likewise, the government will funnel more than $1.7 trillion into nuclear weapons over the next three decades — a budget large enough to pay off all existing student debt. Both the PIC and MIC are monstrous economic drains that average Americans are expected to maintain, but rarely benefit from. 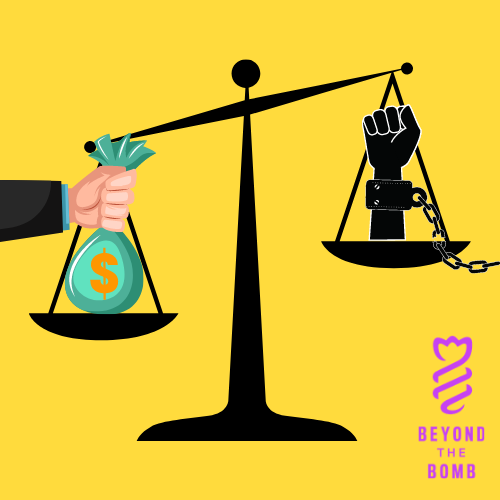 The most glaring similarity between the two is their unapologetic exploitation of People of Color, namely women. At a unique intersection of race and gender, Indigenous and Black women largely lack political exposure. This invisibility coupled with America’s painful legacy of racism and misogyny disproportionately victimize these particular communities. For example, Black women are imprisoned at a rate over 1.7 times higher than white women, and Black girls are 20% more likely than white girls to be formally petitioned in a juvenile court. Similarly, an AP News article reported that a quarter of Navajo women and some infants had high levels of radioactive metal in their bodies resulting from uranium mining on their reservation from the Cold War. Of the 781 women screened, 26% of them suffered from uranium levels higher than the top 5% of the U.S. population. Though the industries ultimately threaten each and every American, it is evident that Black and Indigenous women are particularly susceptible to their pervasive claws.

The government continues to prioritize the profitability of the Iron Triangle over the human rights and safety of its citizens. In doing so, they sacrifice the most vulnerable communities to uphold the facade of security.

So how do we dismantle them? We must demand accountability and amplify the voices of Black and Indigenous victims. Contact your representatives to support the Radiation Exposure Compensation Act. Also, consider donating to organizations and signing petitions in solidarity with incarcerated people. Most importantly, we must consciously listen to and learn from Black and Indigenous activists. The PIC and MIC are formidable foes, but not ones greater than the power of the people.