The Green New Deal and No First Use

On November 13, 2018, just one week after the much anticipated midterm elections, Democratic Representative-elect, 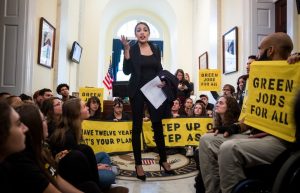 Alexandria Ocasio-Cortez, surrounded by hundreds of climate activists, announced her leadership on a Select Committee for a Green New Deal. Backed by the Sunrise Movement, the principle organizing group on the issue, her leadership and subsequent Congressional support on the Select Committee is being touted by most major environmental organizations as one of the best chances for climate justice. Vox columnist David Roberts has also said the establishment of the Select Committee would be “the first time in US history that a Democrat has proposed a plan for addressing climate change that actually scales to the problem and has some chance of influencing the party’s agenda.” This scalability offers a new set of strategic possibilities for No First Use – a sensible policy in which a nuclear power pledges not to use nuclear weapons unless first attacked with nuclear weapons – while remaining true to the focus on climate justice which would be irreparably harmed by the use of nuclear weapons.

This scalability offers a new set of strategic possibilities for No First Use – a sensible policy in which a nuclear power pledges not to use nuclear weapons unless first attacked with nuclear weapons – while remaining true to the focus on climate justice which would be irreparably harmed by the use of nuclear weapons.

So, what exactly is the Green New Deal?

The House Select Committee would be responsible for developing a detailed national, industrial, and economic mobilization plan for the United States. The proposal calls for a society that is based in 100% renewable resources while centering equity at the core of its work. Under this proposal, some goals would include: building an energy-efficient, smart grid; working to eliminate greenhouse gas emissions; and bringing back economic justice to all members of society during a “green” transition. The significance of a Select Committee on the Green New Deal would bring forth a long overdue agenda of green policies all working to bring the United States back from the brink of climate catastrophe — the greatest acceleration to a climate doomsday undoubtedly being a nuclear winter after the use of nuclear weapons 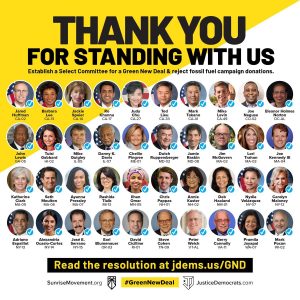 How can the Green New Deal be a strategic committee for No First Use?

The structure of the Green New Deal calls upon four principle pillars: An economic bill of rights, a green transition, real financial reform, and a functioning democracy. In particular, the fourth pillar calls for  reigning in the military-industrial complex and specifically includes a new round of nuclear disarmament initiatives as a critical step for achieving its goals. . This particular language can and should specifically mention No First Use as the means to accomplish that. Beyond the Bomb stands for a No First Use policy because no individual or Congressional body – by intention or miscalculation – should ever be able to threaten the annihilation of entire states and cities. Furthermore, these trillions of dollars that go toward our nuclear arsenal should be redirected to the actual needs of our communities, such as green jobs, healthcare, and education.

With just over two weeks left before the 116th Congress convenes, the momentum for a Green New Deal is building. Already, more than 35 members of Congress, 200 organizations, and thousands of people support the Select Committee, with more joining every day. This hype, along with predictions of the Green New Deal being a topline 2020 presidential campaign focus, presents a pathway to include No First Use in the fight for climate justice. And, Beyond the Bomb will be there every step of the way – to elevate this critical policy whenever possible.