Survival of the Wealthiest: A Luxury Nuclear Bunker Story

Brittanie Van Zant is a #FutureFirst fellow and a committed wife, mother, and student based in Chicago, IL. Her ultimate commitment is to leave the planet a safer, cleaner place for generations to come.

The threat of nuclear war is ever-present, but not on the forefront of the average American’s thoughts. The ultra-wealthy elite, on the other hand, are well aware of this threat. They have created demand for a luxury survival industry to keep up with their contingency plans for potential global devastation, like that of nuclear war. The cornerstone of these plans? Luxury doomsday bunkers.

These bunkers are nothing like the cold, concrete, and metal bunkers of the past. Instead, they  come with all the amenities of their above-ground domiciles, ranging from essential needs like water and sewage systems to luxuries like entertainment systems, simulated sunlight, and even gyms and spas. They even have the capability to sustain human life for a minimum of a year underground. Indoor greenhouses outfitted with growing lamps will offer the capability to grow fresh fruits and vegetables to sustain nutrition and supplement the food rations. One of the most common features of these luxury bunkers is an Nuclear Biological Chemical (NBC) air filtration system, which takes the contaminated air, and filters and pressurizes it for the bunkers’ occupants. These NBC systems can cost more than $10,000 USD and are already being used to filter out the COVID-19 virus.

The Oppidum will be the largest billionaire bunker compound in the world. According to The Mirror, this luxury compound will be located on a 323,000 square foot property in the mountains in an undisclosed location in the Czech Republic. When completed, this underground bi-level compound will boast 77,500 square feet, along with 13 feet ceilings, one large 6,750 square foot apartment, and six 1,720 square feet individual apartment homes. The average apartment size in the U.S.? 914 feet.

“Survival condos” in Kansas City, Kansas can cost anywhere from $500,000 USD to $2.5 million USD based on the floor plan. Built in a former missile silo which was constructed during the Cuban Missile Crisis of the 1960s during John F. Kennedy’s presidency, these “modern condo-bunkers” can be decorated to each owner’s taste. They contain 12 units, 90 feet underground, complete with decontaminating station, jail-cell, gun range, movie room, bar, water filtration system, a five year supply of canned and prepared food, library, classrooms, gym sauna, game room, laundry rooms, and even wi-fi internet capabilities and a pool equipped with water-slides. These bunkers are so luxurious that many of the owners will visit for week-long stays as an escape from the outside world and the rigors of daily life.

The inequity of the elite’s ability to replicate the comforts of their everyday lives while not challenging the existence of these mass killing weapons truly illuminates the economic injustice of a capitalist society and the grim truth that the wealthy will be more likely to survive a nuclear apocalypse.

Bill Gates is among the many Silicon Valley billionaires who have spent millions of dollars in cash on several underground survival bunkers. In private Facebook groups, these wealthy survivalists swap tips on their respective bunkers. One member of a Facebook group told the New York Times, “I keep a helicopter gassed up all the time, and I have an underground bunker with an air-filtration system.” In addition to their bunker, many have purchased long-range armored vehicles, helicopters, and motorcycles to swiftly transport them to their safe haven.

NASA psychologists have consulted in the design of these shelters to ensure the survivability and psychological stability of living in a bunker for an extended time period. The features they recommended included nine-foot high ceilings and televisions with live feed of the outside world to give the appearance of windows. The residents can also choose views of a specific cityscape or arial vantage which gives the illusion of living above ground anywhere in the world. Fancy! 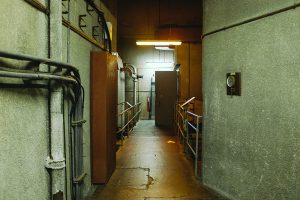 But, what about the average person who wishes to survive a nuclear strike? A makeshift fallout shelter can be constructed in your home using common materials like bricks, wood, and dirt. It is the depth and width of the material which will limit the exposure to the radiation. The basement concrete block shelter is a great option for those of us without the access and resources to build a luxurious underground bunker. According to The Family Fallout Shelter manual, this is the easiest option to construct without hiring a contractor.  Don’t worry, you can take care of business with a bucket fashioned into a makeshift toilet until the risk of fallout has subsided. This is indeed a stark contrast from the more luxe counterparts.

The inequity of the elite’s ability to replicate the comforts of their everyday lives while not challenging the existence of these mass killing weapons truly illuminates the economic injustice of a capitalist society and the grim truth that the wealthy will be more likely to survive a nuclear apocalypse. The ability and access for private wealthy citizens to purchase decommissioned military silos and bases for their personal use and survival without making them available for all highlights our society’s flaws and class stratification, supported by the political elite and the military industrial complex.

This begs the question: What should our focus be? How can celebrities and average citizens alike use their voices to help prevent nuclear war? Celebrities’ influence would be greatly suited to the promotion of anti-nuclear war policies like the No First Use Act. This policy would prevent the United States from ever launching a first strike against an adversary, thereby starting a nuclear war. Everyday citizens can contact their Senators and Representatives to let them know they support No First Use. This legislation makes a progressive statement and sets an example to other nations that nuclear war is not a viable solution to any political conflict.

Picture #1: Nuclear Bunker by Scott Wylie, licensed under CC BY 2.0.