She the People Summit: The Powerhouses of a Movement

I saw the future of the progressive movement, and of the United States, and it was colorful, inclusive, and just.

Last week I attended the She the People Summit in San Francisco. I was excitedly anticipating Aimee Allison’s brainchild event as I had seen her speak and moderate panels at Netroots Nation this year.

I was not disappointed.

The room was full of powerful, caring, and fierce women of color. From the moment I arrived I felt welcomed, wanted, and heard. Everyone was there to create community and change together, regardless of the extent of their “power” and visibility in the movement. To enter a space with that collaborative intention is a departure from the strict hierarchies that can dictate our daily lives, and, in fact, opens our imaginations and the possibility of our joint liberation. 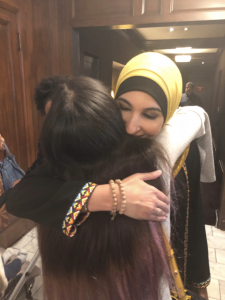 Intersectionality was front and center throughout the summit. Speakers such as Vanessa Daniel of Groundswell Fund drew connections between money in politics and environmental degradation. Saru Jayaraman of ROC-United spoke to how the lack of a living wage fosters an atmosphere ripe for sexual harassment in the workplace. It gave me so much hope to be surrounded by people who understood deeply that we cannot hope to effect change unless we understand how injustice is connected at all levels.

The nuclear system is no exception. As we work to prevent nuclear war we cannot forget those who suffer the side effects from exposure to radiation or those who have had their land stripped for mining nuclear material. We cannot overlook how nuclear rhetoric contributes to toxic masculinity, a sense that violence is the answer and the victim deserves it. Or even how our broken campaign finance system allows weapons producers such as Lockheed Martin to dictate our national security priorities.

At a time when “leaning-in” has gained popularity and the top weapons producers boast their progressivism by being women-led, She the People understands that increasing representation in entrenched systems of oppression and violence is no way to change the status quo. Lifting oneself up independently means we are not changing the conditions that made it so hard to get ahead in the first place. Violence and injustice are still being committed, regardless of who is at the helm.

Leaving the summit I feel inspired knowing so many powerful women have my back, have our backs. In that room I saw the future of the progressive movement, and of the United States, and it was colorful, inclusive, and just. 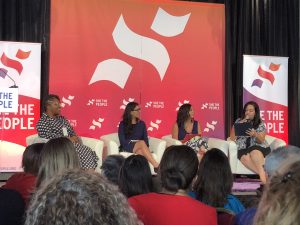 Wendy Carrillo, right, moderates a panel “The women building a politics for all of us.”