The pair of days separating the anniversaries of the bombings of Hiroshima and Nagasaki are as good a time as any to reflect on what it means to remember the event, even as the majority of people alive today have no personal memory of early August 1945.

It seems that the visceral, horrifying proof of the extent of human suffering caused by a nuclear explosion hasn’t done much to eliminate the sources of that suffering from the world. Quite the opposite: today – everyone on earth lives under threat of destruction many, many times more powerful than that witnessed in either Japanese city. It’s worth noting that both of the bombs dropped 73 years ago would by today’s standards be considered “low-yield,” something to keep in mind when evaluating the news that the 2018 Nuclear Posture Review calls for building a “low-yield” nuclear weapon which might be used to conduct a “limited” nuclear strike.

The failure of memory to compel political change and the impossibility of memorializing the event has long been a theme in artistic representations: as early as 1959, Alain Resnais’ film “Hiroshima, Mon Amour” explored the inadequacy of both art and nonfiction to portray the devastation of a nuclear attack.

All of which is to say, there’s so much that’s been said about the memory of Hiroshima and Nagasaki in the past seven decades, that it would be all but impossible to get through. Rather than try, here’s a list of seven great reads from across the internet on Hiroshima, Nagasaki, memory, and the uses and abuses of history:

The Bureaucrats Who Singled Hiroshima Out For Destruction 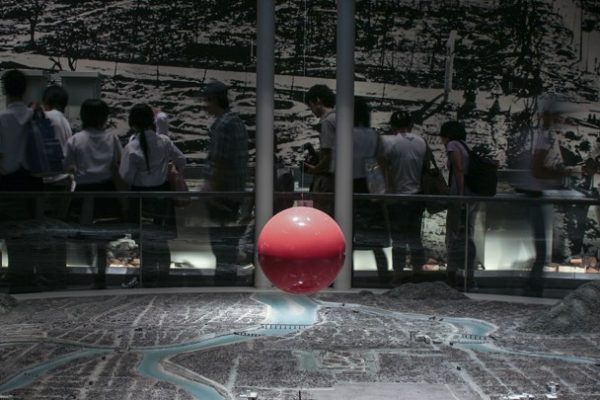 Start with a historical long read from The Atlantic about why and how Hiroshima was chosen as the first target for the atomic bomb.

Alex Wellerstein, a historian of science perhaps best known for the fascinating, terrifying NukeMap, writes in The New Yorker on how the bombing of Nagasaki was very much a Plan B. The original target, the city of Kokura, was obscured by smoke. Wellerstein doesn’t skimp on the surprising, often poignant details of the bombing, and the result is heart-rending.

After Hiroshima, now that the bomb was no longer a secret, the Army Air Forces had drafted propaganda leaflets to inform the people of Nagasaki about the possible coming shock – as much an act of psychological warfare as a humanitarian warning. But internal coordination with the bombing crews was so poor that the leaflets were delivered late. They fluttered down over the city the day after Fat Man went off.

Brandon Shimoda, a Japanese-American poet whose writing crosses genre boundaries to explore the experiences of Japanese people in Japan and America in the 20th century, recounts the testimony of hibakusha (survivors of the bombings) he recorded when he visited Hiroshima on the anniversary of the disaster in 2011, at Entropy Mag:

I am the youngest who still remembers that day…Every year I stand on the riverbank…There were a bunch of bananas and oranges…My mother sold her wedding ring to the army…Americans had a tall nose…Shiny…Children had to bite [edible grasses] 100 times…They heard a kind of rumor that near Hiroshima City there had been a big fire…At midnight they tried to escape from the temple…That was the time the teacher decided to tell the children about the atomic bomb…Look at the Buddha—can you see all the faces behind the Buddha? Your parents are already in heaven…Only this year did I ask my brother how he spent his days in the temple…I want you to understand the invisible scars of the survivors, the invisible sorrows…

Why the United States did not demonstrate the Bomb’s power, ahead of Hiroshima

Frank Von Hippel and Fumihiko Yoshida, writing for the Bulletin of the Atomic Scientists, tells the story of the Franck Report, a report by a group of scientists arguing against the use of the bomb on an occupied city published in 1946 in the same publication. It’s a startling read that lays out how those who built the bomb implicitly understood the fundamental political dynamics of a world with nuclear weapons, and a powerful reminder that there was nothing inevitable about their uses. (The Bulletin has put together a list of its writing on Hiroshima and Nagasaki, available here.)

If we consider international agreement on total prevention of nuclear warfare as the paramount objective, and believe that it can be achieved, this kind of introduction of atomic weapons to the world may easily destroy all our chances of success. Russia, and even allied countries which bear less mistrust of our ways and intentions, as well as neutral countries, will be deeply shocked. It will be very difficult to persuade the world that a nation which was capable of secretly preparing and suddenly releasing a weapon, as indiscriminate as the rocket bomb and a thousand times more destructive, is to be trusted in its proclaimed desire of having such weapons abolished by international agreement.

Ghostly Remnants of the Urakami Cathedral

Tomoe Otsuki, writing in Evening Will Come, explores the ways that the memory of the bombing of Nagasaki was preserved – and obscured – by telling the story of the Urakami Cathedral and the decision to dismantle its ruins. (The site published a multimedia collection focused on the bombings of Hiroshima and Nagasaki back in 2015. See the whole thing here.)

Controversy over the Enola Gay Exhibition

Today, you can see the Enola Gay at the Steven F. Udvar-Hazy Aviation Center of the National Air and Space Museum. But, the path from the skies over Hiroshima to a converted airport hangar in Chantilly, Virginia was a long and uncertain one. Along the way, planners were forced to grapple with the task of memorializing an event that still had profound personal and political consequences, even decades later. Read all about it in this dispatch from the Atomic Heritage Foundation from 2016.

Why MLK Day is a Big Deal in Hiroshima

And finally, a quick read from Atlas Obscura on the popularity of Martin Luther King, Jr. in Hiroshima and the legacy of his often-overlooked but vocal opposition to nuclear weapons. As he said in his Nobel lecture in 1964:

“Somehow we must transform the dynamics of the world power struggle from the negative nuclear arms race which no one can win to a positive contest to harness man’s creative genius for the purpose of making peace and prosperity a reality for all of the nations of the world.”