What do activist groups from California, New Mexico, and South Carolina have in common? And why might such a diverse crew have filed a group lawsuit in June of this year, against the Department of Energy and the National Nuclear Security Administration? The answer to that question says a lot about the environmental implications of nuclear weapons, and what tactics exist to protect communities – and the world – against the threat nuclear weapons pose. 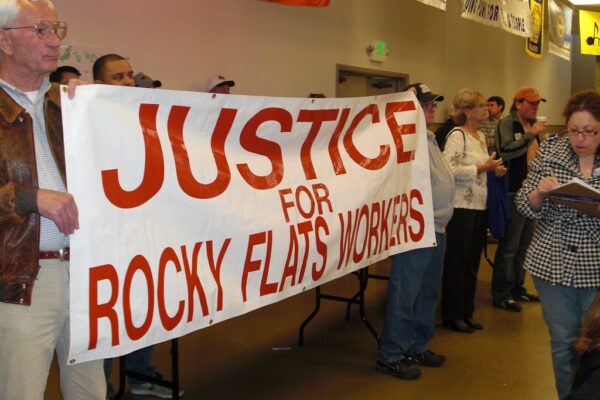 “CO: Justice for Rocky Flats Workers” by AFL-CIO Field is licensed under CC BY 2.0

Between 1952 and 1989, Rocky Flats Plant in Golden, Colorado produced thousands of plutonium pits until they were raided by the FBI and EPA for environmental crimes. This raid was the result of extensive public pressure, and years of environmental misdeeds, including leaking barrels of toxic waste, and major fires that released radioactive waste into the air. Following the raid, Rocky Flats’ “official mission” was no longer plutonium pit production, but environmental remediation. Since then, the US has not produced plutonium pits at scale. That will perhaps soon change.

The Pentagon has a plan on the books to “modernize” the United States’ nuclear arsenal. As a part of this nuclear “modernization” (read: rearmament) campaign, the Department of Energy (DOE) is proposing the production of at least 80 more plutonium pits by 2030. These pits will be produced at Los Alamos National Laboratory in New Mexico, and the Savannah River Site in South Carolina.

This nuclear rearmament strategy was announced by the National Nuclear Security Administration (NNSA) in 2018, and has been rapidly advanced without a thorough environmental impact analysis of both sites. The NNSA announced that it did not need to conduct an environmental review at Los Alamos, and could rely on analyses completed over 10 years ago.

@SRSWatch @NuclearWatchNM Tri-Valley CAREs & the Gullah Geechee Sea Island Coalition are seeking an extensive study, known as a programmatic environmental impact statement, to weigh effects of new pit plants on the environment & people who live near them. https://t.co/ceyEDU7bGd

That is where our interstate activist crew comes into the picture. In a group lawsuit against the U.S. DOE and the National Nuclear Security Administration, a “coalition of community and public interest groups” are pushing back against this failure to conduct a thorough environmental review.

The group, composed of communities impacted from the nuclear weapons development and testing that has plagued California, New Mexico, and South Carolina, are demanding that the government conduct a thorough environmental impact analysis surrounding the increase in plutonium pit production.

Georgia WAND envisions a world without militarism or systemic violence, with just, healthy, secure, and sustainable communities, and in which Georgia is a leader in regional, national, and global movements. Learn more and get involved at https://t.co/i4cwuNzhld. pic.twitter.com/Z9JjUGz24S

This is a critically important case given the scope of destruction that 80 more plutonium pits can create. Not only do plutonium pits have potentially disastrous impacts on the ecosystems they’re produced in, they also serve as the radioactive cores that power atomic bombs – they enable the potential destruction of everything. Nuclear-impacted communities are not sitting idly by, however – they are working together in solidarity to hold the government accountable and ensure a safer future for all of us. Get involved with organizations on the frontlines, like Georgia Women’s Action for New Directions, Nuclear Watch New Mexico, Savannah River Site Watch and Tri-Valley CAREs or uplift their work on social media!  We should be paying close attention.

“CO: Justice for Rocky Flats Workers” by AFL-CIO Field is licensed under CC BY 2.0