On September 29, Washington Physicians for Social Responsibility and the Washington Against Nuclear Weapons Coalition presented a People’s Town Hall on Nuclear Weapons. This conversation informed the public and elected officials about the damage and dangers of nuclear war, examining Washington’s nuclear arsenals and the role of our state’s industry in producing them. People whose communities have been directly impacted by the long legacy of the nuclear weapons industry in Washington State testified at the Town Hall. The Town Hall culminated in the development of a resolution based on this testimony, complete with recommendations for action needed by Congress to be delivered to the Washington Senators. This is testimony from Jeanelle Sales, an organizer at Beyond the Bomb’s chapter at the University of Washington. 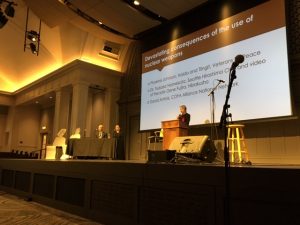 My name is Jeanelle Sales and I am the Member Relations Officer for Beyond the Bomb, UW Chapter. Our student organization is a branch of a much larger national campaign. The mission is to prevent nuclear war through building power on the local, state, and national levels.

On my campus, most students walk past our posters that call for action without a second thought. We were born into a society that normalizes fear. Whether it be mass shootings or the threat of immediate total nuclear destruction, why is the argument “more weapons to keep us safe” while they cause and increase the danger?

We need more young people to care about what government officials are choosing to do with taxpayer money. The quality of our future is at stake: health care, retirement, and dealing with tuition debt. There are so many other things to worry about and it’s understandable why people today might not be visibly concerned with the immediacy of nuclear weapons issues.

“What impact can I alone have?” is a question that both discourages and excites young people. Just being aware of the issues, connecting nuclear catastrophe to climate change, power imbalances, and health disparities will make a more engaged constituency. We are the newly empowered voters that the leaders in office want to win on their side. We need to voice our opinions loud and clear regarding what kind of future we demand.

For me, I refuse to have a government prioritize extremely expensive weapons of mass destruction just to show off to our competitors while we are still internally unstable as a society: deep debt from loans for school and medical expenses, unemployment and homelessness levels, discrimination still prevalent towards marginalized communities, and communities expected to go underwater. How can we keep saying that we are role models to the world when our leaders splurge on unnecessary destructive toys while the majority of our people are still struggling?

A handful of students stop to talk to us about what kinds of petitions we are working on. Many care about nuclear weapons issues. What we lack today is the belief that we can tackle such a huge complex one. “Maybe later, next time,” are also answers we get from the younger generation. But for me, if not now then when? And if not you, then who?”