Nuclear Waste and Climate Change: The Intersectionality We Aren’t Talking About Enough

Every semester Beyond the Bomb is excited to welcome new interns. This is the second in our series of personal essays and blog posts featuring their voices.

The consequences of a nuclear blast lingers forever.

Take, for example, the Marshall Islands, home to nuclear waste leftover from United States nuclear weapons testing that lasted from 1946 to 1958. Cancer, lung diseases, and neurological disorders have become a reality for many of those in the northern Marshall Islands, thanks to the nuclear testing and the continued storage of toxic nuclear waste on the island. In 2005, the National Cancer Institute reported that the risk of contracting cancer for those exposed to fallout was greater than one in three. The Marshall Islands are also their own kind of food desert — most food has to be flown in, because fish and crops aren’t safe to eat. 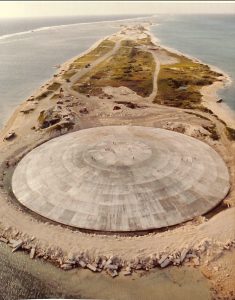 Aerial shot of Runit Dome, which covers the crater created by US nuclear testing in the Marshall Islands.

After decades of cancer, birth defects, and a consequential agreement with the US, the Marshallese people are fully aware of their radioactive history. Annually on March 2nd, the Marshallese participate in Remembrance Day, a time devoted to reflect upon the lives lost from the nuclear fallout. Lamenting their ancestors’ suffering, a Marshallese councilwoman declared, “As a result of being displaced we’ve lost our cultural heritage — our traditional customs and skills, which for thousands of years were passed down from generation to generation.”

When you hear about nuclear war and its negative connotations, you likely think about the immediate death and devastation but the consequences reach far beyond that. We literally only have one planet, and governments have decided to test nuclear bombs on it and pack it with toxic nuclear waste. The side effects of these poor choices contaminate the earth and harm everyone on it.

Furthermore, the Marshallese still face a clear and present danger from the radioactive debris the US hastily covered with a shoddy concrete dome. A cement cap was placed over the nuclear waste pit, nicknamed ‘the tomb,’ where the US army made a single attempt to clean up the islands before they left the island altogether. This dome was a temporary solution to a permanent problem. One would have hoped the United States would have considered the possible outcomes of leaving the waste where they did. Unfortunately, they did not care. Years later, the cap that once held in the waste is beginning to crack.

This decaying, temporary measure was handed off to the Marshallese in their Compact of Free Association with the US, in which “all claims, past, present and future” became the responsibility of the Marshallese, in return for their independence.  The US obviously did not account for climate change. Now, rising sea levels are threatening the structural integrity of the dome. Alson Kelen, a climate activist, aptly describes this dome as “the connection between the nuclear age and the climate change age.”

“As a result of being displaced we’ve lost our cultural heritage — our traditional customs and skills, which for thousands of years were passed down from generation to generation.” – Marshallese councilwoman Lani Kramer 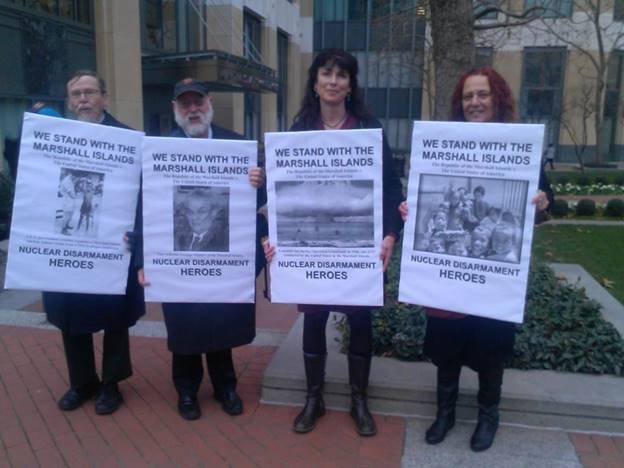 The tragedy that has occurred in the Marshall Islands is not an isolated incident. The story is much the same in other parts of the globe. Melting Arctic glaciers in the northern hemisphere have absorbed radioactive detritus from the collective fallouts of the Marshall Islands, Chernobyl, and Fukushima. Similar collections have been recorded in the Tibetan plateau. Right in the heart of the US, Missouri residents living in the outskirts of St. Louis are currently exposed to excess radiation from the West Lake landfill. After years of grassroots efforts from groups like Just Moms, the EPA announced only last year that they would begin cleanup.

So where does this leave us? There are multiple ticking time bombs of the atomic age threatening our world, even without the continued use of nuclear weapons. Our nuclear capabilities have un-mistakenly had a detrimental impact on our planet, which is why we can think of no better time for a referendum. The nuclear age has proven to be a failure at every step of the way. So why is there $11.1 billion dollars for nuclear weapons in our budget, much of which is spent on modernizing them? Our resources should be spent on those who were affected by the carelessness of nuclear testing, and the growing environmental risks that our nuclear past poses. Join us in calling on our representatives to end a new nuclear arms race now, before it’s too late.