Nuclear Testing in the Age of COVID-19

Life was arguably ‘normal’ before COVID-19 made her debut worldwide appearance. The coronavirus is now affecting 213 countries and territories with over 5,700,000 confirmed cases and climbing. In the U.S., we are on the cusp of 100,000 deaths. Now, days pass with ambiguity and increasing anxiety. In the chaos created in the wake of the coronavirus, many things have been left uncertain in modern society, as well as in the lives of individuals. The coronavirus has uprooted long held beliefs about foreign policy, healthcare, and even home life – confronting people with the sudden realization that these ‘normalcies’ that we once took for granted might not ever return.

However, one thing that should not return in the wake of COVID-19, is nuclear testing.

The Trump Administration, despite largely leaving the responsibility of COVID-19 testing in the hands of states, and referring to the federal government as a “supplier of last resort,” is considering a new avenue to pour money into. Unsurprisingly, it isn’t to help the people of the United States in their fight against the virus. After a 28-year hiatus, the Trump Administration proposed conducting the first U.S. nuclear test since 1992. Something that could have dire consequences to say the very least.

Historically, the widespread nuclear testing that occurred from the 1940s to the 90s had staggering effects on the environment as well as local communities in close proximity to test sites. In a supposed effort to avoid harming people, nuclear tests were often conducted by the government underground, underwater, or even in the atmosphere. However, these efforts proved to be futile, as nuclear fallout and pollution contaminated water supplies, soil reserves, and contributed heavily to air pollution and global warming.

The United States has a responsibility to acknowledge its role and the damage it has historically inflicted with nuclear weapons. 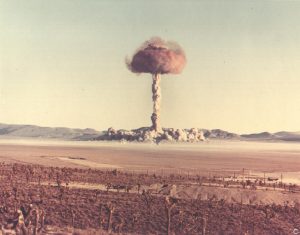 Nuclear fallout is a result that occurs from the mixing of soil with nuclear fission products that are released from the weapon upon detonation. When testing nuclear weapons, governments globally have been unsuccessful in finding ways to contain the spread of nuclear contamination and pollution. Often, radioactive debris is carried back to earth, and nearby communities suffer the lingering destructive effects. Exposure to radiation can result in genetic mutations, rare cancers, and even death depending on the dosage. After all, just like the coronavirus, nuclear fallout is not contained by borders.

Take for example the Marshall Islands, which holds more than 3.1 million cubic feet of U.S. produced radioactive waste in what is called ‘the Tomb’ or the Runit Dome. From 1946 to 1958, the United States detonated a total of 67 nuclear tests on the Marshall Islands. These tests had lasting effects on the Marshallese community as well as the land that surrounds it. Nuclear testing poisoned the bodies of people which resulted in various forms of cancer and illness. It also poisoned the land people depended on to survive, as to this day a majority of food has to be flown in. Soil and water can often hold radiation, and this has poisoned the food supply. The U.S. essentially saddled the Marshallese with the waste from their Cold War atomic testing program, and left the community to deal with the consequences of their mess. Providing little help, even today as the Tomb that holds the U.S.’s nuclear waste in the Marshall Islands has become compromised due to global warming and rising sea levels.

If there is one thing the coronavirus has shown, it is that what affects one of us, affects us all. In the just 6 months since the first coronavirus case was confirmed, COVID-19 has completely turned the world upside down. With a majority of the world quarantined or social distancing, communities remain uncertain about what the future might hold. A future with nuclear testing is a future of uncertainty, and it is the last thing we need at any time, but particularly during this moment of global crisis. This virus has shown that we are not insusceptible to these larger world problems, and what impacts one country, impacts us all. The production and use of nuclear weapons, just like the spread of the coronavirus, would also have widespread global implications.

Instead of allocating more money towards nuclear testing and production, the U.S.  should support the lives of its people in turning the tide against COVID-19. Already, too many lives have been lost in this fight, and the Center for Disease Control’s (CDC) budget has proven inadequate to face this pandemic. While it is still unknown what the ramifications of coronavirus will be on a worldwide level, it is now more imperative than ever to think about the ramifications of our actions in the U.S. and abroad. It is irresponsible to put more money to fund these genocidal weapons, when we are already suffering under the weight of this pandemic.