By Tristan Guyette and Hallie Cunningham

The bombings of Hiroshima and Nagasaki deserve to be remembered year round. The loss of 140,000 people cannot be relegated to the ending notes of your high school history class and less than a week of mourning before we lather, rinse, repeat next year. Decades after America dropped Fat Man and Little Boy on Japan, the American people still remember these bombings as the difficult yet patriotic act that ended World War II. The unmitigated violence and disaster brought about by two nuclear weapons was packaged and sold as a necessary step, and this lie has followed us to 2019. If might makes right, there is no room for peace.

The myth of the need for nuclear war against Japan is ingrained in American school teachings, a way of pacifying any guilt we might feel over the painful deaths of 140,000 people and the lingering, equally painful deaths by cancer that lasted decades after. If we don’t need to feel shame over the bombings of Hiroshima and Nagasaki, why would we then feel shame over more recent actions – like the murder of wedding guests “by mistake” multiple times, or the role the United States has played in the genocide of Yemeni civilians, including targeting children.

It is ingrained into the American public education system to never take responsibility for our actions. Students are taught that a bomb was a rational choice, and the only one at that. Instead of teaching children about how situations can be de-escalated, they are instead taught that the most extreme choice is the right choice. 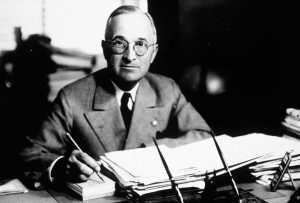 Only a year before the bombings of Hiroshima and Nagasaki, Japanese internment camps and the practice of imprisoning innocent citizens had ended. Yet, the America vs. Them mentality – even if the “them” in this case was American citizens of Japanese descent – was heavy in the minds of the American people. Truman always insisted that he felt “no remorse” over the decision to use the bombs, saying he “never lost a minute’s sleep.” After all, Truman was pretty clear that he viewed the Japanese people as “savages, ruthless, merciless and fanatic” and referred to the Japanese as “beasts” months later.

“The only language they seem to understand is the one we have been using to bombard them. When you have to deal with a beast you have to treat him as a beast.” – President Truman

These past few days, we’ve mourned the loss of Japanese civilians, but rarely do we connect the legacy these bombings have left on the American psyche. The advent of nuclear warfare has changed the way the entire world goes to battle. By removing the humanity of victims, by referring to bombs that would level schools and communities as “low-yield,” and by refusing to examine the way we’ve all been taught to think of these things, we remain trapped in a paradigm of “America vs. Them.”

A question constantly posed is “do we help those at home or those at sea first?” The reality is we can do both. By adopting policies like No First Use and directing nuclear funding to other 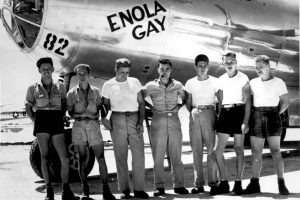 outlets, we are not only benefitting the American people, but the safety of the world, too. We can take the billions of dollars used for nuclear weapons testing and pour it into our education system, equipping teachers for conversations about the true impacts of dropping a nuclear weapon. These funds can provide healthcare for communities stricken ill by nuclear waste pollution, like those living near test sites. When we are truly united in the fight against nuclear weapons, we can find peace. As we remember the bombings of Hiroshima and Nagasaki, we must remember to never let them happen again. Write your member of Congress here to demand they support No First Use, and honor the memory of thousands of lives already lost.