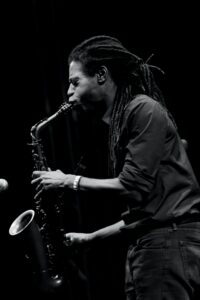 I’ve been playing classical piano since I was in third grade and, oh man, nothing has ever made me want to slam my head up against a wall quite the way learning jazz has. I remember waking up on Saturday mornings to go to piano class and getting yelled at because I wasn’t playing evenly and accurately enough. Now, as I’m learning jazz, I get yelled at because I’m playing too evenly and too accurately. Besides giving me whiplash (pun intended), learning jazz has given me the opportunity to really delve deep into the history of the genre especially as a form of protest music, exploring the intersections of jazz, peace, and Black history. The revolution may not be televised, but it’s going to sound great.

Jazz is all about resisting the status quo and breaking down barriers!

Jazz is a style of music that really goes against all norms of typical classical music. Classical music, created by Europeans in the 1700s, is formulaic, with a very rigid and strict way of playing. The goal is to play what is written on the sheet music exactly as the writer intended it.  Jazz, on the other hand, is much more free and experimental. While there are correct ways to play jazz, creativity and improvisation take center stage.  It’s all about breaking away from a rigid European style of playing and creating your own sound. Both in its style and its content, jazz is all about resisting the status quo and breaking down barriers!

During the 1700s and 1800s, jazz emerged as a form of spirituals, communal music, and resistance. During the Great Migration in the early 1900s, it made its way north to Harlem and Chicago and gained more attention during the Harlem Renaissance. Jazz has always been political, from its roots in spirituals that spoke directly to the Black experience in the United States, to its use as a tool to generate conversations on hard topics. In an era when Black voices were not valued, music and jazz allowed them to be heard.

Noteworthy examples of early jazz music include Billie Holiday’s take on Abel Meeropol’s “Strange Fruit,” a song written in response to the 1930 lynching of Thomas Shipp and Abram Smith in Indiana. Charles Mingus’ 1959 song “Fables of Faubus” was a direct protest against Arkansas governor Orval Faubus who, two years earlier, had called in the National Guard to block the integration of Little Rock Central High School. John Coltrane’s “Alabama” from 1963 was written in response to the four young African-American girls who were killed by a Ku Klux Klan bombing at a Baptist church in Birmingham.

Not only were these songs a literal protest to the injustices happening at the time, but the music itself was also a protest against colonial styles of music. While European styles of music required even pacing and strict attention to sheet music, jazz takes all of that and throws it out the window.  Every part of jazz is about resisting and breaking away from European influence and it’s incredible! 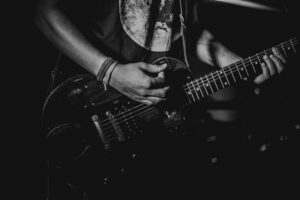 Jazz has always been a way to voice political opinions and, yes, that includes nuclear weapons and war. One of the most recognized jazz musicians that did this was Sun Ra with his songs “Nuclear War ” and “Retrospect.” Sun Ra does a lot of experimental and free jazz and while “Nuclear War ” can definitely fall under said category it’s surprisingly simple in comparison to his work which typically employs more complex musical elements. This was likely done to keep the focus on the lively, blues-like, call and response chants between Ra and his Arkestra.

The song is almost humorous as you hear Ra call nuclear war a motherfu… well you can imagine the rest (can’t say I disagree, I suppose) and the Arkestra responding with dispassionate replies and backing vocals. We later hear Sun Ra tell us that if they push the button you’ll be blasted “so high in the sky, you can kiss your ass goodbye,” and later about radiation, mutation, and all kinds of terrible effects that come from nuclear war. “Retrospect” completely does away with vocals and utilizes electric piano and horns to create a song that is meant to represent looking at the aftermath of the nuclear war we heard so much about in his other song.

Jazz and its artists truly are all about breaking away from the rules! Sun-Ra’s music on Nuclear weapons highlights a different style of resistance that’s often overlooked when we think about the fight against nuclear weapons. Protests and resistance can range from marches and strikes to music and art. Music is special because of its accessibility. There’s no pressure to read dense articles about topics when you’ve got a fun tune and carefully thought-out lyrics to give you the low-down on what’s happening. Nuclear weapons can feel like a pretty overwhelming issue to fight, but the accessibility of music is such a great way of starting conversations about it with folks who may not have paid attention to the topic beforehand.

Not only were these songs a literal protest to the injustices happening at the time, but the music itself was also a protest against colonial styles of music.

Black citizens were the first to speak out against Truman’s decision to drop the bomb on Hiroshima and a critical part of the nuclear freeze movement. However, our history has a funny way of erasing the work of Black activists. Music has such a wonderful way of opening up conversations about all different kinds of topics. Our history books might have been able to erase Black protesters as they fought against nuclear weapons, but it cannot erase the sounds of music and the power it holds throughout history.

For a lot of us, when we think of jazz the first image that comes to mind is probably isn’t related to protest or politics but rather something closer to a swanky jazz bar with folks sipping fancy martinis. But the reality is, musicians like Charlie Parker weren’t able to get a cabaret card that allows musicians to perform in venues. Billie Holiday almost didn’t record “Strange Fruit” because of the negative reactions from Southern record retailers and rejection from CBS radio network. The history of jazz is messy, loud, political, and nuclear.