“For every action, there is an equal and opposite reaction.” Newton changed the world when,  in 1687, he wrote his Third Law of Motion. Although Newton’s law was focusing on the world of physics, his insights can be applied to the development of nuclear weapons in other countries as a reaction to the United States’ nuclear arsenal. 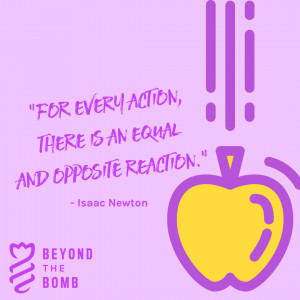 In 1945, the U.S. carried out the first-ever nuclear explosion when they tested an atomic bomb at the Trinity Test Site in New Mexico. Only three weeks later, they dropped an atomic bomb on the city of Hiroshima, followed by the bombing of Nagasaki.

Four years later, in 1949, the Soviet Union conducted its first detonation of a nuclear weapon. They had started a small-scale nuclear research program in the early 1940s, but the project only gained greater importance after the United States demonstrated its nuclear capability. During the Cold War, the United States and Russia engaged in a nuclear arms race, both building huge stockpiles of nuclear weapons. Both countries claimed to be doing this to maintain a “balance” between two superpowers.

Other nations started to get involved as well. In 1952, the United Kingdom launched its first nuclear test in Australia. In the 1960s, France, China, and Israel began conducting nuclear tests, followed by India (1974), Pakistan (1998), and North Korea (2006). Countries have argued they develop new weapons to pursue a power balance. However, as long as nuclear weapons exist, this leads to a false sense of security. The balance of power is an illusion.

The nuclear arms race has led to an estimated total of 13,355 nuclear weapons possessed by nine countries in 2020. The United States and Russia possess 92 percent of these weapons.  How can we work towards a world without a threat of nuclear war?

Countries have argued they develop new weapons to pursue a power balance. However, as long as nuclear weapons exist, this leads to a false sense of security.