King of the Metaphors?

Part of me wishes I could still look at the Godzilla movies, and continue to see the brainless giant monster beat-em-up flicks I saw as a kid. There’s more than enough of that dumb, fun kaiju on kaiju action still there; let’s be honest, Godzilla vs. Kong (2021) ultimately boils down to a big lizard and a big monkey punching each other until — spoilers! —  a big robo-lizard also appears on the scene. It’s gratuitously excessive destruction, explosions and ruined cities and all, but to my (proverbial) reptile brain, it’ll always have an undeniable appeal.

But the glee of watching ginormous beasts beat the crap out of each other belies the much darker, more somber genesis of Godzilla. When “Gojira” debuted in Japanese theaters 1954, audiences emerged weeping.

America has forgotten that the monster’s origins are political, and more specifically, immediately anti-nuclear in nature. The creature was born in a time when Japanese citizens were still processing the utter annihilation of Nagasaki and Hiroshima, still processing the tens of thousands of lives lost instantly, in a moment where American occupation meant artists and creators faced strict censorship. Gojira was a creative path around such restrictions.

The original Gojira was an innocent survivor of the K-T extinction, the prehistoric meteor strike that marked the last time a calamitous force caused an apocalyptic event. After the U.S. tested a nuclear weapon in the Pacific however, the reptile found itself injured, dazed, and enraged. The beast proceeded to raze the city of Tokyo — and everyone in it — to the ground.

Breathing fiery atomic breath and covered in keloid scars reminiscent of irradiated Japanese citizens, Gojira represented both the victims of the nuclear holocaust, and the weapon itself. The violence throughout was brutal and senseless, upsetting and genuinely horrifying. Ending on a quieter note, the film sees a scientist create a new superweapon (the “Oxygen Destroyer!”) capable of defeating Gojira; he sacrifices himself in the process of killing the monster, praying the secret to building such weapons of mass destruction will die with him. 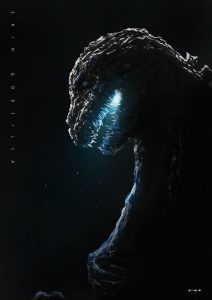 Regardless of one’s opinion on the dropping of two nuclear weapons — one after another in immediate succession — on civilians, it’s plain to see Gojira offered a meditation on the morality of such cataclysmic power. Gojira was, at the very least, a means of coping and educating citizens during censored times, if not a direct rebuke to the American military’s hubris and aggression.

Frustratingly, when Godzilla: King of the Monsters (1956) came to American theaters a few short years later, American film producers — in typical Hollywood fashion — proceeded to whitewash the film and scrub it of all its anti-nuclear messaging. Suddenly starring 50’s darling Raymond Burr, the new film completely stripped scenes linking Godzilla to nuclear war. It was the first iteration of this silly, simplified Godzilla, and a far cry from the original.

After several decades of intermittent reboots following this trend, Legendary Entertainment’s Godzilla (2014) marked the launch of their big budget “Monsterverse”…and the continuation of an Americanized, whitewashed Godzilla. A long way from the message of the original, the movie actually made nuclear weapons a good thing, a tool to lure humongous “Titans” away from population centers — ironically, a means of actually protecting cities.

Its sequel, Godzilla: King of the Monsters (2019) attempted to pay homage to the original in some regards, including elements like the “Oxygen Destroyer” and a self-sacrificial Japanese scientist.

In the same breath, Legendary transformed what was once a towering critique of nuclear weaponry and American belligerence into essentially the sixth branch of the U.S. military. After featuring battles with ecoterrorists and electric space hydras for the duration of the film, with the U.S. and Godzilla basically on the same side, the climactic final monster showdown opens with one of the characters heroically declaring, “This time, we join the fight.”

The ensuing brawl sees Godzilla and his symbiotic partner Mothra tag team against evil flying Ghidorah and Rodan, all while U.S. ground forces conduct rescue operations, cruisers launch a naval bombardment, and aerial squadrons provide air support for the good guys. The scene culminates with an over-radiated Godzilla “going thermonuclear,” defeating his enemies and preventing them from terraforming/destroying the entire planet.

I thought it was a pretty awesome cinematic moment; it definitely gave 17-year-old me a wave of fanboy chills when I saw it in theaters. Only looking back do I realize it was also pro-nuke, pro-military propaganda.

The very concept of a nuclear explosion saving the world from total annihilation is honestly laughable, especially when weapons 3000 times more powerful than those used in 1945 are on the table, and mutually assured destruction is all but guaranteed.

67 years ago, if you predicted the walking equivalent of a nuclear red flag would be rescuing humanity with an atomic blast — the American military at his side, no less — it would’ve been satire. Today, it’s entirely unsurprising.

It’s been interesting having to reconcile my enjoyment of these movies with my newfound knowledge that they utterly desecrate the source material. To be fair, the most recent installment of Godzilla vs Kong (2021) seems to have some more nods in the original’s direction (as an aside, Kong’s backstory has its own host of skeletons in the closet).

Godzilla returns to his place as a violent force against humanity. The hulking robot “Mechagodzilla,” a corporate product of the military industrial complex, is ostensibly created to protect humanity; its sudden betrayal of its creators and decision to wreak indiscriminate havoc represents some sort of criticism of manmade super weapons.

Alas, the modern narrative of everyone’s favorite fire-breathing lizard is still wrought with manipulations and mischaracterizations. The twisting of Godzilla parallels the similar romanticization of nuclear weapons themselves: transforming literal planet-killers with no practical purpose beyond soaking up billions in government revenue into symbols of American grandeur, patriotism, and might.

We may not have to live in constant terror of giant monsters decimating our cities and peoples. But we do live in a world where the United States alone could be the first to use a weapon of total annihilation, where one man has sole authority to trigger the end of days with the flip of a switch. And that alone is enough to keep me up all night.

Photo 1: “Shin Godzilla” by NogerChen is licensed under CC BY 2.0