Twitter. The 280 character postmodern microblog hellscape where presidential hopefuls have a direct line of communication to voters to talk about their policy positions AND the place where I follow an account called cakes with threatening auras. More threatening than those horrifying cakes (and some of them are true spawns of Satan), is Joe Biden’s budget proposal. Specifically, the staggering $753 billion dollar defense budget, $44.2 billion of which is allocated to the maintenance and modernization of our nuclear arsenal. So, as the true Twitter junkie I am, I decided to sniff around ole’ Joseph Robinette Biden Jr.’s Twitter to see what his thoughts were regarding military budgets and nuclear policy during the Trump presidency.

This is Joe Biden: Tweets vs. Reality. 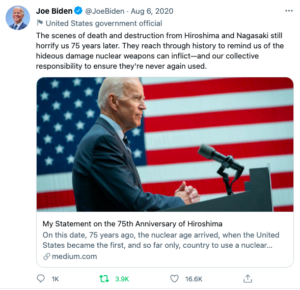 The scenes of death and destruction from Hiroshima and Nagasaki still horrify us 75 years later. They reach through history to remind us of the hideous damage nuclear weapons can inflict—and our collective responsibility to ensure they’re never again used.

[Joe included a link to a Slate article]

On its surface, this tweet is great. The war crimes inflicted by the government of the United States on the people in Hiroshima and Nagasaki is horrifying and fundamentally changed the entire socio-political and economic dynamic in the later half of the twentieth century. In the linked Slate article, in the SECOND paragraph, Joe writes that “For decades, American leaders of both parties have understood that the United States has a national security imperative and a moral responsibility to reduce nuclear threats, including by negotiating treaties and agreements to control and eventually eliminate these weapons.”

This one is almost too easy. If Joe were really interested in eliminating nuclear weapons, how does it make any sense to throw an extra *checks notes* $44.2 billion to the modernization and development of our nuclear arsenal? You don’t get it both ways, Joe. Nuclear war is indeed horrifying, and the first step to pulling ourselves from the brink of it is to defund the arsenal.

Joe did not deliver. ❌

Let’s put this in perspective: if you eliminate every single solitary soldier, tank, satellite, nuclear weapon, eliminate the Pentagon and it would only pay for 4 months of Medicare for All. 4 months.

Where do the other 8 months come from? Your paycheck. #DemDebate

On Twitter, Joe doesn’t have to show his work, like I had to on my standardized math tests in elementary school, so it’s hard to argue specific numbers with him. However, given the cute little #DemDebate, this jab is of course pointed at Sen. Bernie Sanders’ Medicare for All ten year plan, which would have cost $32-$34 trillion. Lindsay Koshgarian, from the Institute for Policy Studies, outlines in a piece for the New York Times that roughly over the past 18 years, the United States has spent $4.9 trillion on meaningless and destabilizing wars, especially in the Middle East. In collaboration with the Poor People’s Campaign, Koshgarian argues that more than $300 billion annually could be cut from the military budget in a plan that puts American’s ahead of the funding of nuclear weapons and endless wars. This $300 billion cut, in conjunction with the fair taxation of the upper class and corporations and the ending of mass incarceration, would result in enough money to fund the social programs and infrastructure that should be afforded to every American (and person in general), including Medicare for All. The ultra-rich in this country have exorbitant amounts of wealth (another account I follow Has Jeff Bezoz Decided to End World Hunger? in which a daily tweet reads: Jeff Bezoz has decided he will not end world hunger today) that continues to be untaxed while the working class shoulders the tax burden.

Thus, in conclusion, we can smile. Joe did, in fact, deliver on his tweet-promise to continue to fund a bloated military budget at the expense of the health of Americans, during a global health crisis! Woo! 🎉🎉

Oh Twitter. You beautiful horrible place, you. If politicians are going to use you to make promises, we’re going to hold them accountable. And you, dear reader, I hope will follow @BeyondtheBomb on Twitter and visit our website to learn how you can get involved in holding Joe accountable to his promises to us. Nuclear policy is not just about the old white men in charge, it’s about all of us, and our futures, and the budget should reflect this reality. And I hope you follow me, @CalvinRyerse, for more great content! Now excuse me as I go outside and get some sun, I simply can not stare at that little blue bird for another moment.

Want to read more? A bonus tweet will be included in the next edition of Beyond the Bomb Zine’s Silo!