Maria Diaz-Islas is a student at the University of Connecticut pursuing Psychological Sciences and Women’s, Gender, and Sexuality Studies. She is driven by intersectional activism and brings her passion to her work as a Spring 2020 Fellow with Beyond the Bomb.

When we think of nuclear policy, in many instances our minds gravitate towards abled, straight, cisgender, typically conservative, white men. These are the same people involved in making most legislative decisions, including those regarding women’s bodies. As a progressive Latina woman working against nuclear violence, I challenge the notion that people who don’t fit that mold can’t make a difference when it comes to these issues.

I was a first-year student in college the first time I heard the term “intersectionality,” a word that opened my mind to a whole new world of how all the issues we face as a society intertwine with one another! But the picture that gets painted through that lens isn’t always so exciting or rosy.

Nuclear policy is riddled with patriarchal values, utilizing toxic masculinity, phallic language, and a dismissive attitude towards emotional factors. Rarely do the people in charge of making these decisions consider traditionally “feminine” concerns, such as the loss of life a nuclear strike would cause immediately as well as over time.

So let’s talk about it. 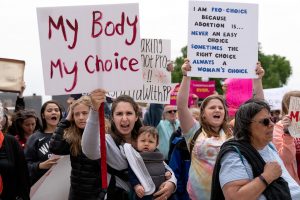 Women are disproportionately impacted by the radiation from a nuclear strike. Not only are they more likely to develop cancers than men are, but Dan Diamond also explains in a January 2020 Politico article that “horrifying birth defects last decades.” Such complications are extremely common and include malformations, stillbirths, and “jellyfish babies,” described in a November 2019 Bulletin of the Atomic Scientists article by Lilly Adams as “babies born without bones and with transparent skin.” All of this translates to an increase in maternal and infant mortality rates, and these consequences last generations after bombs detonate.

How is it that those in power can claim that being pro-life has everything to do with a God-given right to life while being so willing to allow so much death? How is it that people who support taking money out of domestic programs and funneling it into military spending without batting an eye can claim to care about the health of unborn children, but not ones already living? Why does this system, our system, not care about us?

I turn to Judith Thomson’s philosophical essay, A Defense of Abortion, where she points out that, to someone who opposes abortion, it is “preferable” to let someone die (deny a person with a uterus the right to an abortion that could save their life) than to directly cause that death (allow an abortion that would kill a fetus who, in this argument, has a right to life). However, the idea that either of these lives truly matter to people in power is obliterated by the fact that our national priorities lie in spending money on nuclear weapons programs specifically designed to prepare for launching nuclear strikes. Neither the person with the uterus nor the fetus (nor any innocent person in the situation) are seen to have a right to life in this case.

Let that sink in.

Furthermore, a nuclear war would have severe environmental consequences. Not only would radiation impact our planet, but a nuclear autumn or winter would result in food shortages and starvation for people all over the world (yes, that includes the U.S.). To deplete ourselves of the resources we need would be foolish and cost us lives that we are still capable of saving.

The defunding of the Centers for Disease Control and Prevention (CDC) as a means of increasing military spending has already inhibited our ability to deal with COVID-19. Though we have been living close to midnight for a long time, we are all now being affected in the present. What is revealed to those who have been frogs in boiling water now is that this is not a system that prioritizes the people.

But there is still time to jump out.

If you are interested in making a difference, there are steps you can take today, such as signing our petition supporting No First Use, Senator Warren and Representative Smith’s bills that would make it U.S. policy to never launch a nuclear first strike. You can even take it a step further and write or call your representatives, or simply get informed on nuclear policy through sources like this blog and Inkstick, a platform that makes learning about nuclear policy accessible to those who feel it can be intimidating.

The establishment is wrong in assuming that the American people are not ready for a revolution. If anything is being revealed to us now, it’s that the system doesn’t care about us. Now is the time to act.

Rarely do the people in charge of making these decisions consider traditionally “feminine” concerns, such as the loss of life a nuclear strike would cause immediately as well as over time.

Photo #1: “My body my choice sign at a Stop Abortion Bans Rally in St Paul, Minnesota” by Lorie Shaull is licensed under CC BY-SA 2.0

Cover photo: “Pro Choice Rally and March” by Two Branches is licensed under CC BY 2.0.