India v. Pakistan – This potential nuclear conflict is a bigger deal than we think

If you’ve heard anything about the conflict going on between India and Pakistan right now, it was probably cloaked in the reassuring promise that should this war turn nuclear, it would be limited. Limited nuclear war, huh? Like low-yield nuclear weapons, limited nuclear war is an oxymoron. How did this all start, anyway? 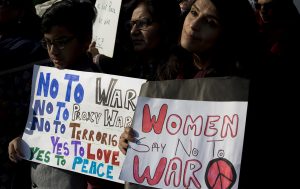 Tension between India and Pakistan over control of the Kashmir region has always been fraught; wars have been fought in 1947, 1965, 1971 and almost again in 1999, despite UN interventions. This most recent crisis arose on February 14 of this year, when a car bombing in Indian-controlled Kashmir killed more than forty Indian troops. Militant group Jaish-e-Mohammed took credit for the suicide bombing, carried out by Adil Ahmed Dar, a 20-year-old from southern Kashmir. The problem with this, is that India believes Pakistan has cultivated these groups of extremists; something Pakistan denies. Nevertheless, India launched airstrikes against Pakistani militant camps the following Tuesday. The results of these strikes are unclear, with India claiming to have killed up to three hundred militants, and Pakistan claiming no one was injured. An isolated air strike is one thing, but given India and Pakistan’s nuclear weapons arsenals, in the one hundred and fifty warhead range, this conflict could escalate quickly.

India has a declared No First Use policy, but Pakistan has been vocally against making a similar commitment. This is due, in part, to India’s substantially larger army and increasing military spending.  After the Indian airstrike in Balakot, Pakistan shut down its commercial airspace, halting flights, and claimed they would have retaliated with jets, but it was too dark. 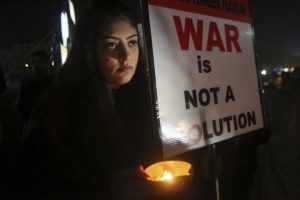 A member of the civil society group, Citizens of Lahore, participates in a candlelit vigil against war, in Lahore, Pakistan, Sunday, March 3, 2019.

Pakistan has been embarrassed by this conflict – embarrassed enough to hint at a nuclear strike. On February 26th, Maj. Gen. Asif Ghafoor stated, “We will surprise you. Wait for that surprise. I said that our response will be different. ” He then convened the Pakistani committee in charge of nuclear strikes.  “You all know what that means,” Ghafoor said of the nuclear commanders’ meeting in a press conference he posted to Twitter.

With China (another No-First-Use nation) backing Pakistan and the U.S. backing India, the question of a nuclear conflict becomes even more complicated. Should the conflict become nuclear, will it remain a ‘limited’ nuclear war, or will allies be forced to intercede? And, even if it did remain limited to two nations, how would the rest of the planet suffer?

A 2014 study by Professor Robock of Rutgers University modeled the consequences of  two countries exchanging fifty nuclear weapons each. The study concluded that five million tons of smoke would be released into the atmosphere, starting a nuclear winter that would last decades. This smoke would rise into the troposphere first, before settling into the stratosphere, spreading around the globe for the next five years. The ozone layer would be decimated, up to 50%, leaving the planet vulnerable to ultraviolet radiation, and temperatures would drop when sunlight is blocked by soot in the stratosphere. This change in global temperature would be cataclysmic for world food supplies, both in agriculture and because the change in sea temperature would devastate ocean life. It would take a projected twenty-five years to return to normal, if we could survive that long. Robock’s research was published in 2014, and while he hasn’t finished research on his new model, he estimates “It could be about five times worse than what we’ve previously calculated.” 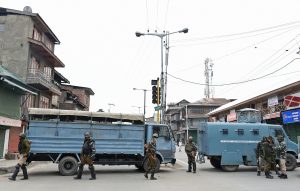 Indian paramilitary troops in Srinagar in Kashmir this month.

For now, we wait. U.S. Secretary of State Pompeo sounded optimistic after speaking with leaders of both nations last week. “I had good conversations, and I am hopeful that we can take down the tension there, at least for the time being, so they can begin to have conversations that don’t portend risk of escalation to either of the two countries. So we’re working hard on that,” Pompeo said. Similarly, Pakistani citizens are not looking out for an imminent nuclear strike. “The core objective is to get international attention,” said Sadia Tasleem, a professor of defense studies at Quaid-i-Azam University in Islamabad. “It’s about sending a signal that this option is being considered.” A signal the entire world should be concerned about.