In Loving Memory of the INF Treaty: Gone But Never Forgotten

On August 2, 2019, the Intermediate-Range Nuclear Forces (INF) Treaty passed away at the age of 32 after a long battle with a debilitating disease known to cause lack of cooperation and tweeting threats of nuclear annihilation — also known as Donald Trump and John Bolton.

INF was born to Ronald Reagan of the United States and Mikhail Gorbachev of the Soviet Union 32 years ago on December 8, 1987. INF, the love child of many years of Soviet-U.S. cooperation, forever changed the course of nuclear arms control. INF’s accomplishments were numerous, including:

“The INF Treaty was at the heart of a new arms control regime created by the Reagan administration that helped lead to the end of the Cold War.” 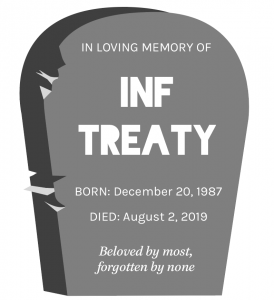 INF is predeceased by other important treaties and agreements on disarmament, arms control, and climate action such as the Anti-Ballistic Missile Treaty, the Iran Deal, and the Paris Climate Agreement. Like INF, these agreements were all plagued by the dreadful illness known as Donald Trump and John Bolton.

INF is survived by New START. With the death of INF, New START is the only limit on the United States’ and Russia’s nuclear arsenals. Special thanks to the Obama administration for prioritizing arms control and disarmament, signing New START within a few years of coming into office. Russia has mourned the death of INF by announcing its readiness to extend New START and make sure it does not meet the same fiery death as INF.

In lieu of flowers, contributions may be made to Beyond the Bomb to combat the Trump administration’s careless disdain for international law and diplomacy and advocate for sane nuclear policies like No First Use. On what would be INF’s 32nd birthday, condolences may be sent to the White House to demand an extension of New START.