It’s no accident that the Universal Declaration of Human Rights (UDHR) was signed in 1948, just three years after the Holocaust and the nuclear devastation in Hiroshima and Nagasaki. The fight for a common set of values and language to define how we treat each other has a long, winding history from before the days of the Magna Carta. But, the scale of the destruction and suffering caused by the Holocaust and the atomic bombs at the end of World War II demanded an urgent and global response. The UDHR represents the importance of the intersectionality of Beyond the Bomb’s work; the threat of nuclear violence undermines the very rights outlined in this important document. 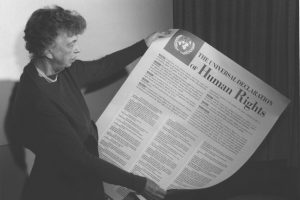 It was also no accident that one of the most vocal advocates for the UDHR was a woman – Eleanor Roosevelt. The document represented an aspirational paradigm shift in international relations away from relationships driven by fear and rivalry to those driven by cooperation and mutual respect. While this emphasis on cooperation  hasn’t always worked out, the transformation of the global stage based on the UDHR is undeniable. And, women warriors for peace and justice have been and continue to be at the forefront of that paradigm shift.

If you aren’t familiar with the UDHR, I highly recommend you take the opportunity of its 70th birthday today to give it a read. So many of the major fights of our time for social justice and the environment find roots in this document – it goes far beyond the confines of what we think of as “human rights” today. From Standing Rock protesters being pepper sprayed and arrested to the Trump administration separating children from their families at our border, the core argument against these terrible government actions is that they are violations of our human rights as outlined in the UDHR.  And, while work to reverse climate change goes far beyond the impact on humans, some of the central arguments which are leading the fight have their roots in universal rights such as Article 3’s “life, liberty, and security of person” and Article 22’s “Everyone, as a member of society, has the right to … the economic, social and cultural rights indispensable for his dignity and free development of his personality.”

The UDHR is a document for ALL people that has been translated into over 500 languages and transformed into children’s books, posters, films, and artwork. And, for Beyond the Bomb, it is in many ways the foundational document laying out the critical intersectionality of our various fights for justice and reform. We work to prevent nuclear war because we believe that a nuclear weapon deployed anywhere in the world will cause irreparable harm to our rights to assembly and the strength of our movements for social and environmental justice. 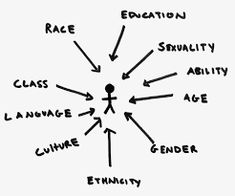 This Human Rights Day, we invite you to join us in putting the #FutureFirst by supporting #NoFirstUse.

We work to prevent nuclear war because we believe that a nuclear weapon deployed anywhere in the world will cause irreparable harm to our rights to assembly and the strength of our movements for social and environmental justice.