Hope As A Powerful Tool for Organizing

Sarah Vamvounis is a #FutureFirst fellow and a junior at Michigan State University studying English, History, and LGTBQ Studies. She’s passionate about the environment, human rights, and small diners that serve baklava.

I tend to give the same pitch: “Hi, my name is Sarah. I work with an organization called Beyond the Bomb, our goal is to prevent nuclear war. It’s incredibly low-stress and I have no existential dread.” Every once in a while it gets a laugh. About as often, I get another response: resignation, reluctance, a side-eye that seems to ask, what are you doing wasting your time? Nuclear policy, my supportive but indignant friends tell me, is a room full of powerful white men who don’t care about my life anyway, and nuclear war itself, is an inescapable reality that I can’t influence. In response, I smile. It’s a bright smile, I try not to look like a lunatic, I try to say: Look at me. Look. I’m smiling into the face of nuclear winter and So Can You!

I’m not a human beam of sunshine. I tend to be a pessimist, but I firmly believe in the power of people to organize, apply pressure, create change. I know it’s cheesy but hear me out: hope is the bread that feeds activism. Once people believe that their reality is something they can influence, people move to reshape the world. Hope begets revolutions. 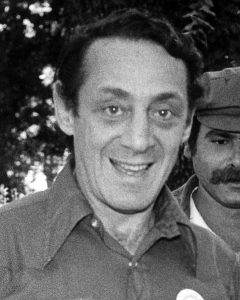 Hope is a powerful tool around which people can organize. Hope can build coalitions, it spans across differences and unites diverse people. Harvey Milk, an activist who became one of the first openly gay American politicians, built his campaign around hope. He used hope to unite people of color, LGBTQ people, the elderly, oppressed people everywhere. His strength as a leader came from his ability to inspire hope in multiple oppressed communities; he represented the promise of a better future, a future that the people themselves could shape. His campaign gave “hope to a nation that has given up, because if a gay person makes it, the doors are open to everyone.” He recognized hope as an essential part of his campaign, hope as an impetus to mobilize.

Hope measurably changes people’s behavior. A 2011 study found that higher degrees of hopefulness in adolescents is associated with less violent behaviors. Once adolescents can imagine an attainable positive future, they’re much more likely to work towards that future. On the other hand, hopelessness is associated with more self-destructive behaviors and a disregard for the future. Hopelessness is the oppressor’s tool that works by convincing you not to do anything to challenge existing structures of power. Encouragingly, however, hope can be learned, both through interacting with people and larger environments.

So how do we inspire hope and what do we do with it? We lead by example, we present others with opportunities to get involved. We recognize hope as the starting point, something to get us through the days of hard work and discouragement. The odds are stacked, they always are, but we all have genuine power and the ability to use it, and we become stronger when we come together. We support each other, we take days off when we need a breather. But then we keep going — we sign petitions, call representatives, show up to protests and the polls. And I know, I know. Hope alone can’t fix the world or prevent nuclear war, but as Harvey Milk said, “I know you cannot live on hope alone; but without hope, life is not worth living.”

So here’s my pitch, one more time: Hi, I’m Sarah, I’m a bit of a pessimist and I’m trying to prevent nuclear war. You can help by signing a petition in support of the No First Use Act, which would make it impossible for America to start nuclear war. You can also call your representatives and ask them to support the bill as it moves through the House and the Senate. At the core of it, I want you to take action, but I’m really trying to sell you on hope. I’m pitching you a future that I want you to believe in, and that I want you to take part in.

Hopelessness is the oppressor’s tool that works by convincing you not to do anything to challenge existing structures of power.