“Mankind is confronted with a choice: we must halt the arms race and proceed to disarmament or face annihilation”

Known as “Mr. Disarmament,” Alfonso García Robles was a Nobel Peace Prize winner born in Zamora, Mexico. After the Cuban Missile Crisis, Robles focused his work as a lawyer and diplomat on making Latin America a nuclear-weapons-free-zone, believing that keeping nuclear weapons out of Latin America would prevent the area from becoming involved in conflicts between rival great powers. He was instrumental in the Tlatelolco Agreement, which prohibits the testing, use, manufacture, production, or acquisition by any means whatsoever of any nuclear weapons by Latin American countries party to the treaty.

“At the end of the day, what organizing is about is to hold power accountable, to check power, to check corruption, and to really shepherd in the values that society aspires to be that comes from the grassroots.”

Pam Campos-Palma is a powerhouse organizer and advocate, working to democratize foreign policy and mobilize military veterans. Even before the 2016 election, Campos-Palma was organizing to move U.S. foreign policy left, putting Clinton in the hot seat and establishing Common Defense, a movement of veterans against racism, hate and violence. 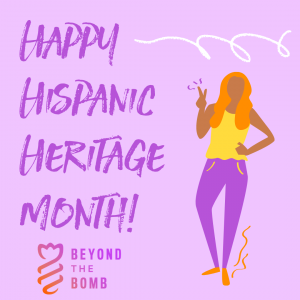 “I want to expose the chains that are keeping us shackled, and I want people to run with it. Everyone’s journey is different, but we all need similar tools to get there.” – Prisca Dorcas, Latina Rebels co-founder

The Latina Rebels Instagram account is an accessible, funny way to stay plugged into the intersection of Latinx life and politics. The account focuses on storytelling, covering topics from the March on Washington to our own Yasmeen Silva breaking down the National Defense Authorization Act. 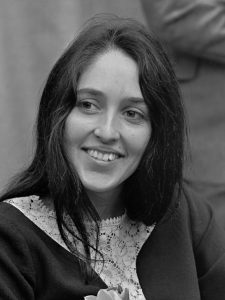 “I went to jail for 11 days for disturbing the peace; I was trying to disturb the war.”

You might know her music, but did you know award-winning singer Joan Baez was also an anti-nuclear activist? An endorser of the nuclear freeze movement of the 1980s, she performed with Springsteen and Jackson Browne at a Central Park nuclear freeze rally in 1982. Baez also founded the Resource Center for Nonviolence (with money she admitted to withholding from her taxes — 60% of her taxes, the amount being spent on defense).

“What brings us together is the ultimate goal of abolishing nuclear weapons. Something we can learn from the COVID pandemic is that we have a number of situations we could face in the future that we can prevent.” 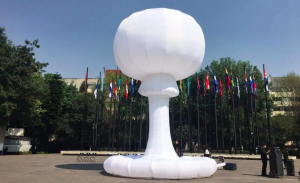 During the 53rd anniversary of the Treaty of Tlateloco, artist Pedro Reyes unveiled his three story inflatable mushroom cloud commissioned to “…raise public awareness, revitalize the once vibrant anti-nuclear community and most importantly put pressure on political leaders, policymakers and global citizens by reminding them of the consequences of inaction.” The art project seeks to illuminate how disconnected many people are from the threat of nuclear war, including our own representatives. You can follow the mushroom cloud’s journey on Instagram.