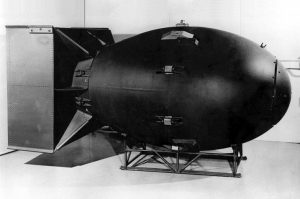 A replica of “Fat Man,” the nuclear bomb dropped on Nagasaki.

On August 6, 1945, the United States detonated an atomic bomb on the Japanese city of Hiroshima, devastating the city. Three days later, on August 9, another bomb was dropped on the city of Nagasaki. The destruction in both of the cities was so severe, you can’t really imagine anything worse, right? But did you know that there are weapons in the US arsenal today that are significantly more powerful than the bombs dropped on Japan?

Destruction at Hiroshima and Nagasaki
The atomic bomb dropped on Hiroshima, known as “Little Boy,” destroyed or damaged more than 90% of the city’s structures and immediately killed tens of thousands of civilians — death estimates actually range from tens of thousands up to 200,000, because it is hard to account for how many actually died from radiation in the days, months, and years after. The death toll and destruction in Hiroshima was particularly high since the bomb was dropped on the center of the city, an area filled with businesses and residences, and the city doesn’t have too many natural features to protect it from the blast.

The bombing of Nagasaki was focused away from the center of the city. Due to this and the hilly geography of Nagasaki, the damage from the “Fat Man” bombing was limited to the Urakami Valley and part of downtown Nagasaki. The city center, harbor, and historic district were protected from the blast. But make no mistake: the bomb’s effects were still horrific, with approximately over 20% of Nagasaki’s buildings being consumed by flames and tens of thousands of civilians dying. Like Hiroshima, it is unclear how many people were killed by the atomic bombing of Nagasaki; the estimated death toll ranges from 40,000 to 90,000, with many dying instantaneously and others dying from long-term effects of burns and radiation. 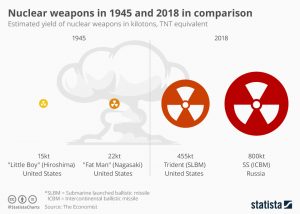 When a nuclear weapon is detonated, it releases energy which is expressed in kilotons of Trinitrotoluene (TNT). Hiroshima’s “Little Boy” bomb is estimated at approximately 15 kilotons of TNT and Nagasaki’s “Fat Man” bomb at 20 kilotons of TNT. One of the warheads in our arsenal, the B83 warhead? This weapon has a yield of 1,200 kilotons. That means that this weapon is 60 times more powerful than Fat Man.

This is why we need No First Use
The Obama administration planned to retire the B83 warhead, but Trump decided to retain the dangerous warhead. With the horrific effects that Little Boy and Fat Man produced, it is hard to imagine what the B83 could do. While everyone should read Hiroshima by John Hersey to take a more in-depth look at survivors’ accounts, let’s look at the effects of Little Boy and Fat Man:
-Survivors suffered radiation poisoning, short-term symptoms such as severe burns and hair loss and long-term psychological effects like post-traumatic stress disorder;
-Those within the vicinity of the bombings were at increased risk of leukemia, cataracts, and malignant tumors;
-90% of medical staff in both cities were either killed or disabled;
-Those born to survivors or those living in Hiroshima for many years to come had increased chances of developing smaller brains, delayed development, blindness, and increased susceptibility to cancer.

Can you imagine anything worse than those effects?

With Trump having sole authority to launch a nuclear first strike, there is a real chance that the B83 could be utilized. As we continue the fight for No First Use, we must always remember the horror that happened in Japan in 1945, and keep in mind what a repeat of this with more powerful weapons could mean. Take action with us for No First Use here.

But make no mistake: the bomb’s effects were still horrific, with approximately over 20% of Nagasaki’s buildings being consumed by flames and tens of thousands of civilians dying.