Like others in their early 20’s, I often fixate on the many ways humans as a whole are fucked. Especially when thinking about the fast approaching doomsday deadline (it’s about 7 years) to zero emissions, we are capital “F” fucked. In educating myself about climate change, the United States’ role in driving carbon dioxide emissions as the world’s second worst polluter is clear. The threats from rising global temperatures and increasing natural disasters are common knowledge, granted you believe in climate science. However, the average person may not know about the U.S.’ role in another threat facing the planet, the nuclear arms race. 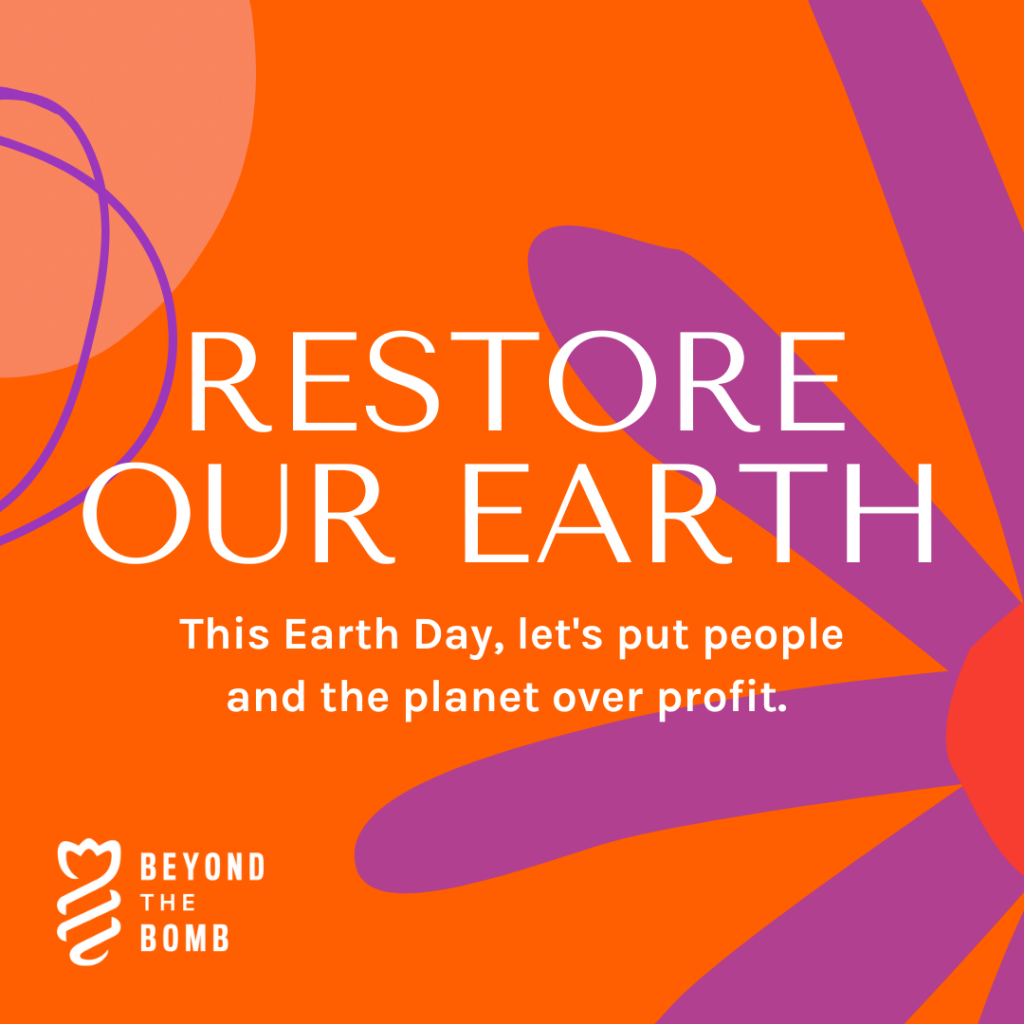 I knew about the Manhattan Project, I learned about the Cuban Missile Crisis in school, but my prior knowledge stopped there. It was shocking to discover the depth of violence that the U.S. has perpetrated on the world in the pursuit of nuclear war power. Natural disasters accelerated by climate change, and the environmental degradation caused by nuclear weapons both disproportionately impact marginalized communities of color nationwide and abroad. The by-product of the production of nuclear weapons, transuranic waste, (classified as low-level waste, yet it’s still highly radioactive) has a catastrophic impact on the surrounding environment. For example, plutonium-239 will take 24,000 years to decay. But more than that, the radiation exposure from the waste, tests, and mining harm human health.

Uranium mines and waste storage sites were often situated on Native lands with at least 500 abandoned mines located in the Navajo Nation. The radiation exposure caused cancer rates among the Navajo to double from the 1970s to the 1990s, contaminated their water supplies, and continues to generate severe health consequences, “a 2015 study found that about 85 percent of Diné [Navajo] homes are still contaminated with uranium.”

The devastating intersections between the threat of climate change and nuclear weapons are the clearest at the Runit Dome in the Marshall Islands.

The nuclear weapons tests administered by the U.S. government from 1946-1958 left the atolls Rongelap, Enewetak, Bikini and Utirik completely uninhabitable. In 2019, researchers found that the soil from the test sites contained radiation levels surpassing that of Chernobyl and Fukushima nuclear power plants, some reaching 1,000 times higher. The Castle Bravo bomb, detonated on March 1st, 1946 on the Bikini Atoll, was the largest thermonuclear device ever discharged by the U.S. government. 1,000 times more powerful than the atomic bombs dropped on Hiroshima and Nagasaki, miscalculations about Castle Bravo’s detonation yield also led to the largest U.S. nuclear contamination accident at the time. Efforts to contain the spread of radiation and re-inhabit the atolls led to the creation of a temporary holding facility in 1977, the Runit Dome aka the nuclear coffin, on the Enewetak Atoll.

The devastating intersections between the threat of climate change and nuclear weapons are the clearest at the Runit Dome in the Marshall Islands. 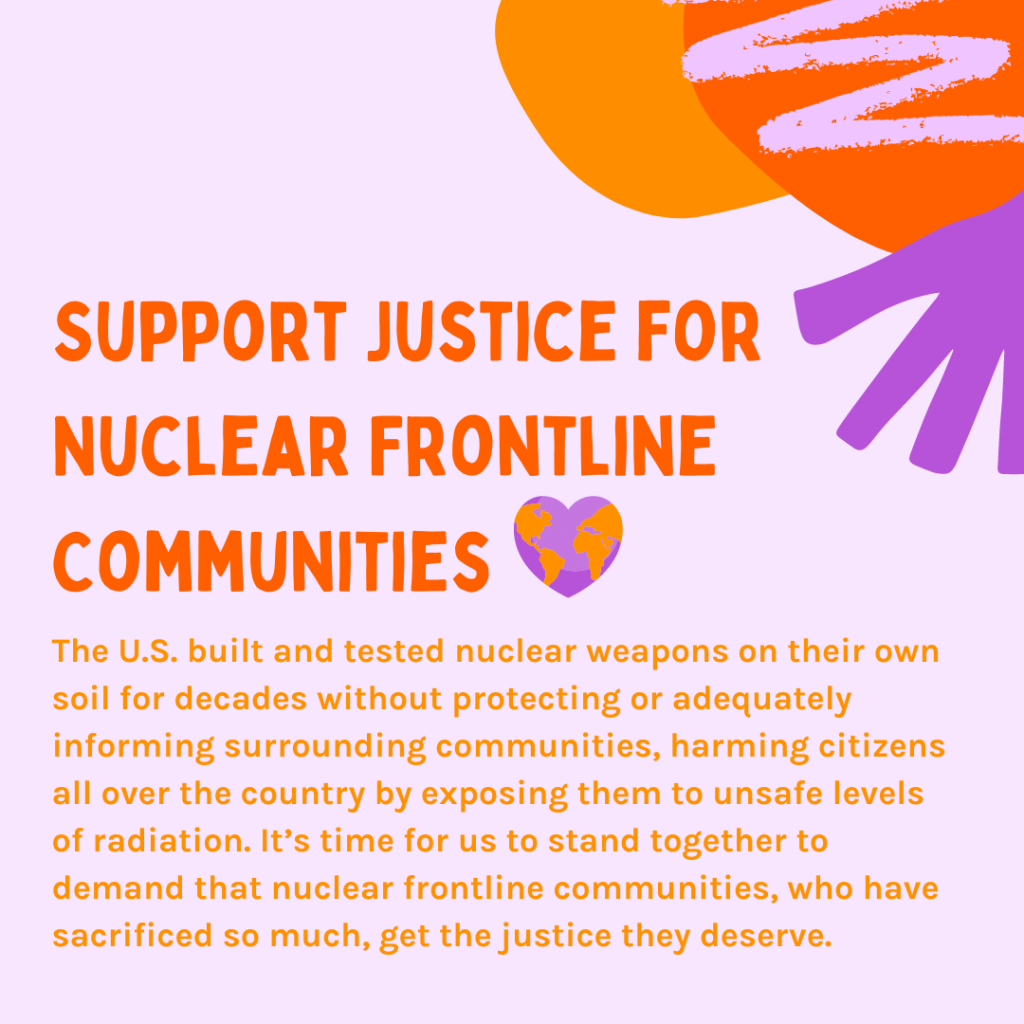 The 18-inch thick concrete dome, locally known as “the Tomb,” houses over 100,000 cubic yards of radioactive debris and 130 tons of radioactive soil from a Nevada test site (unbeknownst to the Marshallese at the time). It’s a living scar of the Cold War, an ugly reminder of how generations of Marshallese people have had to suffer for U.S. security. While it’s been documented that the coffin has been leaking nuclear waste into the Pacific Ocean for years now, experts assure that the threat is relatively low. Climate change could change that.

Rising sea levels and glacier melt could collapse the dome as tides advance higher every year. The Marshallese government has called on the U.S. to prevent this ecological catastrophe, only to be denied. According to U.S. officials, since Runit Dome is on Marshallese land, it’s their responsibility. This lack of ownership for the enduring problems facing the Marshall Islands parallels a similar lack of responsibility from industrialized nations who have contributed the most to climate change. Such dilemmas require collective action, the same man-made systems that created the climate crisis maintain the competition for nuclear arms.

So does the legacy of the U.S.’ nuclear industrial complex speed up the 7-year doomsday timeline? Absolutely. But luckily, we can take action on both of these issues and un-fuck it. It is up to us to prevent the U.S. from creating more weapons and waste, harming already impacted communities, and exacerbating the climate crisis.

Kira Nemeth is currently serving as a Volunteer Coordinator with the Philadelphia branch of the DREAM Program. She brings her extensive youth development experience to help college-aged mentors and their mentees thrive in their relationships. She recently graduated from the University of Vermont with a degree in community and international development and has been an eager volunteer with Beyond the Bomb since October 2020.