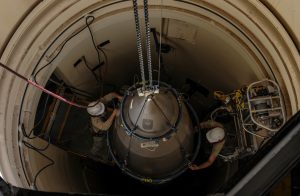 Fifty-one years ago the first Intercontinental Ballistic Missile (ICBM) was successfully tested by the USSR. This changed the nuclear game as we knew it. No longer did nuclear weapons have to be flown by planes to wipe cities off the map — now they could be launched from home without a pilot.

While both the USSR and the U.S. were actively seeking ICBMs, this breakthrough spurred on the Cold War arms race and, as with most war technology, became refined and more dangerous over time. The first generation of ICBMs had to be fueled right before launch. This is a key difference with the ICBMs we have now. Due to advances in fuel, the United States and Russia now have these missiles fueled and ready to go in a policy called “hair trigger alert” meaning that they can be launched at a moment’s notice. What’s more, the standard protocol is to encourage a launch on the first possible warning sign of an incoming attack.

Hair trigger alert opens us up to mistakes and miscalculations that can have catastrophic consequences for people around the world. The stakes are higher nowadays not only because of advances in fuel, but also because of the shorter time it takes the missiles to reach a target and the number of warheads they can carry. With an ICBM being able to travel halfway around the world in under 30 minutes, leaders have a very short window to react to an incoming missile. Coupled with hair trigger alert, this has increased the likelihood that a mistake will be made due to miscalculation such a geese or meteors being mistaken for incoming missiles, as has happened in the past. It was only through sheer luck that people questioned protocol and did not launch  nuclear weapons in retaliation to these perceived threats.

For these reasons people are questioning why we need land-based ICBMs at all. By design, they encourage this adrenaline-fueled decision making that poses suicidal risks. If one country launches a nuclear weapon for whatever reason, the other country will retaliate, wiping out both. Global Zero has put forward an Alternative Nuclear Posture Review that calls for the phasing out of silo-based missiles. This is one important step toward a world without nuclear weapons. Additionally, we need to make sure that these weapons are never used; No First Use coupled with taking weapons off “hair trigger” alert are two key steps to reach this goal.

We need you to help make sure at least one of these steps is accomplished before the fifty-second anniversary of the first ICBM test.