#FutureFirst fellows have been busy focusing on various projects to raise awareness of the threats of nuclear weapons and galvanize activists to take action. Here are the projects they have been working on.

Sarah Vamvounis, a former #FutureFirst Fellow wrote Nuclear Bombshell and pitched it to Beyond the Bomb as an article for our blog! Under the creative direction of #FutureFirst Fellows Calvin Ryerse and Campaign Fellow Raeghn Draper, it turned into what it is today- a short film about the sexualized discourse surrounding nuclear weapons. In a spirit of solidarity and collaboration women working in nuclear weapons or other related fields gave voice to it- literally!

It’s production would have not been possible without creative directors Raeghn Draper and Calvin Ryerse or the 28 people who submitted audio recordings to be included in this project!

I’m a nuclear bombshell and I tease an incomprehensible body count. I exude a kind of maturity, a mystery, a fascination. The number of people I can blow, level, push onto their backs is unreal–you’ll think of the numbers not as human lives, but as my conquests. You’ll think only of the big, fatal, climactic BOOM. I constantly tease that climax–I’m worked from diplomatic hand to diplomatic hand, the end result of all this fondling is inevitably, irreparably, the moment where I get off, go off. (Powerful men claim that I won’t go off unless need be, unless they give their approval and permission, but when do those men ever expect or prioritize women getting off? When do men in positions of diplomatic power ever think that they can’t control women’s sexuality?) And I, phallically shaped, am the nucleus of their power fantasy.

I’m a nuclear bombshell and you wouldn’t believe the amount of energy and attention I get. Plenty of Americans go hungry, drown in their student debt and medical bills, but I’m funded with billions. Money is no object when it comes to me. It’s mind-blowing how men in the White House prioritize me, flirt with me, see my existence as a testament to their own (toxic) masculinity. I’m a woman (really an object, but linguistically attributed with sex and sexuality) waiting to go off. I’m around and arousing, threateningly lurking in the shadows until the moment Trump pushes my button, and somewhere else in the world I am coming to enact reckless, cataclysmic destruction. The terror I provoke is absolved by an assumed control (I have no mind of my own except for all those broken arrows).

I am an agent of male violence with no real personal agency. Men in national security can’t get enough of me, they all want their hands on me, they compete to claim the largest arsenal. I’m like a trophy wife to career politicians, or maybe I’m more of an illicit mistress. Sexual and thrilling, but you’d never take me home or want me genuinely near. While you daydream of getting your hands on me, you’d never feel comfortable with me at your kitchen table, in your backyard, or anywhere around your kids. Still, I get so much American money, and men love to moan about my attributes in explicit detail. The reality of American national security fails the Bechdel test–I’m consistently the only woman in the room, and I can’t even speak.

There is only one kind of approved language surrounding nuclear bombshells like me. In back government rooms, in bunkers, at conventions I’m described in terms of “vertical erector launchers,” “soft lay-downs, “thrust-to-weight ratios” and “deep penetration.” This language defines me, makes me sexy. It is an exertion of masculinist domination that ridicules the person who brings up my human impact. The dominant discourse mocks any argument about people, the environment, and justice as “soft,” “unrealistic,” “unfit for the harsh reality of national security,” and “feminine.” The acceptance of the sexualized discourse relegates the human impact of nuclear bombshells to the periphery, unthinkable and unseen.

And honestly? I’m tired. I’m tired of sitting in silos with men paid to watch me, I’m tired of all the money thrown at me, I’m bored of the men who find me exciting to no end. Maybe it was initially thrilling, but now it feels empty, being programmed to achieve an end that (backwardly, illogically) my existence is meant to prevent. But still, I have been used before. The climactic BOOM is a horror I’ve seen first-hand, and I don’t want it. I’m a nuclear bombshell sick of being sexualized and abstracted to advance a flawed, masculinist narrative of “progress” and “security.”

If you’d like me to quit weaponizing my sex appeal, then you’ve got to stop making me so sexy. Promote diversity in national security, so that the people making the decisions aren’t all the same white men moaning over me. Because honestly, I’m considered a sexual object, but I’m really only an object. The object of my argument is not to humanize me. But when you look at me, when you talk about me, when you craft policy, you should be thinking about people. I’m a personified bomb, an object with no personality, no sexuality, and no feeling. The sad state of nuclear weapons discourse is that bombs are easier to humanize than the people they are deployed against. My existence and the threat of my use is a human issue. Don’t let the language fool you–I’m a nuclear bombshell and I’m decidedly unsexy.

Thank you to everyone who was involved in the production and creation of Nuclear Bombshell! Read more from Sarah Vamvounis, and her thank you letter in the first edition of our zine Silo: Rebel with a Cause.

Haajrah Gilani and Molly Hurley, who are both former #FutureFirst Fellows worked together to make these 4th of July themed poems. The poems are written by Haajrah with an accompanying painting created by Molly.

There was patriotism in the air tonight. 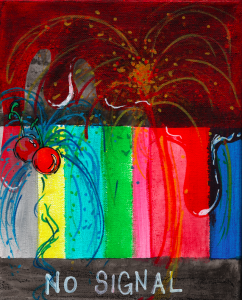 It was the kind that reached beyond sparklers and cherry pies

There was a determination in a faraway land tonight,

To paint the seas red, to turn their faces white, to eliminate the blue skies

Finally, there was peace in the world tonight

While the people of the enemy nation cowered amongst the char and the rubble,

As they wept and scoured the scorched earth for their loved ones,

Don’t whimper and wail for those that had it coming.

Didn’t you hear? This is precisely what they deserved,

For the acts of one, this is the price millions must pay

At long last, our true-blooded ‘Merican justice was served

Make no mistake: this has been burdensome for everyone involved.

But it’s all finished now. Tonight democracy has won,

With our spirit undiminished somehow. Tomorrow, their state of cruelty will know freedom at last.

Every day is July fourth 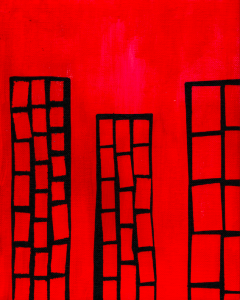 From the land that will market the macabre

And welcome you with a collection of casualties

Just because the civilians understood their rights as human beings

Their rights to exist and to exist in peace. Yet, Philadelphia decided to reclaim the land that was never theirs

And I think of the Fourth of July,

There is no other date that can emulate the beautiful American hypocrisy,

To celebrate freedom when it’s only accessible for a few

The land of the free, the land where you must pay to be free

Our existence is proof enough that we are entitled to more than paying to take up space,

Afraid to leave the house, afraid to stay inside- this isn’t any way of life

Yet, I know we’ll make it 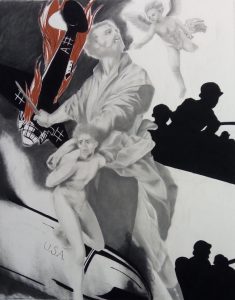 Molly Hurley is a former #FutureFirst Fellow and Fundraising Associate created this image using Conte crayon and graphite on paper.

The work is a twist on Andrea Del Sarto’s renaissance painting of the sacrifice of Isaac. In the Bible, Abraham is told by an angel from God that he must sacrifice his eldest son, Isaac, as a show of his faith to God. Completely distraught, Abraham ultimately decides his faith and love for God is greater than for his son, so he begins to take a knife to Isaac. At the last minute, the angel reappears and stops Abraham, saying that the sacrifice was just a test of Abraham’s loyalty and that he does not actually need to kill his son.
In my retelling of this story, I drew the figures of Abraham, Isaac, and the angel in graphite then replaced Del Sarto’s background with iconography pulled from real World War II US propaganda posters. Instead of a Christian God from the Old Testament, Abraham sacrifices his son to the cause of US supremacy and war. While death and war real and physical for Abraham of the Bible and Abraham of my drawing, God and US supremacy are intangible and debatable. 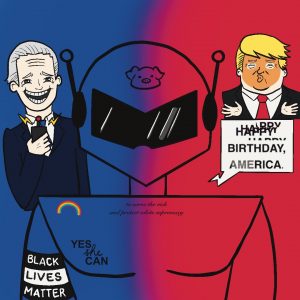 Jackie Waight, a former #FutureFirst Fellow created this image for the 4th of July.

This piece reflects the bipartisan-run society of the US in which both parties are two sides of the same coin in serving white supremacy. The police force is just one aspect where the government attempts to covertly, or openly, turn humans against each other as agents of white supremacy. There is no real celebration of freedom on the 4th of July when all of us who live in America are not free.

Mwandeyi Kamwendo, a former #FutureFirst Fellow, she created this collage, and it was used for the first edition of Beyond the Bomb’s zine Silo: Rebel with a Cause.

I have spent the past few months in Beyond the Bomb’s #FutureFirst Fellowship program, during which we examined the role of nuclear weapons in current systems of inequality. Generally, it is only a matter of time before the things I learn in other areas of my life slip into my artistic practice. “Atomic Holiday (En Vogue)” was no exception. The idea of nuclear war has long terrified me. More recently, I have begun to consider how deeply entwined that possible future is with consumerism, class, and our human ability to look blindly upon what should be a clear and present danger. Starting with the April 2020 issue of Vogue magazine, which had been my companion since the early days of lockdown, I cut and carved out images of opulence and beauty before drowning them in a blue wash. The only woman who survived the cataclysm floats over the figures of a lost world in her paper boat, seemingly unbothered by the mushroom cloud on the horizon. Is she there by choice, a tourist at the end of history? And does she recognize the fragility of her little boat and of her own paper skin?

Radiation and the Body: What Lingers

Rachel Traczyk, who is a former #FutureFirst Fellow and Field Organizer drew these images highlighting the intersectionality of the human body, the environment, and nuclear weapons. 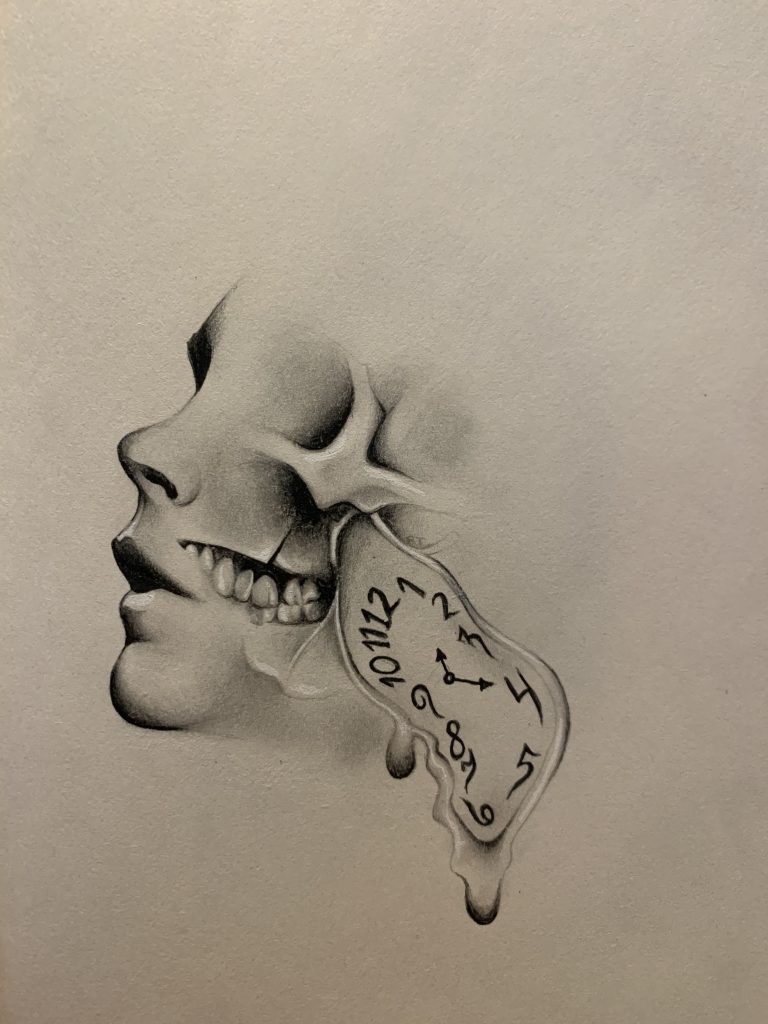 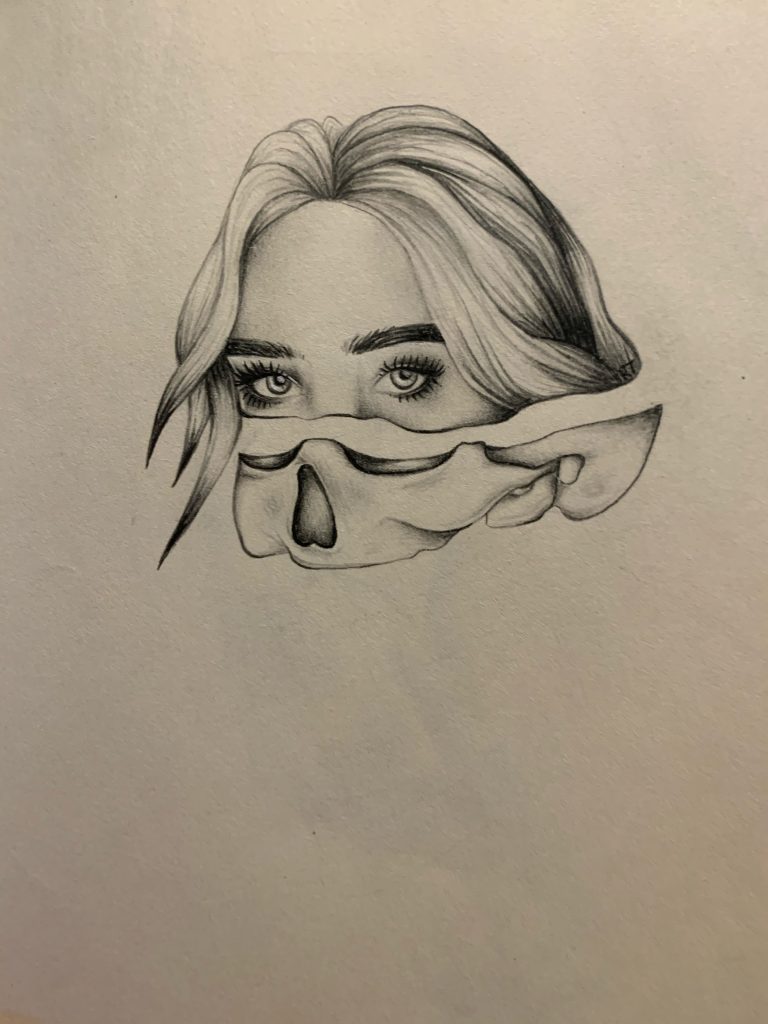 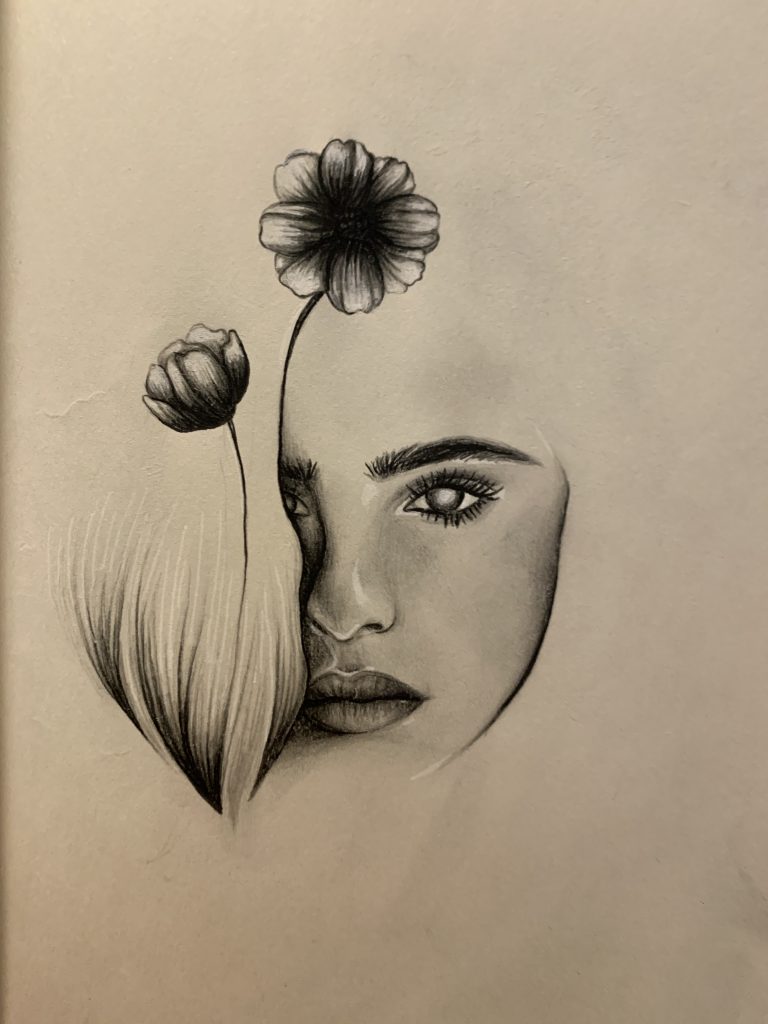 Hawine Eticha produced this short video on the history of France’s nuclear program — focusing specifically on nuclear testing in Algeria and the links between nuclear weapons and colonialism.

To commemorate the 75th anniversaries of the first time nuclear weapons were used in war, Molly Hurley, who is a former #FutureFirst Fellow and Fellowship Associate, painted these for use in graphics and other content for the virtual #StillHere event commemorating the anniversaries. 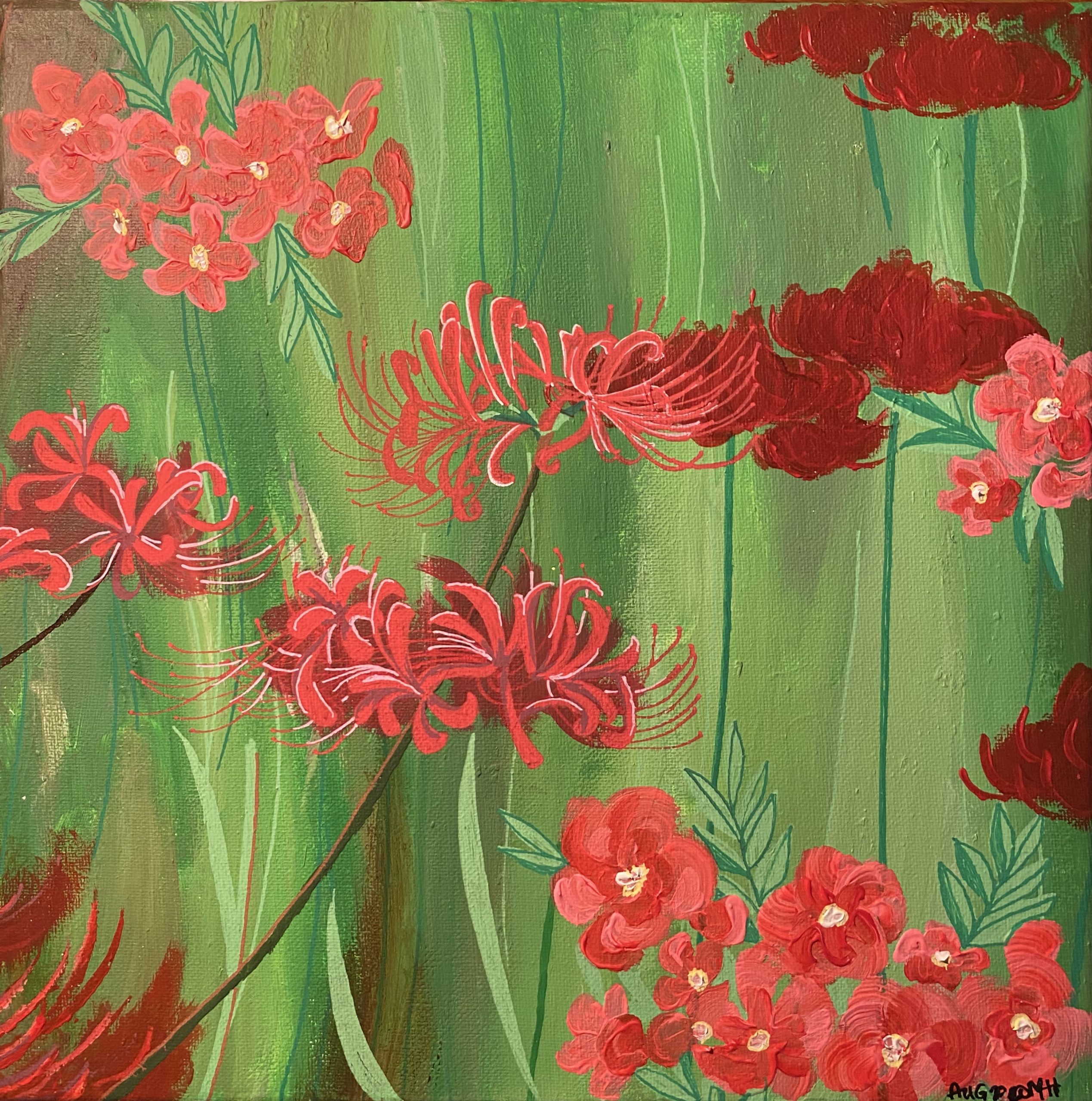 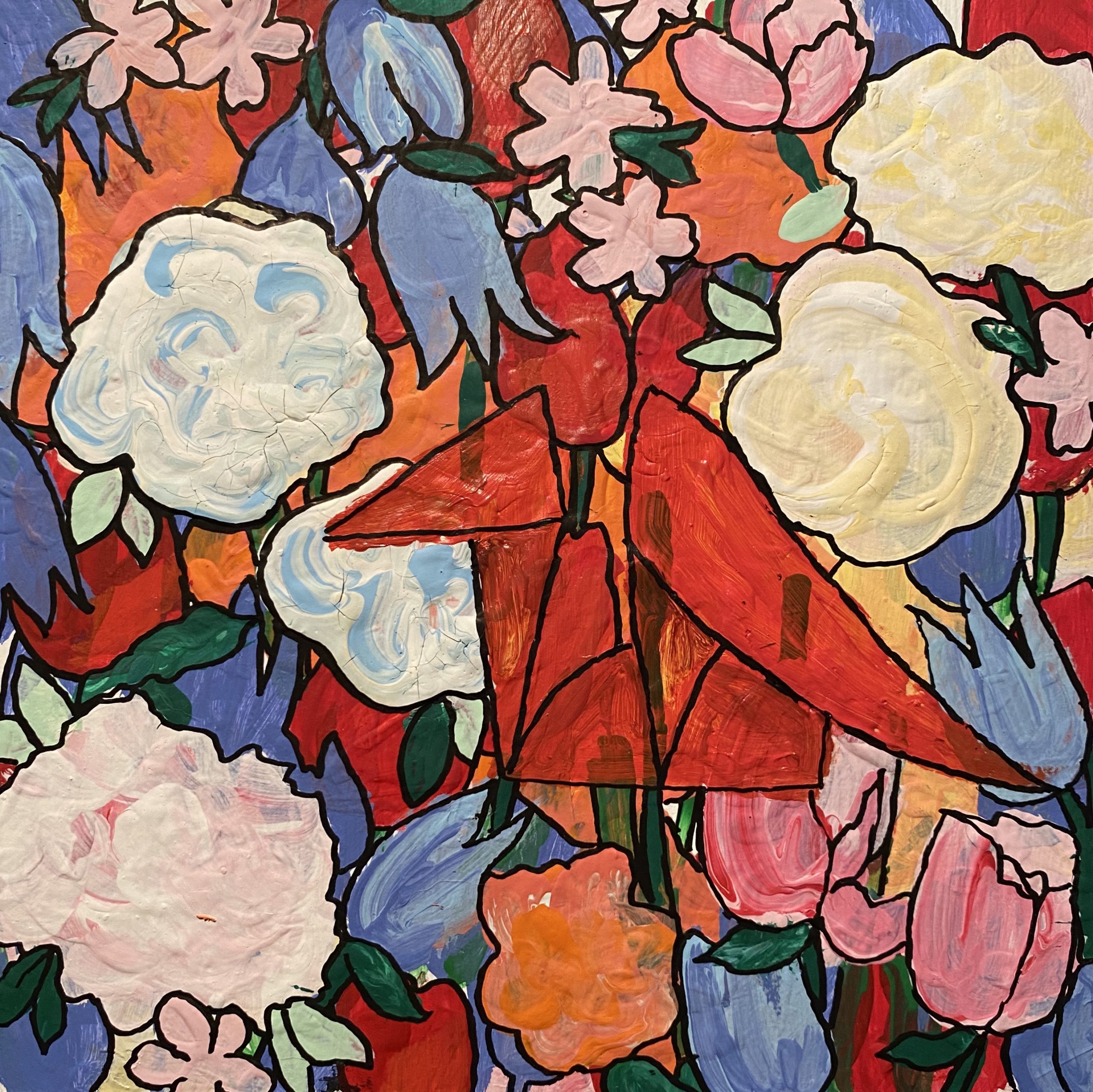 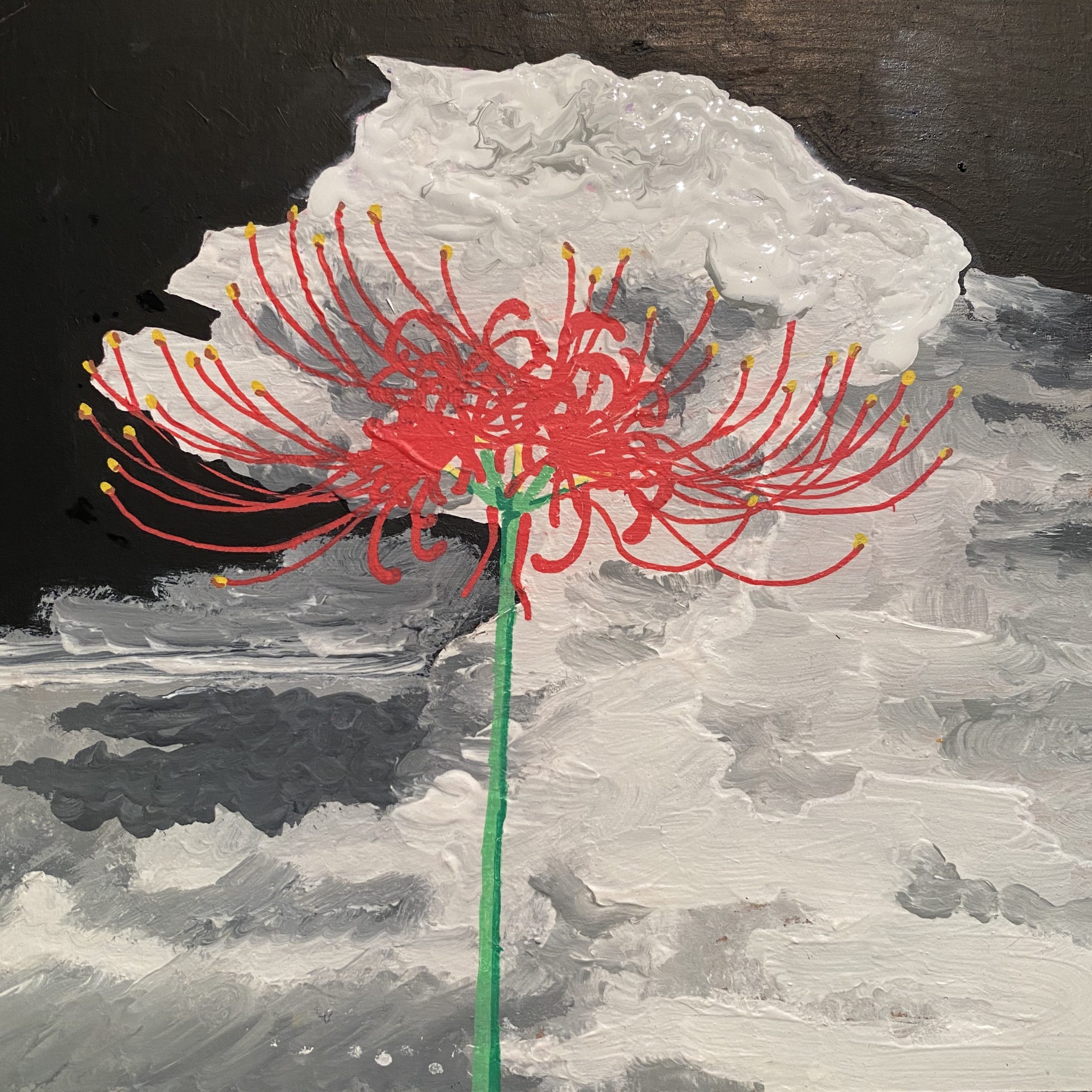 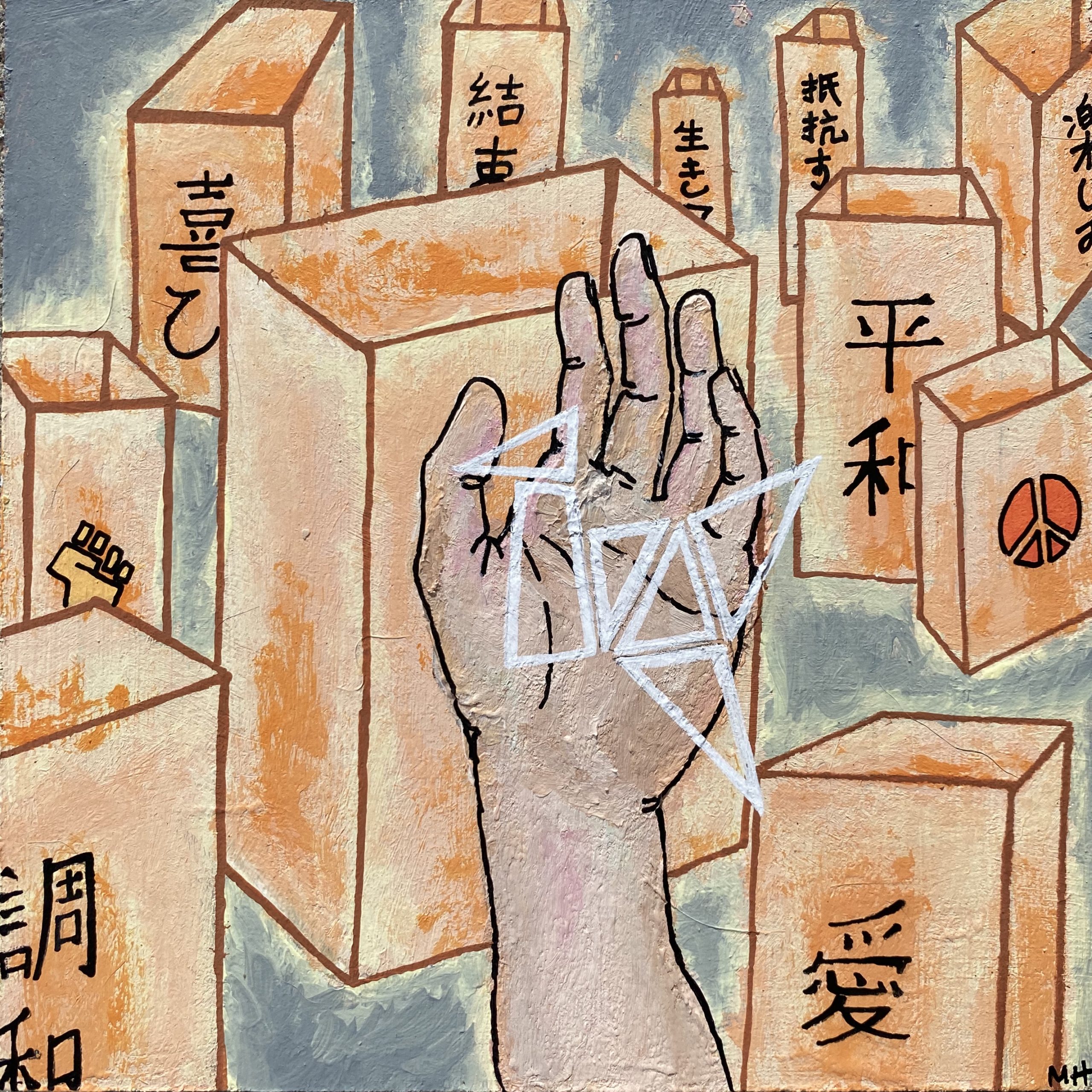 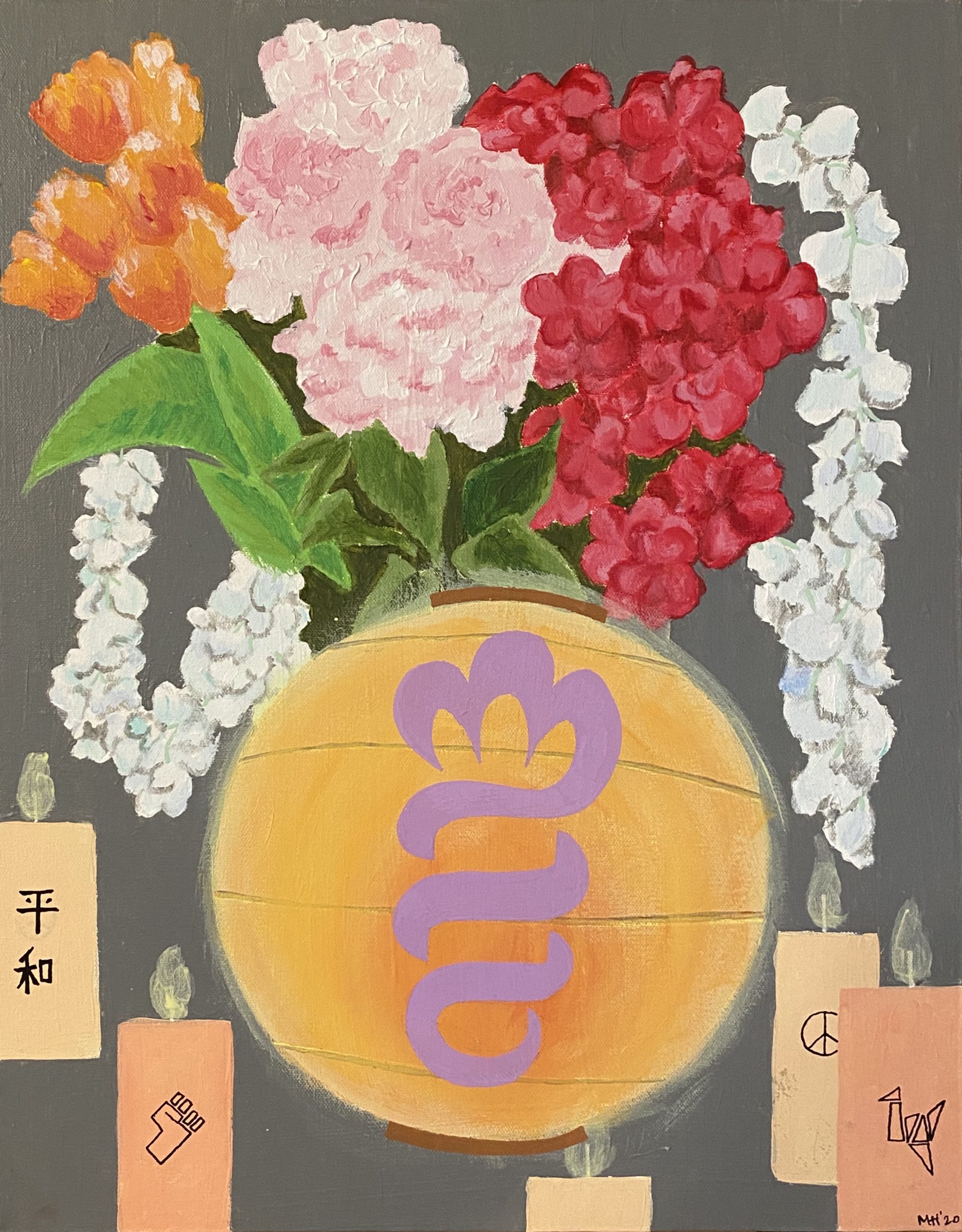 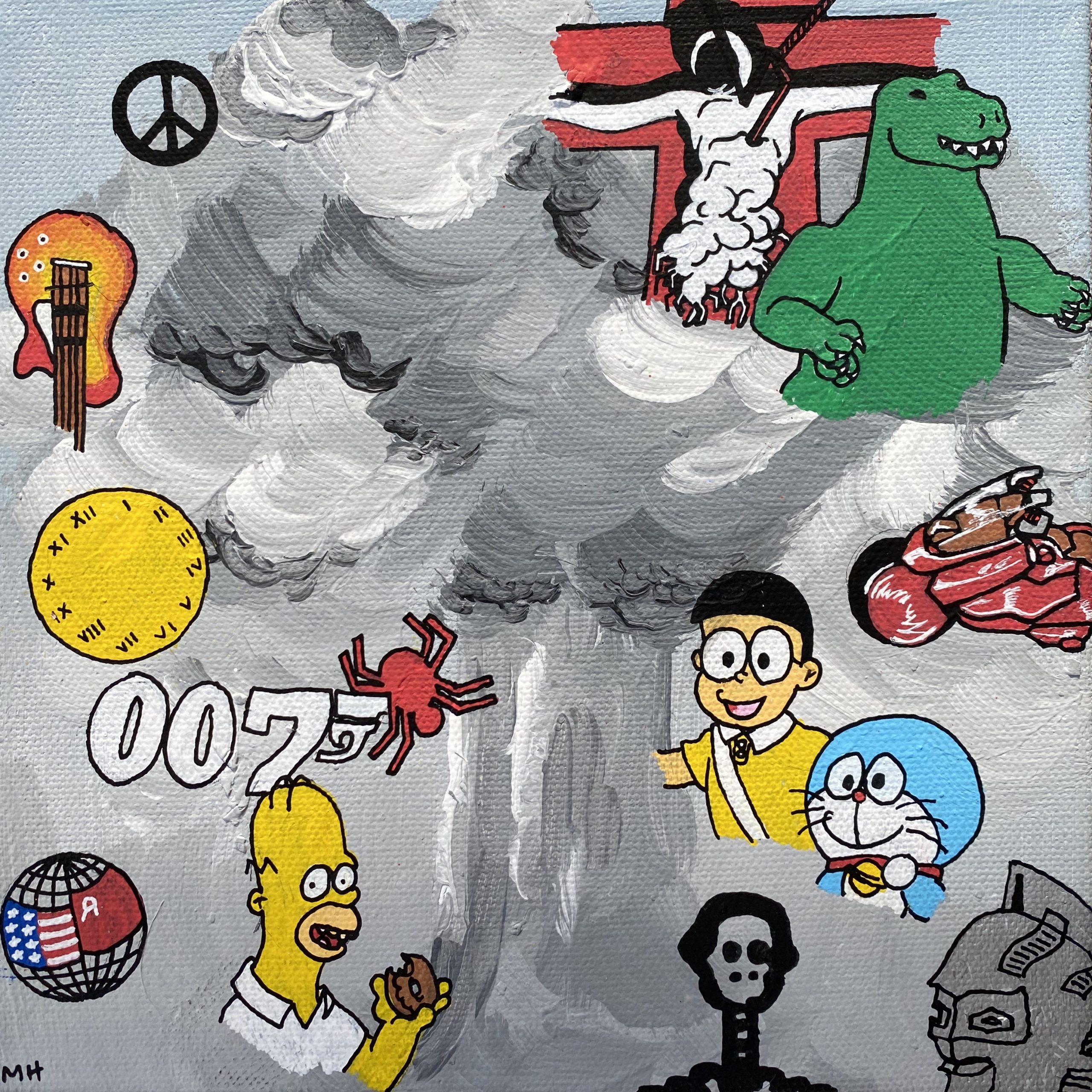