From Obscure to the Obvious

It felt like nuclear war had been a constant topic of discussion for the president, Members of Congress, foreign dignitaries, and the media.  The various key factors have been intensely following developments and current talks with other countries about their nuclear programs.I, like many others, felt this was an obscure problem to be handled by expert military personnel. I assumed my singular voice, even joined with the concerns of many Americans, would go unheard on a global multifaceted issue. However, following the recent Action Lab held in DC by Beyond the Bomb I realized I was already equipped to join the fight alongside other volunteers. 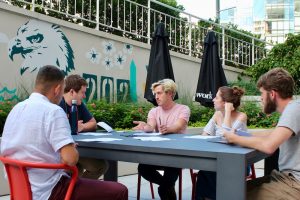 Beyond the Bomb volunteers and staff discussing how to fight nuclear war and weapons in their own communities.

At Action Lab I was introduced to the movement’s push for No First Use – the current main goal of the grassroots campaign. The initiative is as simple as it sounds. The United States would never conduct a nuclear strike first. A stance that has been around for decades and gains attention when global nuclear tensions are high. Given the erratic nature of some of today’s global leaders it was concerning to also learn of the president’s power to unilaterally use nuclear weapons with no checks or balances in place to stop him or her from ending any semblance of normal for communities across the country. Facts such as this often go unknown by the majority of country, but must be addressed and fixed.

Beyond the Bomb is engaging first-time and incumbent candidates to secure commitments of support for NFU. The passion for the cause had a tangible energy throughout the room from field organizers, volunteers, and action leaders alike – coming together from across the country to collaborate on ways to move forward with NFU advocacy and the successes we’d already achieved. However, I was still apprehensive if the American public would grasp that this was a cause they should get behind. All my doubts were erased by the Action Lab sessions by Jessica Sleight, Senior Policy Associate  at Global Zero, and Vincent Intondi, author of African Americans Against the Bomb: Nuclear Weapons, Colonialism, and the Black Freedom Movement,. Jessica Sleight provided more in-depth background on the mishaps and mishandling of nuclear weapons in the past and how we are more susceptible to another nuclear accident occurring now more than ever. While Professor Intondi added more context to the movement’s extended, powerful, and intersectional history. 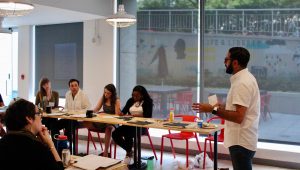 Social Justice legends such as Martin Luther King Jr., Malcolm X, W.E.B Dubois, Langston Hughes, Bayard Rustin, James Baldwin, Coretta Scott-King, and a variety of other social advocacy groups made up of women, athletes, and religious leaders were key in moving not only America, but the world toward a safer and more sustainable future. MLK stated, “What will be the ultimate value of having established social justice in a context where all people, Negro and White, are merely free to face destruction by strontium 90 or atomic war?”

It was when Professor Intondi noted this quote, I realized that no matter the many avenues social justice advocacy may take — from police brutality, food scarcity, climate change, immigration reform, or funding for social and educational programs –it means nothing without a more stable future. For these reasons I joined the fight and reach out to my local representatives and candidates to support No First Use. It is impossible to separate other social justice issues and the use of nuclear weapons without checks and balances.

This fall we are reaching out to Congressional candidates around the country to let them know that this issue is a priority for voters. Make sure our elected are speaking for us on the large stage so we can continue to advocating for the everyday issues of our communities. Join us with a call to your candidate and put our #FutureFirst!