Free our Planet from Nuclear Violence this Thanksgiving

Colonization is “the action or process of settling among and establishing control over the indigenous people of an area” (Oxford Languages). Many of us have become familiar with this word in recent years as the struggles of Indigenous people become more mainstream in campaigns like Land Back, Stop Line 3, and more. The ties between colonization, environmental, and racial justice have been entangled for hundreds of years. Since the first colonizers stepped on this land, a history of theft, exploitation, and genocide has been nonstop. There are zero institutions in the United States not knotted with these realities/issues. Our nuclear weapons system is no different.

Some form of a Thanksgiving celebration has been observed in the United States for hundreds of years. Though the holiday’s original purpose was to celebrate the arrival of English colonizers, it has shifted over the years as an opportune time for sports, gathering with family, and discussing issues like racism and racial justice.

At Beyond the Bomb, our organization’s mission is to free our planet from nuclear violence. Our present nuclear institution would not exist without uranium extraction and nuclear weapons testing on native land and the decimation of indigenous bodies through radioactive poisoning and land destruction. This holiday season, I can’t help but reflect on how intimately this system is tied to the legacy of colonization and genocide and how it continues to uphold these harmful practices, just like Thanksgiving.

Uranium is a weakly radioactive natural metal used in the production of nuclear weapons. Beginning around 1948 to the early 1980s, it became the most prominent mining commodity for both military and civilian uses. Mining this material has significant implications for the surrounding environment through windblown dust and toxic metals, which leak into the atmosphere and water, poisoning people and animals.

Most uranium mining in the United States took place in what is called the Colorado Plateau. This expansive area touches the four corners of what is now called Arizona, Colorado, Utah, and New Mexico; home to the Navajo Nation and once Hopitutskwa, Diné Bikéyah, Pueblos, Núu-agha-tʉvʉ-pʉ̱ (Ute), and more. 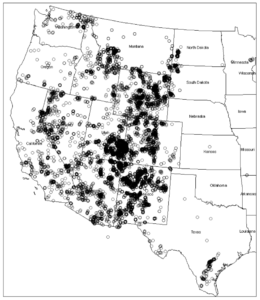 The U.S. government never asked for consent from nearby people to mine, instead continuing to exploit native land and bodies. Many of the miners and local members were never informed of the dangers of radiation. The bodily impact of mining uranium left a majority of workers battling lung cancer. To date, the United States has abandoned over 500 uranium mines. Leaving many of these to continue exposing the local land and communities to radioactive poisoning.

American tradition is to exploit and discard. Between 1951 and 1958, the United States conducted around 100 nuclear weapons tests on what is called the Nevada testing site, land stolen from the Nuwuvi, Newe Segobia, and more. Tests were also conducted in the Pacific Ocean near the Marshall Islands, in Amchitka Island of Alaska, Colorado, Mississippi, and New Mexico. None of these tests were executed with consent from the native people, many of whom continue to fight for reparations for harm caused to their land and bodies.

After colonization and exploitation take effect, lands and people are often left discharged. With most resources extracted frequently, the only thing left is chaos. Nearly 400 sites contain nuclear waste or contaminated material spread across the U.S. There is no solution on what to do with the material or where it should go. Don’t worry; the U.S. government has created material on how to be safe near contaminated materials.

Our nuclear system causes untold amounts of violence towards people and the planet without being used as weapons for war. The majority of those most harmed are low-income minorities. It’s time to retire these relics of destruction, colonization, and genocide and take steps forward that rectify the past.

This history continues in our present. Indigenous communities continue to be decimated through these harmful practices. We may not be able to turn back time, but we can alter the future by educating ourselves and our families and showing solidarity towards impacted communities.

Write a letter to your representatives asking for the expansion and renewal of RECA (The Radiation Exposure Compensation Act, HR 5338 & S 2798). This bill would allow compensation for people exposed to radiation because of nuclear testing and uranium mining, who were never covered in the original bill, and protect for another twenty years. Fill out the box below and join us to impact what will become history.