Donald Trump’s Tank Parade: Or How I Learned to Start Worrying About the Bomb

Every semester Beyond the Bomb is excited to welcome new interns. This is the third in our series of personal essays and blog posts featuring their voices.

This Independence Day, the first I’ve spent in Washington, DC, I thought I would take a stroll through the National Mall to observe the disastrous parade of tanks and military force the media had been talking about for days prior. I was preparing myself to see a despotic show of military might straight out of the history books.

For those who have visited Arlington Cemetery, Ground Zero, or past concentration camps like Dachau, you are probably familiar with the existential sadness left behind by those who perished. With this feeling is an acute understanding of the beaten path of atrocities that lead to these aberrations in history.

I was expecting to have similar feelings while attending a militaristic event that was sure to be one of those steps in the beaten path.

I was hilariously wrong.

All of these existential dreads subsided once I arrived to the “parade.” What I saw were sparse exhibitions of army vehicles and despondent personnel. I later learned of only two tanks on display, both parked by the President’s protected stage that was surrounded by a fence enclosing the space from the Lincoln Memorial to the Washington monument.

Tanks outside of the Lincoln Memorial on July 4, 2019.

It was an especially damp and hot summer afternoon, which was definitely felt by the handful of resiliently enthusiastic attendees. If you had not paid to attend the enclosed space prior to the event (or received a special VIP ticket for Republican donors), you were not likely to even see the arsenal.

For spare moments I wondered where the hysteria came from. This was not the tank parade I had seen in clips out of North Korea or the late Soviet Union. What was everyone so worried about?

In the sweltering heat among the humdrum of parade attendees, I began to understand who this ‘parade’ was actually for.

No, it was not for President Trump’s base of supporters, who traveled far and wide to see promised spectacles of power.

It was not for those in the service forced to attend.

It certainly was not for me.

This last-minute scramble for a mid-twentieth century show of patriotism was not the affair it was promised to be, and it was never meant to be. This parade was intended to be a resounding threat to the rest of the world.

Both of my parents served in the Air Force, so my childhood had its fair share of air shows. Like many families of service members, I have seen all different kinds of planes and arsenal, which is why I recognized the jets that flew over the parade later in the afternoon.

There were F-16s, a single-engine fighter jet meant for aerial combat. The Osprey VTOL aircraft meant for carrying armed service members with its dual tiltrotors. I also recognized the B-2 bomber jet escorted by F-22 fighters. The B-2 is unique because it is a strategic, stealth bomber meant to efficiently navigate through an aerial battle in order to deliver its payload. What is unique about its payload is it was designed to house thermonuclear weapons. Together, these aircraft, used on July 4th as political pawns, cost the American taxpayers $560,000 per hour. 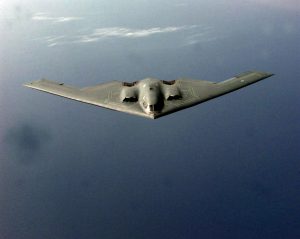 Meanwhile, the House of Representatives has taken measures to halt this administration’s hawkish endeavors. In mid-July they passed their version of the National Defense Authorization Act that adds provisions to check Presidential war-powers while killing Republican efforts to fund “low-yield” W76-2 nuclear missiles whose sole intent is perceivably acceptable use in warfare.

Even after the grueling NDAA markup in the House Armed Services Committee, the whole committee process was upturned by the recent announcement of a White House budget deal accepted by House leadership that will raise spending by $1.4 trillion over the next two years. This deal reverses course on our much needed efforts to scale down hawkish defense spending, as it adds another $5 billion on top of the defense budget. While the budget deal still includes the original NDAA markup, it falls short of addressing our need to radically downsize our Defense spending that allows the executive a blank check on its terrifying war posture.

We are watching with bated breath to see if we will continue diving deeper into debt to underwrite our outreach defense bill. For now, we find some solace that House Armed Services Committee Chair Adam Smith had the good sense to fight to keep funding for new easy fire nukes out of his mark-up. We hope it stays that way.