Dictators love horses, but can they actually ride them?

We interrupt our regularly scheduled (mostly) serious blogging to bring you an update you cannot miss: Kim Jong Un astride a white horse on a snow capped mountain.

I love horses. I always have, and I always will. Imagine my surprise to find that I share this passion with dictators. Horses are amazing, beautiful, powerful animals, and their incorporation into government photo ops can signal everything from power and warmaking, to farming and a prosperous homeland, to displaying culture and traditional sports. From shirtless Russian President Vladimir Putin on a small brown horse to Venezuelan president Nicolás Maduro out in the fields to Kim Jong Un on a large white one, dictators really love to take photos on horses, with varying degrees of proper technique. Is Kim Jong Un a scary man with nuclear weapons? Yes. Is Kim Jong Un an equestrian? Let’s take a look at his recent horseback photoshoot and find out, shall we?

[Disclaimer: I was trained in the United States in the English style of riding with a mostly hunter/jumper background. I understand riding styles vary by region and discipline.] 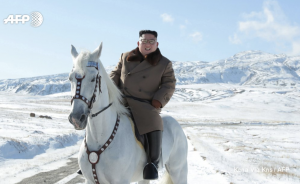 A solid start to this sequence of photos, the horse looks relaxed. Kim has a connection to the horse’s mouth without hauling on the bit (aka, that metal piece in the horse’s mouth). He looks balanced and his horse is standing square. Bully for you Kim, you can successfully sit on a horse! 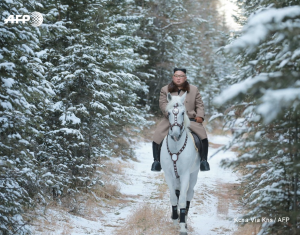 We now see Kim in the first gait, a walk. Notice how he is looking ahead at where he wants the horse to go? Pretty solid form right there. And he has enough control that the horse is going in a straight line and not hugging the treeline. Definitely not unbridled, like Kim’s ambition for his nuclear arsenal. Bonus points because his horse appears to be wearing polo wraps for added support to protect its legs! If only we had treaties to protect us… 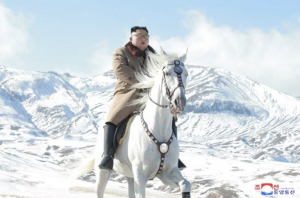 Ahhh, we have picked up some speed now! I hope Kim doesn’t SPUR on nuclear tensions as he just did his horse. Kim still has his eyes ahead, his legs are in the proper position underneath him and his horse is relaxed enough to stick out its tongue (sometimes that may be to escape the bit, but given that he isn’t pulling on the reins I’m going to say it’s because the horse has hit its groove).

A solid canter now. While this shot is more zoomed out it allows us to see just how straight Kim’s back is. He also appears to be using two hands now? An interesting choice given that he has been neck reining until now but, hey, it’s working for him and his rein pressure has remained consistent.

Kim Jong Un has a need for speed (but we already knew this from his relentless pursuit of ever faster intercontinental ballistic missiles)! His horse looks happy to be galloping. Look at how forward those ears are. I can’t tell if Kim went back to one hand on the reins and is letting the left hand down, or if he is grabbing mane…but no judgement here: that horse is flying. 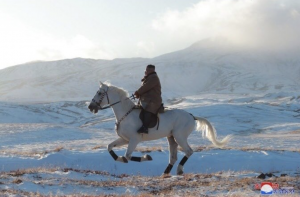 More galloping, different angle, definitely two hands on the reins. I’m going to have to give my first critique and say his hands were too close together in the other picture (unless he was holding mane, but he obviously isn’t here). His hands are also uneven and his leg has snuck up mighty far. And LOOK AT THOSE HEELS, they need to go down. Good thing his back is straight and his saddle is deep or he may have been left behind. 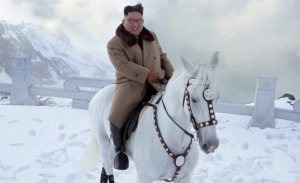 What a classic shot of a happy rider and their horse with a beautiful vista. Kim would rack up many likes on horsey Instagram for this one. That’s a pivot I’d like to see happen. The world is already so enthralled with these pictures it would be simple for Kim to give up his dictatorship and instead succumb to the siren call that is influencer status in a niche subgroup. 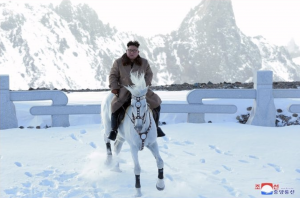 Saved the worst shot for last. Here, Kim has two hands on the reins again and the reins are obviously too long if he had to take his hand that wide and back to turn his horse’s head. If only he would rein in his nuclear program like he is his horse…

What have we learned from this? Kim Jong Un is a solid rider. He can stay on and direct his horse with confidence. Would he place in a show ring flat class? Likely not. And I sure would not want find out what happens when you hurt the fragile ego of a man in control of a nuclear arsenal. We’ve been tempting fate with Trump and I’d certainly not like to with anyone else. How about Kim gets off his (literal) high horse so we can get rid of nukes so all us horse people can enjoy communion with animals and nature in peace? I’m sure Kim would enjoy his ride more if he didn’t have to contemplate the continuation of a human-rights-abusing totalitarian regime and a nuclear weapons program.

Who knows? With all the free time he’d have by giving up North Korea’s nuclear arsenal he could pursue intensive riding lessons. Maybe we’d start seeing Kim on the international show circuit. Like Regina George channeling all of her aggression into sports, I think Kim Jong Un could stand to delve more deeply into the world of horses. I know all my other cares and troubles melt away when I’m with them. Who needs to strike fear into hearts around the world or maintain complete control of a geopolitical region when you are truly connecting with your horse for more than a staged government photo op? The answer: no one.