Defund the Police (and Nuclear Weapons While We’re at It)

Given the outcry for racial justice after the death of George Floyd this past summer, it is necessary that we as American people reevaluate our current political and economic systems, especially in relation to how they have affected people of color — specifically Black, Brown, and Indigenous communities. Defunding the police has become a prominent topic of discussion, where activists advocate for funneling funding out of police systems and into communities. This includes increasing funding for things that put people and the planet first, like education, affordable housing, and mental health services.

Similarly, the notion of defunding is also applicable in the context of nuclear weapons. Our government spends an exorbitant amount on nuclear weaponry, just as they do with police systems. Looking at this overlap of changing current systems, I, as a Beyond the Bomb fellow, interviewed Professor Alex Vitale, author of The End of Policing and coordinator of the Policing and Social Justice Project at Brooklyn College, about his thoughts on prison abolition, the current police state, and nuclear weapons. 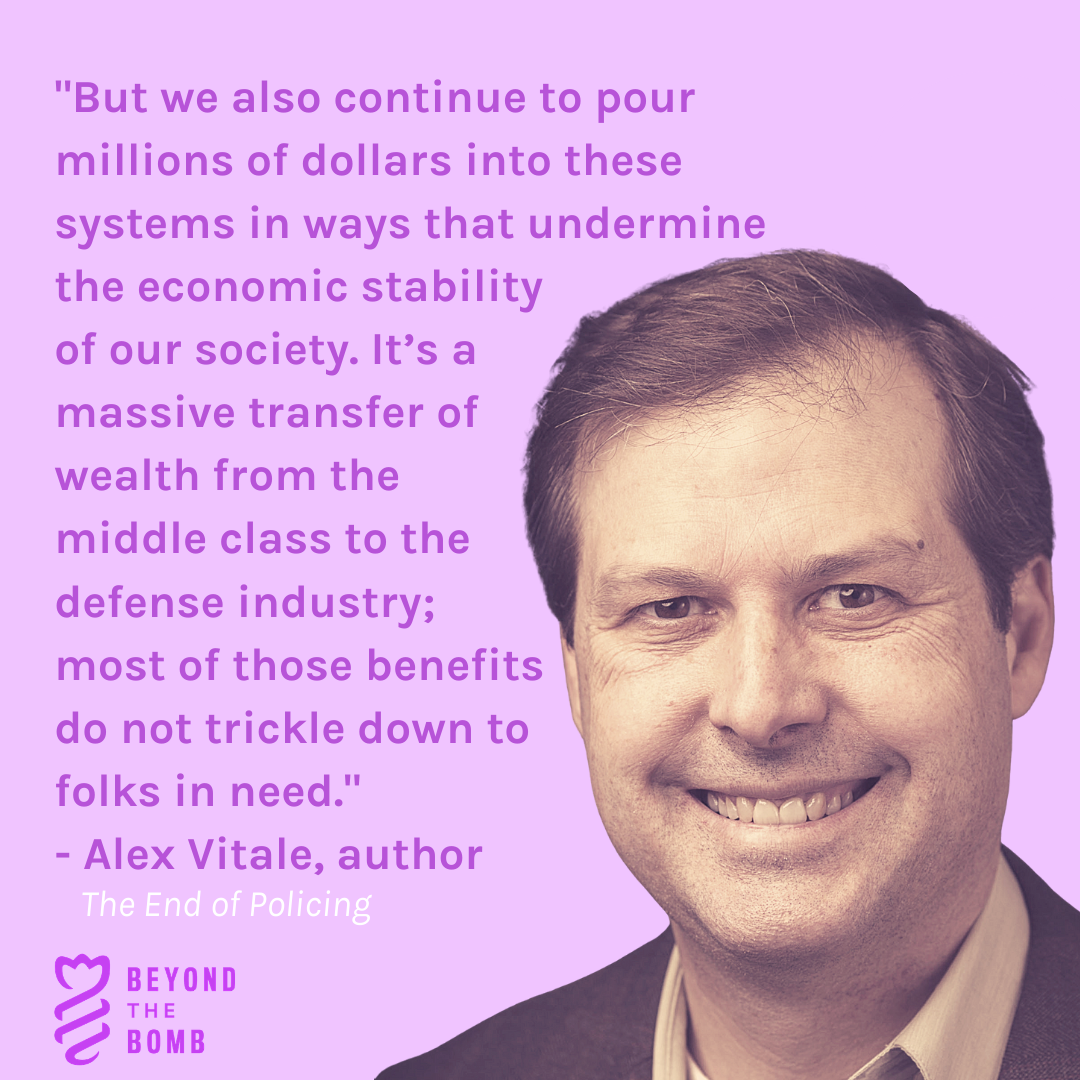 INTERVIEWER: What is your opinion on nuclear weapons as a form of oppression, especially given their effects on marginalized communities, specifically Black, Brown, and Indigenous people?

VITALE: Actually the first political work I did as a young person in high school was around nuclear weapons. I came of age in the Reagan era, a period of massive increase in nuclear weapons production and the Cold War standoff between the US and the Soviet Union at the time. And I was deeply concerned about the existential threat to society and also the way in which it was perverting our political system and its economic priorities. It doesn’t feel like such an essential threat anymore because we don’t have the Soviet Union and China aiming weapons at us the same way. But actually, these weapons still exist and those threats still exist, and I think that they are under-discussed. But we also continue to pour millions of dollars into these systems in ways that undermine the economic stability of our society. It’s a massive transfer of wealth from the middle class to the defense industry; most of those benefits do not trickle down to folks in need and it uses up resources that could be used to fix the homelessness problem, to provide high-quality education or healthcare services, etcetera. All of which exists in the service of a foreign policy that also does not benefit everyone. It benefits certain kinds of trade arrangements, multinational corporations, and plays into a foreign policy that aids dictators around the world.

INTERVIEWER: Thank you. Do you have any particular opinions on the No First Use nuclear weapons policy that Senator Warren actually discussed recently in which countries pledged not to use nuclear weapons unless another country attacked first?

VITALE: Well, I mean, it’s a kind of a small first step. I mean I’m in favor of policies that reduce the likelihood of an intentional or accidental weapons use, but it’s completely inadequate. What we need is a massive defunding. So I appreciate it but we need a much more robust shift.

INTERVIEWER: And do you believe all these reforms that we’ve discussed can be achieved through electoral politics in terms of just voting for the right candidate? Why, or why not?

VITALE: Perhaps I’m naively exactly optimistic, but I do think it is possible to achieve substantial change within our flawed liberal democratic system. And even if we think that that system is not capable of bringing these changes, or some of these changes, or their substantial limitations, I think that it’s important that our movements organize in relationship to those systems of liberal democracy and push them to the limits that we’re capable of pushing them. And then if we reach a point where that system is unable to accommodate our demands then we figure that out, what the next step is at that point. We can’t start from the assumption that those systems are incapable of providing anything. We have to concretely show that through the making of demands and seeing what we can get out of that system.

INTERVIEWER: And how would you recommend the average person try to get involved if they want to see these changes made?

VITALE: And I think that’s one of the exciting things about the moment that we’re in right now is that it seems like a whole generation of young people realized that they don’t have a future unless they are politically engaged. And so they’re joining environmental movements, they’re joining racial justice movements, they’re joining groups like the Democratic Socialists of America and this — I think whatever they join creates the possibility of a linkage to these various movements in an organized way. And I think that’s ultimately what’s needed. Protest is tremendously important, but it has to be strategic, and it has to be connected to institutional forms ultimately.

As said by Vitale, No First Use is a small first step in the right direction. Another example of a small step includes an amendment to the Fiscal Year 2021 National Defense Authorization Act currently in Congress, which would have cut the proposed $740 billion dollar budget by 10%, and instead reinvest those funds in critical human needs. Though the 10% cut failed this year, we’re not giving up hope for the future. Our strategy at Beyond the Bomb is to ensure that each action we take builds toward substantial change and a nuclear-weapons free future. To accomplish this change we need a chorus of voices across the country, calling on their leaders to reinvest in the public, and divest from weapons of mass destruction. We need YOU!