“Low-yield” nuclear weapons pose a catastrophic risk to our planet. We encourage all Representatives to co-sponsor this critical legislation which would reverse course on the development, production, and deployment of the W76-2.

The Doomsday Clock remains at the closest time it has ever been to midnight. We must do everything in our power to prevent it from moving forward any further.

The California State Senate passed AJR 30, a resolution urging Congress to speedily take up and pass the Restricting First Use of Nuclear Weapons Act of 2017. California is the first, but it will not be the only state to send this message to Congress.

Diplomatic engagement between Donald Trump and Kim Jong Un, even when it’s political spectacle, is major progress compared to recent threats of nuclear war. But it will take serious ongoing negotiations by experts and diplomats to achieve the goals laid out in the Trump-Kim statement. 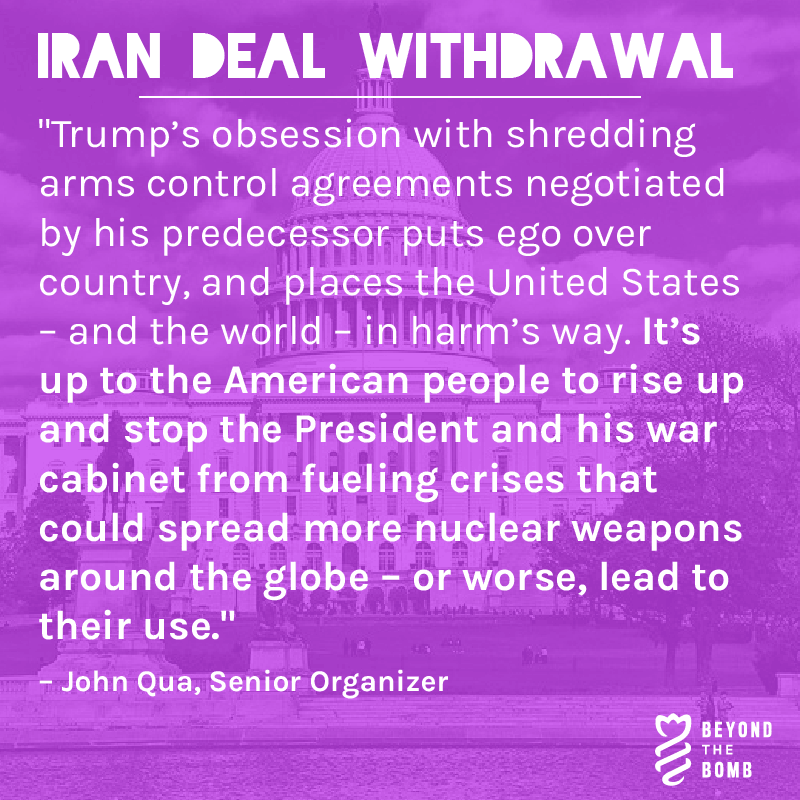 WASHINGTON, DC — Moments ago, President Trump announced that the United States would pull out of the Joint Comprehensive Plan of Action (JCPOA), also known as the Iran nuclear deal. In reaction to President Trump’s decision, John Qua, spokesperson for Beyond the Bomb, a new grassroots movement to prevent nuclear war, issued the following statement:… Read more »

Statement from John Qua, spokesperson for Beyond the Bomb, a new grassroots movement to prevent nuclear war, on Mike Pompeo’s confirmation at Secretary of State: “The Senate’s decision to confirm Mike Pompeo as Secretary of State is a slap in the face to America’s hardworking diplomats and an American public that’s rightly concerned about blundering… Read more »