Sign our open letter to Congress: “Trump is a bomb threat. It’s your job to control him.” 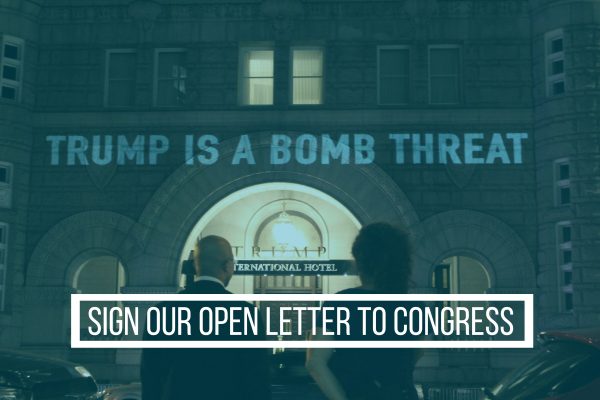 We write on behalf of progressive organizations and concerned individuals. Collectively we represent millions of Americans — and we’re angry. We’re angry because Donald Trump has absolute control over the U.S. nuclear arsenal and is steadily edging us closer toward nuclear war. Congress has the ability to rein in this world-ending power, but has mostly chosen to sit on the sidelines. This abdication of responsibility cannot continue.

Time and time again, Trump has proven just how dangerous it is for him to have thousands of nuclear weapons at his fingertips. He doesn’t believe in science and doesn’t consult experts. He repeatedly called for an expansion of the U.S. nuclear arsenal (reportedly by tenfold). He encouraged other countries to launch their own nuclear weapons programs and dared Russia to a new arms race. His erratic tweets and violent rhetoric have insulted leaders on the world stage, escalated delicate crises, and brought us to the brink of multiple wars. All in less than 12 months.

There’s no better example of the unique danger Trump poses than the unfolding crisis with North Korea, where his cavalier attitude towards nuclear war puts the whole world at risk. Trump should be doing everything in his power to reduce the threat of nuclear conflict by jumpstarting diplomatic talks with North Korea. Instead, he tweets schoolyard taunts at Kim Jong-un, threatens “fire and fury,” and orders increasingly provocative displays of force — all without any understanding of what is truly at stake.

To us it is clear: Donald Trump should not have the unilateral power to wage nuclear war. And the public is with us: the vast majority of Americans do not trust Trump to handle the crisis with North Korea, nor do they have confidence in his ability to deal with international conflicts writ large.

Trump’s bellicose rhetoric and reckless actions pose a clear and present danger to national security. We are one impulsive move away from a devastating war that could turn nuclear on a dime, killing millions. Yet while Americans are plagued with worry and experts are sounding the alarm, Congress has done nothing. This is unacceptable.

There are bills in Congress right now — including S.200 / H.R. 669, The Restricting First Use of Nuclear Weapons Act — that would rein in Trump’s absolute power over the U.S. nuclear arsenal and establish much-needed checks and balances over his nuclear launch authority. All of them have the support of top national security experts. As our representatives in Congress, we expect you to do your jobs and keep us safe. It’s long past time for you to intervene on our behalf and stand between Trump and the red button.

The majority of Americans agree: Trump is a bomb threat. It’s time you do something to stop him.