Boo For Bolton: The Intersectionality of Advocating Against Nuclear Weapons

On Wednesday, October 31st, Beyond the Bomb joined Women’s Action for New Directions (WAND), Win Without War (WWW), and Justice for Muslims Collective (JMC) in front of the White House to remember victims of white supremacist violence and call out the warmongering and racist influence of John Bolton, Donald Trump’s National Security Advisor. 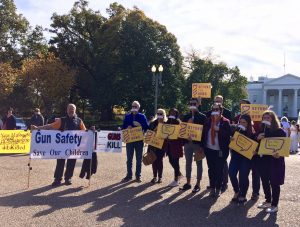 The Trump Administration has taken every opportunity to further marginalize communities at risk. The white supremacist and identity-based violence that occurred in the past week is the most recent manifestation of institutionalized violence that has been empowered by the Trump Administration. And the dangers of nuclear weapons cannot be separated from these hateful acts of violence. Even just the threat of nuclear violence reinforces oppressive systems of white supremacy and patriarchy. 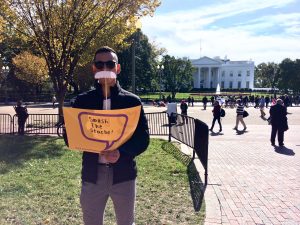 John Bolton is a threat to national security and nuclear non-proliferation. Read past blog posts here and here to learn why. 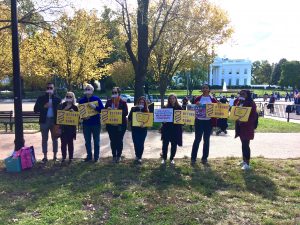 “Trump’s plan to withdraw from the INF Treaty is just another in a series of own goals committed by this administration that only serves to make America and the world more insecure. His decision probably would not have been possible without help from John Bolton, whose raison d’être is to upend international law and U.S. arms control commitments.” – Stephen Miles, Director of Win Without War

“John Bolton’s warmongering is a serious threat to national security and is rearing its ugly head with President Trump’s intentions to withdraw from the landmark INF treaty. At this time, when tensions are rising among nuclear armed states, we should be putting up more guardrails to prevent nuclear war, not tearing down the few we have left. That’s why we turned out to demand that the Trump Administration stay in the INF – and go a step further by establishing a No First Use policy.” – Cecili Thompson Williams, Director of Beyond the Bomb

How can we fight this? The first step is ensuring that no president can single-handedly launch a nuclear first strike. Learn more and sign our No First Use pledge here. 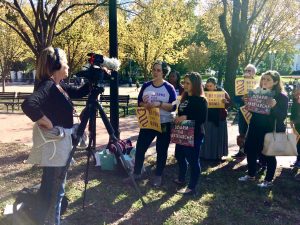 Angry about how white supremacists have been emboldened by the Trump Administration? Scared that Trump has sole authority to launch a nuclear first strike? Concerned about the influence of Bolton’s warmongering on Trump?

Get out and vote your conscience on November 6.