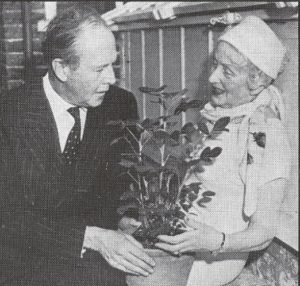 While the dawn of the atomic era gave rise to plenty of anxiety and paranoia, it also inspired some less-than-cautious optimism. It’s easy to see how the looming threat of nuclear holocaust spawned entire sub-genres of both pessimistic and reactionary science-fiction. But is that the whole picture? At the same time that schoolchildren began learning how to “duck and cover,” developments in nuclear energy led many to dream of effortlessly powering the world. In some respects, the atom became a symbol of an idyllic modern life, with its distinctive shape inspiring whimsical interior design elements for decades to come. An extremely cavalier attitude towards nuclear technology even infiltrated the toy market, where children bought radioactive atomic energy lab kits by the thousands. Looking back, we may be quick to mock the unique absurdity of the post-war obsession with the atom — but in a way it’s deeply relatable.

On December 18, 1953, President Eisenhower soberly addressed the United Nations General Assembly. In what became known as the Atoms for Peace speech, he acknowledged that the United States no longer possessed a monopoly on nuclear weapons. With multiple superpowers now stockpiling these tools of apocalyptic violence, he highlighted the necessity for a new path forward. Failure to move beyond the bomb would mean “confirm[ing] the hopeless finality of a belief that two atomic colossi are doomed malevolently to eye each other indefinitely across a trembling world.”

In the wake of Eisenhower’s pivotal speech, the Atoms for Peace program began. Famous for its role in establishing the International Atomic Energy Agency, Atoms for Peace also helped establish civilian nuclear programs around the world. At its core, the program put money and muscle behind the idea that nuclear technology’s peaceful applications could one day outshine its violent ones. Perhaps unsurprisingly, the initiative has been accused of hindering non-proliferation efforts, and even providing cover for American weapons buildup. Regardless of its true impact, Atoms for Peace’s central idea seems plausible on its face. After all, we benefit every day from nonviolent uses for the atom, and few examples of this fact are as fascinating or as bizarre as the atomic garden.

A fanciful process seemingly taken straight from a 50s monster flick, atomic gardening would revolutionize horticulture, at least for a time. In the 21st century, genetic engineering more commonly involves methodically splicing desired traits into an organism, a process which already attracts plenty of controversy. More interestingly though, in the aftermath of World War II, many daring individuals worked to develop new plant varieties head-on, indiscriminately barraging their fields with ionizing radiation until a useful mutation sprang up. Typically arranged in a circle with the radioactive source as the focal point, these “gamma gardens” boast a fanatical following and a long list of success stories. If you have ever bitten into a grapefruit or brushed your teeth with minty toothpaste, odds are decently good that you have enjoyed the creations of farmers who put ionizing radiation in the driver seat.

At its conception, the new frenzy took root everywhere, from government labs to suburban backyards. In keeping with the idealism of the Atoms for Peace program, mutant varieties were even born in the soil of former nuclear test sites, a poetic symbol for a more peaceful future. Simultaneously, the democratization of this technology meant that laymen — but more importantly, laywomen, could get their hands dirty in their very own gamma gardens. Whether through simply buying radiated seeds or by applying for a Cobalt-60 source with the Atomic Energy Commission, an enthusiast could try their luck at creating the next mutant variety.

Many early nuclear advocates emphasized the need for women to occupy the forefront of this sort of research, but an Englishwoman named Muriel Howorth made it her primary focus. Despite no scientific credentials to speak of, Howorth was known to correspond with legends like Albert Einstein when she wasn’t officiating meetings of The Ladies’ Atomic Energy Club. Howorth was an undeniably eccentric character, garnering attention for her bizarre methods of atomic evangelism. In one particularly publicized stunt, she hosted a meal in which she encouraged public sampling of irradiated foods. With great fanfare, she invited her guests to taste the NC4x peanut, the inspiration of this article.

Gamma gardening allowed countless regular people to have a personal stake in serious scientific debates that dominated their lives, while also presenting tangible evidence that a better world was possible.

Ever since I learned of Howorth’s obsession with NC4x, the nut has occupied a special place in my heart — and not just for its commendable size. As indicated by its name, NC4x hails from my home state of North Carolina. What’s more, it was invented at my very own North Carolina State University, one of several land-grant institutions that came out of the Morrill Acts of 1862 and 1890. Founded with the express purpose of making liberal and technical education attainable for the working class, the land-grant university system prides itself on, among other things, agricultural experimentation. To me, my institution’s strong connection to the atomic gardening craze stands as a testament to that founding mission. Coming from a poor farming family, the inventor of the NC4x became renowned in the field of crop science, even before he began experimenting with x-rays. Once he finally did, Dr. Walton C. Gregory made history by becoming one of the first atomic gardeners who successfully harnessed the atom in order to feed the world.

Atomic gardening brings with it a rich history and extensive cast of characters that extend far beyond the scope of this piece. Even without exhaustively cataloguing them all, one gets a taste of how exciting and confusing the dawn of the atomic age must have been. In a way, we still live in that moment. Although the Cold War has ended, we remain in constant danger of both accidental and intentional nuclear war. With President Trump still wielding sole authority to launch a nuclear first strike and critical weapons treaties approaching their expiration dates, the time to act is now. Particularly with respect to our future stewardship of nuclear technology, we live in a perilous time, but also one which promises hope. Gamma gardening allowed countless regular people to have a personal stake in serious scientific debates that dominated their lives, while also presenting tangible evidence that a better world was possible. In a time when insular groups of experts make life and death decisions on our behalf, maybe that’s not such a bad thing. The right mix of zany postwar optimism and people-power could go a long way towards achieving complete nuclear disarmament and a more responsible relationship with the atom.