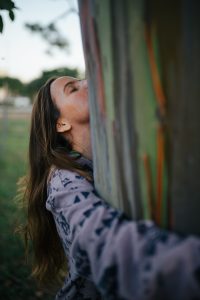 What do you picture when you hear the term, “Tree Hugger?” Bell bottoms and flower crowns? A 4/20-friendly free spirit? Maybe a nomadic band, tambourines and all.

Allow me to decolonize that image.

The term, “tree hugger,” finds its roots in the Garahwal forest of Uttar Pradesh, a north Indian state bordering the Himalayas. The Garahwalis possess a strong religious reverence for their land. Moreover, their dense vegetation provides both their food and lumber, and they are keenly aware of its role in water supply and soil conservation.

In the late 1900s, the Indian government adopted Western-style industrial policies that directly  jeopardized the sanctity of the forest and endangered its residents. As the threat of deforestation loomed, the Garahwalis looked inwards towards India’s rich history of ecofeminism.

Nearly 280 years before, the King of Jodhpur sent soldiers to Khejarli, the village of the Bishnoi people, to cut down the Khejri trees for the construction of a new palace. The Bishnoi faith venerates all forms of life, having a deep reverence for the Khejri tree. Upon arrival, one woman, Amrita Devi, clung to a Khejri tree and begged them to stop. Unmoved, the soldiers decapitated Amrita and began felling the trees. Amrita became a martyr for her people who followed her actions, losing their lives alongside their trees. When the King learned what happened, he repented and forbade the killing of animals and cutting of trees in the Bishnois territories.

Inspired by Amrita Devi, the villagers devised a plan: Chipko. Chipko, meaning “cling to” in Hindi, encouraged Garahwali women to weaponize their bodies as shields in a nonviolent protest. In 1971, as the commercial loggers neared, the Chipko women began their revolution. The women were joined by several prominent activists including Gandhian philosopher Sunderlal Bahuguna, activist Chandi Prasad Bhatt, and most notably, Gaura Devi, a local elder and environmentalist.

“This forest nurtures us like a mother; you will only be able to use your axes on it if you shoot me first.” Gaura Devi

In 1974, the women reached a milestone. That March, the government had secretly organized a pay-out to the village men for their forest in Reni, assuming the women would surrender with their husbands. They were sorely mistaken. Without a moment’s hesitation, Devi and her community barricaded their trees and confronted the armed laborers. The situation began to escalate. At the barrel of a gun, Devi famously shouted, “This forest nurtures us like a mother; you will only be able to use your axes on it if you shoot me first.” Her declaration forced the men to retreat and fueled the movement for another decade.

The Chipko Movement demonstrated a level of intersectionality we must strive for in our own activism today. Historically, Indigenous Women of Color have shouldered the greatest burden of climate injustice. At the intersection of race, gender, and economic disadvantages, they are uniquely situated to feel the exploitation of both women and the environment. Nevertheless, Indigenous women have proudly led the ecofeminist revolution for centuries — the Chipko women being only one example. Ecofeminism reminds us that we are dependent on our environment and, in turn, on each other. For this reason, we must work to amplify the voices of people who have long fought for comprehensive justice.

This Asian Heritage Month, we must honor the Chipko women by working towards a nuclear-free world. Total disarmament requires public policies that listen to and collaborate with the women most affected by nuclear weapons. Tell your representatives to support the No First Use Act to conserve our planet and the women who protect it.

Photo by Eddie Kopp on Unsplash