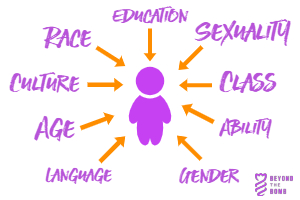 We have this gigantic nuclear problem for many reasons, the major being that men have historically been the only ones at the table for nuclear weapons decisions and peace talks, and that nuclear myths continue to be perpetuated. Part of the problem right now is that the nuclear debate is framed largely by the same people it was framed by during the Cold War – straight white men. Men have been in charge of nuclear weapons and nuclear discourse for far too long, skewing the debate. The patriarchy has systematically kept women from a seat at the table, from limiting the positions women can hold in the armed forces until 2013, to keeping them out of the room when decisions are being made.

I remember my World War II unit in eighth-grade social studies when my teacher went around the classroom and had each of us answer the question: “Should America have dropped the bombs on Hiroshima and Nagasaki?” What a loaded question to ask pimple-ridden, braces-wearing 13-year-olds! To my surprise, most said yes. This question, chock full of nuclear myths, echoes the idea that having more bombs than others keeps us safe, a naive idea that persists in political discourse today. Even though we know about the radiation poisoning and cancer nuclear weapons cause, and the weapons we have today would cause unprecedented catastrophe, the political discourse (dominated by men) has not changed.

The idea that “my nukes are bigger than yours” is a harmful, Cold War-era display of masculinity that we can no longer argue is necessary or appropriate in today’s discourse. It’s everywhere, and it’s due to the overemphasis on the relationship between masculinity and violence. Carol Cohn, founding director of the Consortium on Gender, Security, and Human Rights (and brilliant mind), confronted this issue head-on during her recent appearance on the podcast Press the Button, in the episode titled “Remembering Hiroshima and Nagasaki, and Why We Need a ‘No First Use’ policy.” “We overestimate the efficacy of violence and undercut its costs, and the reason that we do that is because it just feels right to us,” she states on the podcast. It feels right to us because toxic masculinity has dominated nuclear discourse. The notion that having the largest stockpile of nuclear weapons in the world ready to use at a moment’s notice keeps us safe is naive at best and catastrophic at worst. The notion that the U.S. will never use any of its 1,750 nuclear warheads currently deployed is ridiculous.

Men have created the rules of nuclear discourse, and we all are in danger because of it.

Luckily, there is a lot we can do! The great thing about intersectional solutions when it comes to nuclear weapons is that everyone can find identities and values they have in common. As Americans, one common value is the importance of the safety of American lives. Deterring nuclear violence, we can all agree, is a good thing! However, as nice as common values and civility are, true intersectionality requires that everyone understands how oppression works in order to take down oppressive structures. You don’t have to be a victim of Hiroshima or Nagasaki to understand its devastating effects. You don’t have to be a woman to fight for all women’s social and political equality. You don’t have to experience firsthand the impact of nuclear weapons to work toward total denuclearization. You just have to have an understanding of how these issues come into play intersectionally and feel the need to act.

Taking down oppressive structures is difficult. How is one person supposed to make a difference? Fortunately, there are tangible actions we can take to dismantle our patriarchal nuclear system. You can start by writing your representatives here and taking the pledge to support No First Use. Use your voice to vote for candidates who will work toward intersectional solutions. Confront the idea that violence makes good policy by working to undo toxic masculinity when you come across it. Engage with media written by women of color (Lorraine Hansberry, Dana Johnson, and Carmen Maria Machado are some of my favorites). Little by little, we can work toward a more just world.