American Exceptionalism at its Worst: Nuclear Testing and Climate Change in the Marshall Islands

Indulge my imagination for a second.

Let’s imagine you are living in a home that has been passed down in your family for countless generations. It is the only place you have called home, and the only place you want to call home. One day, a stranger comes to that home, kicks you out, burns the home down, and proceeds to plant harmful carcinogens in it. Your home is so badly destroyed that you cannot return for decades without getting fatally ill. Why do I bring this up? Because this is what the United States has done and continues to do to the Marshallese people.

Let’s continue this story. The only other home you can find is three blocks down, so once you move in, you can still kind of see your old home. However, this new home is far from perfect. This new home has a sinkhole in the back that keeps swallowing up more and more land. You watch the sinkhole get bigger every day, and you fear that it will swallow everything you have left. You want to take the thief to court to demand justice, or at least a big sum of money so you can move somewhere safe. Sadly, the person who ruined your house refuses to go to court, and you don’t have the means to force them there. At the same time, they are also being praised by the neighborhood for their ‘show of strength’ when they kicked you out, and still do not compensate you at all.

The United States’ first act of violence towards the Marshallese people was testing nuclear weapons on their land. Between the years 1946 and 1958, the U.S. conducted a total of 67 nuclear tests on the Marshall Islands. If those tests were combined evenly over 12 years, they would equal 1.6 Hiroshima-sized explosions every day. The nuclear tests the United States conducted left behind nuclear waste and radiation, making the testing grounds impossible to live on. 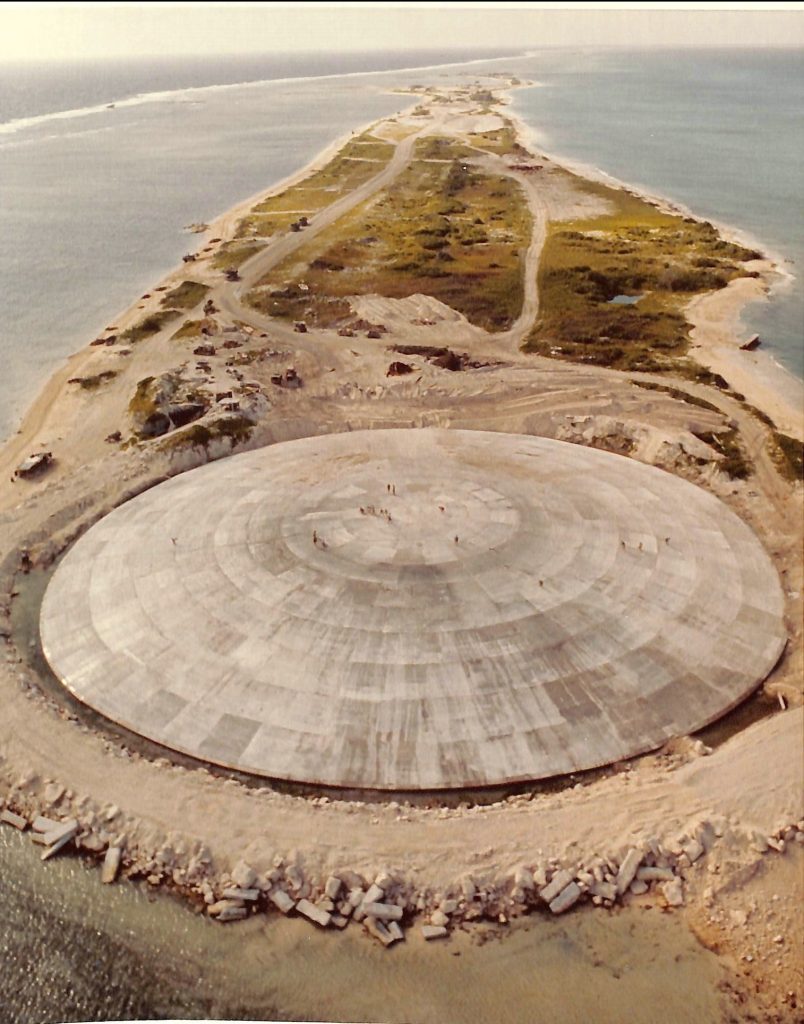 Sadly, the violence did not end with nuclear tests. The United States has continuously denied the impact of climate change and  has been a leader in CO2 emissions around the world.  The U.S. has also been steadily withdrawing from climate negotiations and treaties that would force them to take steps to reduce those emissions. As one of the richest countries in the world, the United States’ refusal to deal with climate change harms Marshallese people. As our climate changes, sea levels rise, which impacts the nuclear waste holding chasm, called The Tomb, in the Marshallese islands. This tomb, covered in a concrete dome that has begun to crack, was built by the U.S. to contain nuclear waste, but is being threatened by the rising sea level, which could cause the waste to seep out into potable water.

A rise in sea levels has caused increased contaminiation levels of fresh water supplies and destroyed crops. Even the smallest amount of salt water is undrinkable for people, and with rising sea levels contaminating groundwater aquifers, already at risk for radiation contamination, water shortages increase every year for the Marshallese.

The issues of climate change that the Marshallese are facing, further aggravated by climate change, are creating increased numbers of Marshallese refugees. And, the U.S. is not stepping up to the plate to make amends for the harm they have caused. In 1986, the U.S. gave a final cash settlement to the Marshallese of $150 million, which was meant to cover all the damage they had caused the island due to nuclear testing and destruction. The Marshallese were also meant to receive aid from the U.S. in the form of health care, though that was cut short through a loophole in the Personal Responsibility and Work Opportunity Reconciliation Act of 1996. Today, funding for the Marshallese is set to run out in 2022, and America does not seem closer to offering real, long-term help or solutions.

The United States has a duty to protect those it has harmed with its careless systemic violence. Marshallese refugees are not receiving funding to move to America and build new homes and a new life, even though the original ‘sins’ lie within actions from western countries, especially the U.S. The United States has taken advantage of a defenseless people and country because it knew it could and assumed there would be little to no retaliation. In continuing its violence towards the Marshallese, the United States is actively accelerating climate change.

The United States has a duty to protect those it has harmed with its careless systemic violence.

If this is the leader of the free world, what kind of free world are we really living in? If we do not protect those who have been oppressed and severely harmed by the leader of the West, we will be turning our backs on members of our human community.

Your power is important. Write to your representatives to demand they support the Radiation Exposure Compensation Act in order to provide health care protection to the Marshallese people. Donate to refugee orgs, such as the International Rescue Committee, Save the Children, or HIAS to protect others who will be harmed in similar ways by nuclear weapons and climate change. Push your representatives on their climate disaster platform – what are they willing to give up to protect us? Raise awareness by talking about these truths – this story is one which has not been heard by many people and public awareness of it must increase in order to obtain justice for the Marshallese. Know that your voice will be strengthening that of those not being heard, that are being brushed aside in the chaos of the moment. Never stop dreaming of the change that can come from the strength of your voice.