All I want for Christmas is…An Arctic Nuclear-Weapon-Free Zone.

Shelby Surdyk is the Project Coordinator for Point Hope: Alaska’s Youth Congress for the Global Elimination of Nuclear Weapons, which is organized by Veterans For Peace (Ch. 100) and will be held at Sitka Fine Arts Camp from April 6-10, 2020.

Let’s keep nuclear weapons out of the North Pole (and save ourselves from a nuclear winter).

December 1st, 2019 marks the 60th anniversary of the signing of the Antarctic Treaty. To celebrate that historic achievement, I’d like to take a moment to reflect on the significance of the Antarctic Treaty, as well as the Nuclear Freeze Campaign, Nuclear-Weapon-Free Zones (NWFZs), and the movement for a NWFZ in Earth’s other polar region – the Arctic. 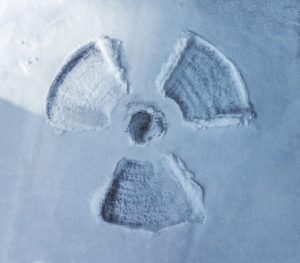 In 1983, the late, great Carl Sagan painted a horrific picture in the public mind of a nuclear winter – a future ecological collapse that would result from a nuclear war. According to Sagan’s dystopian prediction, ash and fallout from a nuclear war would block the sun’s rays from reaching our planet’s surface, leading to freezing temperatures and crop failures around the world. Fear of a nuclear winter added momentum to the Nuclear Freeze Campaign (the “freeze”), a global movement in the 1980s which called for nuclear disarmament.

Historians have credited the freeze with some major successes, such as building the political will needed for nuclear arms control treaties between the U.S. and Soviet Union at the height of the Cold War. The campaign also bolstered support for Nuclear-Weapon-Free Zones (NWFZs), which have made steady, stepwise progress towards global nuclear abolition.

The very first international agreement to establish a Nuclear-Weapon-Free Zone (NWFZ) was the Antarctic Treaty, which opened for signature on December 1st, 1959. The unprecedented treaty banned military bases, nuclear weapons testing, and radioactive waste disposal on the entire southern icy continent. As noted by the British Antarctic Survey, “There are few places on Earth where there has never been war, where the environment is fully protected, and where scientific research has priority.”

The Antarctic Treaty entered into force on June 23rd, 1961. Since then, five additional treaties establishing NWFZs have been negotiated. Each NWFZ treaty bans nuclear weapons from a specific region of the world: Treaty of Tlatelolco (Central America), Treaty of Rarotonga (South Pacific), Treaty of Bangkok (Southeast Asia), Treaty of Pelindaba (Africa), and Treaty of Semipalatinsk (Central Asia). Collectively, these treaties span the entire Southern Hemisphere. 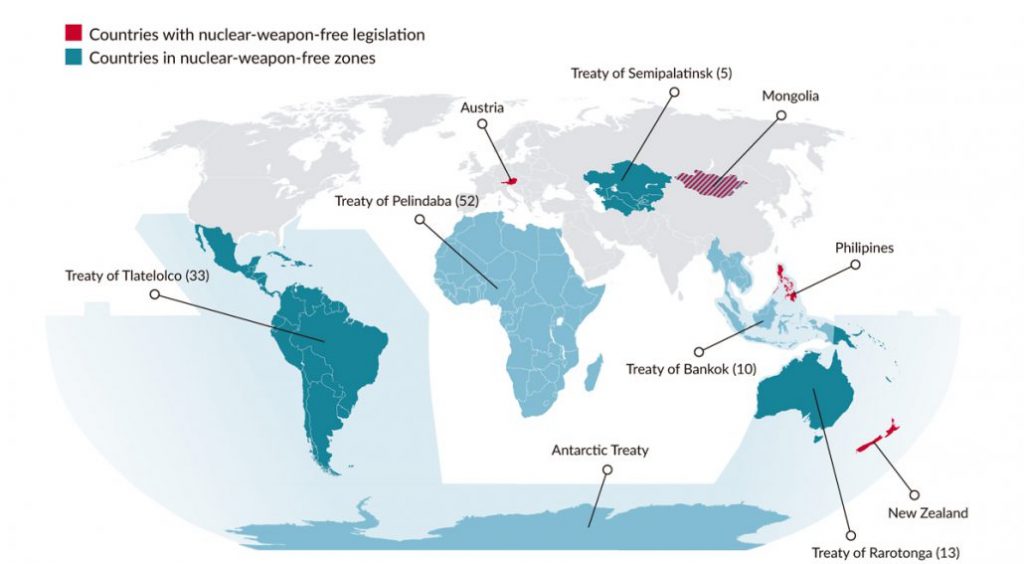 Where will nuclear bombs be banned next? Other countries and organizations are pushing for more regional NWFZ treaties. A number of NWFZs have been proposed in parts of the Northern Hemisphere, including Eastern Europe, the Middle East, and the Arctic.

The proposal for an Arctic NWFZ originated at the first Inuit Circumpolar Conference (ICC) in Utqiagvik, Alaska in 1977. The ICC passed a resolution in the spirit of the Antarctic Treaty, which called for the Arctic to be “used for peaceful and environmentally safe purposes only,” and for a moratorium on the “emplacement of nuclear weapons [in the Arctic].” In 1983, the ICC passed another resolution, this time specifically calling for a “Nuclear-Free Zone in the Arctic,” which would include banning nuclear power reactors and uranium mines from the far north. Since the 1960s, it has been known that Indigenous people in the Arctic have some of the highest concentrations of Strontium-90 in their bodies of any population in the world, due to the unique ways that nuclear fallout was transferred through Arctic food webs.

“There are few places on Earth where there has never been war, where the environment is fully protected, and where scientific research has priority.”

The ICC also had an ally in the Alaska State Legislature (Niilo Koponen, D – Fairbanks) who introduced a bill in support of an Arctic NWFZ during every term he was in office from 1982-1992. Alaska is America’s only Arctic state, and Koponen, along with co-sponsors Vic Fischer (D – Anchorage) and Jalmar Kerttula (D – Palmer), fervently believed that the state should support the ICC’s effort to ban nuclear weapons from the Arctic.

None of the resolutions in the Alaska State Legislature ever passed, and the ICC has yet to get its treaty. But a few organizations, including the Pugwash Society (Canada) and Veterans For Peace (USA), continue to carry the torch and advocate for an Arctic NWFZ. In line with that objective, the Juneau Chapter of Veterans For Peace is hosting Point Hope: Alaska’s Youth Congress for the Global Elimination of Nuclear Weapons. The event aims to engage up to 40 high school students from across Alaska, with a priority placed on participation by indigenous youth from rural Arctic communities. Standing on the shoulders of giants, it now up to the next generation to rid the Arctic of nuclear weapons.