74 years after Hiroshima and Nagasaki, but the work still goes on

This week marks the 74th anniversary of the bombing of Hiroshima, Japan, followed on August 9th by the anniversary of the bombing of Nagasaki. As we’ve been discussing here on the blog, these nuclear weapons were not only devastating to those cities and their inhabitants, but are small in comparison to the nukes we have today. But even before being aware of these facts, people far and wide have stood in solidarity with the survivors of these bombs, the Hibakusha, to say “no one should ever suffer as we have.”

How have these partners who are scattered around the world taken up the call from survivors?

Telling stories:
At a time when many Americans believed we were right to drop nukes on Japan, brave survivors stepped up to tell their stories and allies worked to get those stories to new audiences. A pivotal moment for this was the publishing of John Hersey’s Hiroshima. This collection of stories from Hibakusha humanized this event and made it impossible to ignore how everyday people were the victims of this atrocity. Hibakusha still share their stories today. Teachers across America are stepping up to share this perspective with their students when teaching about WWII. Stories cut through the noise to show real human impact. While I recommend picking up Hiroshima I also suggest you pay homage to this anniversary by reading some of the stories collected here. 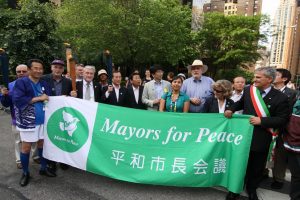 In 1982, then Mayor of Hiroshima, Takeshi Araki, called for cities to join Hiroshima in calling for the abolition of nuclear weapons. From that call Mayors for Peace was born. Today, nearly eight thousand cities are members across one hundred sixty three countries. Uniting mayors across borders for a common goal, Mayors for Peace exhibits the strength of numbers around the world calling for an end to nuclear violence.

Beyond the Bomb also works to harness the power of the local to change the conversation around nuclear weapons. Since 2018 we have been working in concert with other groups to pass city level resolutions calling for common sense policies, like No First Use of nuclear weapons. Passing local resolutions during the Cold War was a critical strategy of the nuclear freeze movement. Never discount the ability of your local actions to make big waves on the issues you care about! Want to start your own campaign in your area? See how to write a state/local resolution here.

Remembering and honoring:
Like storytelling, remembering ensures that these bombings are understood for the atrocities they were. Marking the days the bombs were dropped forces us to reckon with the decision our government made and reassess the role of nuclear weapons moving forward. Without days of remembrance it is easy to forget history, and in turn repeat it. Groups across the US and the world mark the only wartime nuclear weapons use with vigils, marches, rallies, and more. But no matter how the days are marked, people gather to show solidarity with a shared ideal that we should live in a world free from nuclear violence.

Stories cut through the noise to show real human impact.

Overhauling the system:
In the US the president has the sole power to launch a nuclear weapon on a whim. Because the US is the reason that lives were lost in Hiroshima and Nagasaki, we have a moral imperative to push for change to make sure that this does not happen again on our watch. And, luckily, there are people working to do just that! No First Use (NFU) is the most immediate way we can prevent a catastrophe like this from happening again. The will is there. 67% of Americans believe that we should have NFU, so let’s make that happen! Sign our pledge to add your voice to the conversation so we can keep pushing elected officials to be on the right side of history. 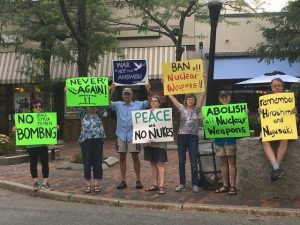 Let these anniversaries be a reminder to us of what nuclear weapons really do. They aren’t a magical war ending tool, they are civilization ending. We owe it to the victims and survivors of the only nuclear attacks to fulfill their vision of a world without nuclear weapons. So, however you decide to mark these days, let action for a better world follow.